Adam Lucas: Do What You Do 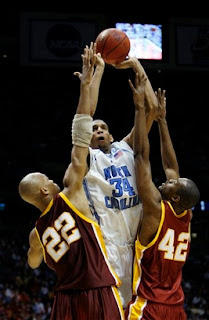 Adam Lucas on the win over Southern Cal.

You might not have seen it, but he was. There were four minutes and eight seconds left in the East Regional semifinal and his hands were on his hips, his mouth was wide open, and he was gasping for air.

Brandan Wright was shooting free throws, so Lawson took the opportunity to sidle over to the Carolina bench.

That is point guard speak for, "I need a rest."

Another time, another game, Williams would have looked down his bench and pointed his finger at Bobby Frasor or Quentin Thomas. "Get Ty," he would have said, and Lawson would have taken a seat beside Joe Holladay.

Not on Friday. Not in the middle of what was--according to sports information as of 2 a.m.--Carolina's best NCAA Tournament comeback.

Of course he is.

Four minutes left, round of 16, there is no other choice. This is the time that you do what you do. Lawson plays. We pray.

Wes Miller, for example. As Carolina stretched the improbable lead from three points to five points, the entire Tar Heel bench was standing--some of them, these 6-foot-6 trees, were standing on their tiptoes.

Not Miller. The shortest Tar Heel was crouched down, his hands on the floor. Asked what he was thinking right at that moment, right as he watched Danny Green coax a turnover out of Southern Cal, he said exactly what you were thinking and exactly what I was thinking:

"Whew. I was thinking I couldn't take it."

It's harder to watch than it is to play. Not physically. Physically it is not that difficult to sit in your recliner and watch the Tar Heels, rising only to protest the latest blown call or exchange a high five.

But mentally, it is harder. On the court, there is no time to think about what is happening. Just run down the court, run the offense, see the ball, crash the boards. That is why Green didn't have time to consider the ramifications of his enormous play that gave the Tar Heels the lead for the first time.

You remember it. Green got a steal out of a media timeout. He fired ahead, and it looked like Wayne Ellington was going to coast in for an easy dunk.

Except he missed it.

It wasn't quite Brian Reese's missed dunk against Cincinnati in 1993 in this same arena, but it was close enough to be painful. All this comeback, all this work, and now a dunk was bouncing off the back of the rim. There would be no one there to rebound it. This could be a comeback-snuffer. Surely Green would not have bothered to waste the energy to run down the floor and follow the play.

"No, no, no," said Green, who was playing in front of a sizable chunk of family and friends. "I wanted to chase it. I had to chase it. I thought he might get cut off and need to pass it back, so I wanted to be there for that. Luckily, Brandan and I were there to follow it up."

Yeah, that was pretty lucky. Or maybe it has to do with all those practices in an empty Smith Center, all those afternoons with Williams screaming, "Run!" at his team as they go through another 2-hour session.

Oh, about Williams. You were doing what you do. You changed seats or wore your lucky shoes or sat completely still lest you disturb the comeback mojo. And what did he do?

Exactly what he always does--let his team work through their problems.

He watched a 42-33 halftime deficit balloon to 49-33 with 17:43 remaining. There were no timeouts called. The lone timeout he used all game came with 0.8 seconds left in the first half, when the Tar Heels diagrammed a terrific play that gave Wayne Ellington a perfect look at a three-pointer, but it didn't fall.

How do you let your team fall behind by 16 points without calling timeout? Go ahead, admit it, you were saying that in your living room or in your seat at the Meadowlands. Call timeout, Roy! You don't get to take them home with you after the game!

How do you let that happen?

You trust your team. And they reward you.

"We look over at Coach Williams, and he's not calling a timeout," Marcus Ginyard said. "He's just telling us to get the ball up the floor and continue to play. All the players can feel the confidence Coach has in this team. It's really hard to say how important that is for a player, for a coach to feel that confident about his team and the way he knew we'd be able to come back."

Hey Roy, how about a favor? Next time, if you know it, can you flash us a little sign or something? Scratch your nose or cross your eyes or whatever it takes. Maybe then these games won't be quite so exhausting. How can a basketball game sap every ounce of your energy and at the same time wire you to the point that you can't sleep for hours?

There's bad news for Williams, too. At some point during the comeback, the Tar Heel bench turned into a melee. It was at about that point that Dewey Burke clocked his head coach in the jaw with a misplaced forearm. Burke later claimed that Wes Miller had initiated the contact that led to the collision. Williams wasn't having any of it.

"How many plus points does Dewey have?" he asked in a happy Carolina locker room. "I think we've got to take some away for that."

Well, OK. But just be aware it might be necessary to repeat the performance on Sunday. This is the NCAA Tournament and there are eight teams left. This is no time to take a chance. Ty and Brandan and Marcus and Danny and you other guys in argyle, you were important. But don't forget about the fan in Gastonia leaving the room, the diehard in Richmond changing into his lucky t-shirt, the slightly obsessive Tar Heel in Swansboro laying her hands on her team poster, and even William Graves and his magical shiny belt buckle (seriously, check it out).

"You know what I think the turning point of the game might have been?" Woody Durham asked after the Tar Heel Sports Network went off the air. "I think it was when I said, `Go where you go and do what you do.'"

Everyone nodded. It made perfect sense. Probably, he was right. It made as much sense as anything, because how else do you explain recovering from a 16-point second-half deficit in the NCAA Tournament?

Doing what you do--no matter who you are or what it is that you do, from the head coach right on down to whoever holds up the bottom end of the Tar Heel totem pole--did it. This was an acceptable explanation for what had just transpired. At some point, life will return to normal and you can drive to work on a different route or use a different toothpaste or wash your shirt.

Yes, it is irrational and it is silly.

Adam Lucas's third book on Carolina basketball, The Best Game Ever, chronicles the 1957 national championship season and is available now. His previous books include Going Home Again, focusing on Roy Williams's return to Carolina, and Led By Their Dreams, a collaboration with Steve Kirschner and Matt Bowers on the 2005 championship team.