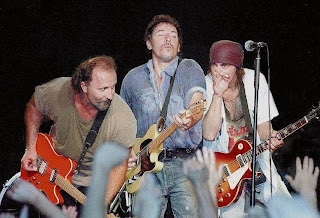 Bruce Springsteen and Miami Steve Van Zandt jam with Joe Grushecky and the Houserockers at Tradewinds in Sea Bright (7/22/95).

HAMILTON — With "a little bit of talent and a whole lot of vision," a Hamilton native is hoping to make his mark on the national music scene with a documentary film about an little-known — but important — musical figure.

"I started getting interested in making videos in 1998 when it started to become affordable with the digital age," said 1987 Ross High School grad Jim Justice, who now lives in the Columbus area.

He worked with local musicians and taped some shows for his brother Roland Justice, a member of the Nashville-based band the New Being Human.

"My big desire was to do a documentary film," he said.

He got more active in 2001 after meeting Columbus resident Steve Caniff at a Bruce Springsteen concert in Cincinnati.

They were already on-line acquaintances, participating in Springsteen bulletin boards, and finding themselves sitting next to each other struck up a conversation, discovering that they had a lot in common, especially their taste in music. Their friendship continued beyond the concert and they soon started looking for video projects to work on together.

In 2004, Caniff saw a CNN story about a Pittsburgh-area musician Joe Grushecky, who was a friend of Bruce Springsteen and a teacher in the Pittsburgh school system.

They dug into Grushecky's history and found out that every time Springsteen played Pittsburgh, Grushecky would sit in with him in front of thousands of people, then go back to his job teaching special education with what he calls "the forgotten kids," some of the city's most violent and difficult students.

In the late '70s, Rolling Stone magazine touted his first record "the debut album of the year," and his second album "an instant American classic."

Grushecky associated with some of rock music's elite, including Steve Van Zandt of the E Street Band, legendary guitarist Steve Cropper, and Ian Hunter and Mick Ralphs of Mott the Hoople, all of whom played on Grushecky records.

They found out that Springsteen produced and played guitar on a 1995 Grushecky album, "American Babylon" and then did a small tour with him, the superstar taking a supporting role as a guitar player.

"We thought, 'This could be our documentary,'" Caniff said. "This guy's got a phenomenal story."

"It's an amazing story, not just about a musician, but a story of determination, passion and desire," Justice said. "All these guys were behind him, but he didn't have the backing of the industry. In an era of soft pop and disco, he just didn't fit the mold."

The duo went to Pittsburgh to shoot one of Grushecky's shows in April 2005, and followed that up with a five-camera shot at the Hard Rock Cafe the next month, gradually building a friendship.

"Once he saw that we knew what we were doing, he was more interested in us doing a documentary on his life," Caniff said.

"We didn't have any experience doing something at this magnitude," Justice said. "He wanted to make sure we knew what we were doing and were serious about it. He wanted to move ahead. He's a very private guy and had to warm up to us."

The documentary includes interviews with a lot of Pittsburgh area musicians and industry officials, but the coup came last December when they went to the Light of Day music festival in New Jersey to interview the Boss himself.

"Joe takes a lot of flak from some Springsteen fans because they think he's just riding on Bruce's coattails," Caniff said. "But they're more than just good friends. Bruce's kids call Grushecky 'Uncle Joe' and what the fans don't realize is that Joe is the only person Bruce has shared co-writing credits on a song, including the Grammy-winning 'Code of Silence.'"

Grushecky is a regular headliner at Light of Day, an event organized by Springsteen's manager to benefit research for Parkinson's disease. Springsteen is never on the bill, but always makes an unannounced appearance.

During the interview, Springsteen was "extremely gracious and an incredibly nice guy," they said.

"He had a lot of nice things to say about Joe and their personal relationship," Justice said. "He credited Joe for being the driving force in getting the E Street Band back together a few years ago."

Not only did they conduct a 20-minute interview with Springsteen prior to the show, but they were also in the room when the Boss went over the set list with Grushecky's band, the House Rockers.

"It was really cool to sit in the room with Bruce while he's going over the chord changes, singing and playing the acoustic guitar, and except for the band, we're the only ones in the room," Justice said.

The documentary, "A Good Life: The Joe Grushecky Story," is due for a late September release, hoping to get into the fall film festivals, they said.

"Joe's story almost mirrors our story in a certain way," Caniff said. "We're two guys doing our day jobs, traveling all over the place trying to live out our dream, funding it 100 percent ourselves on our credit cards and selling things on e-Bay. We've had stuff stolen, but it's something we're passionate about."

Hence the name of their company: Flat Broke Productions.

They are also working on their next documentary, a true-crime story based on the book "A Year of Fear" about a pair of Columbus area brothers — Gary and Thaddeus Lewingdon — who in the 1970s killed 10 people in what has become known as "the .22 caliber murders."

or rjones@coxohio.com.
Posted by jtf at 1:19 PM