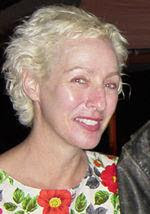 I loved Cathy Seipp’s writing, even though much of it was in areas I usually avoid like the plague:

1) She wrote media criticism, which is almost always the province of the indestructible ethics bores;

2) She wrote about hanging out in a glamorous city with a bunch of vaguely cool people you’ve never heard of, which grates very quickly on those of us who live in obscure zip codes where nothing ever happens;

3) She wrote droll observational scenes of everyday life, like all those leaden officially designated “humorists” in every newspaper across the land trying to wring 600 words out of the amusing aspects of barcode scanners;

4) And she wrote about the funny things her kid said, which is the kind of perilous terrain that leaves even the most well-disposed reader feeling like W. C. Fields.

But Cathy was the exception to the rule in all the above and many other areas. The media criticism was much needed in her home state, where she was a welcome disruption to the entertainment capital’s industrial production line of the world’s dullest journalists. Her analyses of the Los Angeles Times-servers were dead right, but my favorite moments were when some stylistic quirk caught her eye:
I almost didn’t finish reading Lopez’s column today because in the opening graph he wrote that he “motored about” L.A. to hear what people were saying about yesterday’s protests. Motored about? What is he now — Jeeves?
As for the hanging-out-in-LA stuff, Cathy wrote with a very unforced warmth that could make almost any of her pals sound like someone you’d like to meet, even when (as with my Spectator colleague Toby Young) you already have and wish you hadn’t. The observational humor usually turned up as an odd digression, as if she’d been motoring about and turned down a winding side street. A few years back, some guy sent her an e-mail to say half-an-hour earlier he’d just recognized her driving a gray Volvo east on Beverly Boulevard:
At least I didn’t attract his attention because I was picking my nose in the car, which people often do while for some reason assuming they’re invisible.

Sudden, horrible thought....or did I?
And, as for the kids-say-the-darnedest-things stuff, while trying to run down the above passage, I stumbled across this mother/daughter exchange after Maia somehow manages to get the wrong end of the stick on Hitchcock’s Rear Window :
“What a stupid movie! That’s the most terrible ending I’ve ever seen!”

“It’s happy now that Grace Kelly’s leg is amputated?”
Which is surreal. Although she was happy to describe herself as a Republican, I assumed at first she was a “conservative” mainly in the sense that there was a limit to the amount of solemn PC codswallop she was prepared to swallow. But in the end she was a more morally serious person than her Governor and most other prominent “moderate” GOP-ers. For example:
Well, as they used to say in gay circles, Silence=Death, and that’s been pretty much the official gay party line about the dangers of Islamofascism. (As it is also with feminist groups like Not in Our Name et al.) Here’s a typical post 9/11 news release from GLAAD: “Survey Finds LGBT Muslims Were Scared And Harassed After 9/11.”

Not scared or harassed in Iraq or Afghanistan or Egypt, but in the U.S. and Canada and Britain. Because compared to life under George Bush or Tony Blair, it’s all kite-flying fun and sales at Barneys in the average Islamist person-of-color dictatorship.
I’ve quoted her a lot here because I love the great brio of her writing. She was naturally funny, and so she had the confidence never to fake it. But she also communicated a great joy and relish in writing, and you’d be surprised how few writers do that. I also liked the way you never quite knew where the next paragraph would lead. She starts off in a doctor’s waiting room watching President Bush give a speech on Iraq while her fellow female patients hurl ever more demented insults at the screen, and she somehow winds up with:
The other constant refrain I’ve been hearing lately is from Lewis, who’s become obsessed with what he imagines is my father’s kinky and overly active sex life ever since he heard him moving furniture around downstairs one night and insisted it was the sound of...something else. So now every time he leaves a phone message, it’s “I guess you’re out buying your dad condoms,” or “Shopping for sheets?” Etc.

Occasionally he lays off for a while, but that’s only so he can hit me with it again when I least expect it. “Did you feel the earthquake last night?” Lewis asked a few days ago, when I made the mistake of picking up the phone.

“I don’t think there was an earthquake last night.”

“Well, you’re right, there wasn’t, but I thought there was. So I called the U.S. Geological Survey and they said, ‘No, no, it’s just that Harvey Seipp was having sex last night. We’ve been getting these calls all day.’”
Great writing is all about rhythm, and Cathy’s was beautiful. I shall miss her enormously.

— Mark Steyn is author of America Alone: The End of the World as We Know It.
Posted by jtf at 10:15 AM