John Fund: Whose Ox Is Gored? 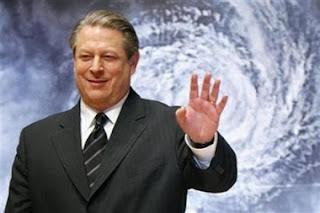 
The media are finally catching up with Al Gore. Criticism of his anti-global-warming franchise and his personal environmental record has gone beyond ankle-biting bloggers. It's now coming from the New York Times and the Nashville Tennessean, his hometown paper that put his birth, as a senator's son, on its front page back in 1948, and where a young Al Gore Jr. worked for five years as a journalist.

Last Tuesday, the Times reported that several eminent scientists "argue that some of Mr. Gore's central points [on global warming] are exaggerated and erroneous." The Tenessean reported yesterday that Mr. Gore received $570,000 in royalties from the owners of zinc mines who held mineral leases on his farm. The mines, which closed in 2003 but are scheduled to reopen under a new operator later this year, "emitted thousands of pounds of toxic substances and several times, the water discharged from the mines into nearby rivers had levels of toxins above what was legal."

All of this comes in the wake of the enormous publicity Mr. Gore received after his documentary "An Inconvenient Truth" won an Oscar. The film features Mr. Gore reprising his famous sighing and lamenting how the average American's energy use is greedily off the charts. At the film's end viewers are asked, "Are you ready to change the way you live?"

The Nashville-based Tennessee Center for Policy Research was skeptical that Mr. Gore had been "walking the walk" on the environment. It obtained public records showing that for years Mr. Gore has burned through more electricity at his Nashville home each month than the average American family uses in a year--and his consumption was increasing. The heated Gore pool house alone ran up more than $500 in natural-gas bills every month.

Mr. Gore's office responded by claiming that the Gores "purchase offsets for their carbon emissions to bring their carbon footprint down to zero." But CNSNews.com reports that Mr. Gore doesn't purchase carbon offsets with his own resources, and that they are meaningless in terms of global warming.

The offset purchases are actually made for him by Generation Investment Management, a London-based investment firm that Mr. Gore co-founded, and which provides carbon offsets as a fringe benefit to all 23 of its employees, ensuring that they require no real sacrifice on the part of Mr. Gore or his family. Indeed, their impact is also highly limited. The Carbon Neutral Co.--one of the two vendors that sell offsets to Mr. Gore's company, says that offset purchases "will be unable to reduce greenhouse gas emissions . . . in the short term."


The New York Times last week interviewed many scientists who say they are alarmed "at what they call [Mr. Gore's] alarmism on global warming." In a front-page piece in its science section, the Times headline read "From a Rapt Audience, a Call to Cool the Hype."

The Times quoted Don Easterbrook, an emeritus professor of geology at Western Washington University, as telling hundreds of experts at the annual meeting of the Geological Society of America that "I don't want to pick on Al Gore. But there are a lot of inaccuracies in the statements we are seeing, and we have to temper that with real data." Mr. Easterbrook made clear he has never been paid by any energy corporations and isn't a Republican.

Even James Hansen, a scientist who began issuing warning cries about global warming in the 1980s and is a top adviser to Mr. Gore, concedes that his work may hold "imperfections" and "technical flaws." Other flaws are more serious, such as Mr. Gore's depiction of sea level rises of up to 20 feet, which would cause Florida and New York City to sink below the surface.

Sober scientists privately say such claims are exaggerated. They point to the Intergovernmental Panel on Climate Change, a United Nations body that released its fourth report on global warming last month. While it found humans were the main cause of recent global warming, the report also indicated it was a very slow-moving process. On sea levels, the U.N. panel reported its s best high-end estimate of the rise in sea levels by 2100 was three feet. The new high-end best estimate is less than half the previous prediction, which was still far below Mr. Gore's 20 feet. Similarly, the new report shows that the panel's 2001 report overestimated the human influence on climate change since the Industrial Revolution by at least one-third.

In an email message to the Times, Mr. Gore defended his work as fundamentally accurate. But it's increasingly clear that far from the "consensus" on global warming we are told exists, scientists are having a broad and rich debate on many aspects of it. Nearly two decades after Mr. Gore first claimed that "we face an ecological crisis without any precedent in historic times," we don't know if that is really true.


Then there is the Gore zinc mine. Mr. Gore has personally earned $570,000 in zinc royalties from a mine his father bought in 1973 from Armand Hammer, the business executive famous for his close friendship with the Soviet Union and for pleading guilty to making illegal campaign contributions during Watergate. One the same day Al Gore Sr. bought the 88-acre parcel from Hammer for $160,000, he sold the land and subsurface mining rights to his then 25-year-old son for $140,000. The mineral rights were then leased back to Hammer's Occidental Petroleum and the royalty payments put in the names of Al Gore Jr. and his wife, Tipper.

Gore spokeswoman Kalee Kreider claims the terms of the 30-year Occidental lease agreement gave the Gores "no legal recourse" to get out of it. She said the Gores never thought about selling the land and would not comment on whether they ever tried to void the lease. "There is a certain zone of privacy once people go into private life," Ms. Kreidler said. She said critics of the arrangement should realize it should be viewed in a "1973 context, not a 2007 context. . . . There was a different environmental sensibility about all sorts of things."

But what about a 1992 context? That is the year Mr. Gore published "Earth in the Balance," in which he wrote: "The lakes and rivers sustain us; they flow through the veins of the earth and into our own. But we must take care to let them flow back out as pure as they came, not poison and waste them without thought for the future." Mr. Gore wrote that at a time when he would be collecting zinc royalties for another 11 years.

The mines had a generally good environmental record, but they wouldn't pass muster either with the standard Mr. Gore set in "Earth in the Balance" or with most of his environmentalist friends. In May 2000 the Tennessee Department of Environment and Conservation issued a "Notice of Violation" notifying the Pasminco mine its zinc levels in a nearby river exceeded standards established by the state and the federal Environmental Protection Agency. In 1996 the mine twice failed biomonitoring tests designed to protect water quality in the river for fish and wildlife. "The discharge of industrial wastewater from Outfall #001 [the Caney Fork effluent] contains toxic metals (copper and zinc)," the analysis stated. "The combined effect of these pollutants may be detrimental to fish and aquatic life."

The Gore mines were no small operations. In 2002, the year before they shut down, they ranked 22nd among all metal-mining operations in the U.S., with total toxic releases of 4.1 million pounds. A new mine operator, Strategic Resource Acquisition, is planning to reopen the mines later this year. The Tennessean reports that just last week, Mr. Gore wrote SRA asking it to work with a national environmental group as it makes its plans. He noted that under the previous operator, the mines had, according to the environmental website Scorecard, "pollution releases from the mine in 2002 [that] placed it among the 'dirtiest/worst facilities' in the U.S." Mr. Gore requested that SRA "engage with us in a process to ensure that the mine becomes a global example of environmental best practices." The Tennessean dryly notes that Mr. Gore wrote the letter the week after the paper posed a series of questions to him about his involvement with the zinc mines.


Columnist Steven Milloy recalls talking with Mr. Gore in 2006 about the 1997 Kyoto Protocol he helped negotiate as vice president. "Did we think Kyoto would [reduce global warming] when we signed it? . . . Hell no!" said Mr. Gore, according to Mr. Milloy. The former vice president then explained that the real purpose of Kyoto was to demonstrate that international support could be mustered for action on environmental issues. Mr. Gore clearly believes that the world hasn't acted with enough vigor in the decade since Kyoto, which may explain his growing use of the global-warming hype that concerns many mainstream scientists.