The deposits were too small, so the government cleaned out his bank account. 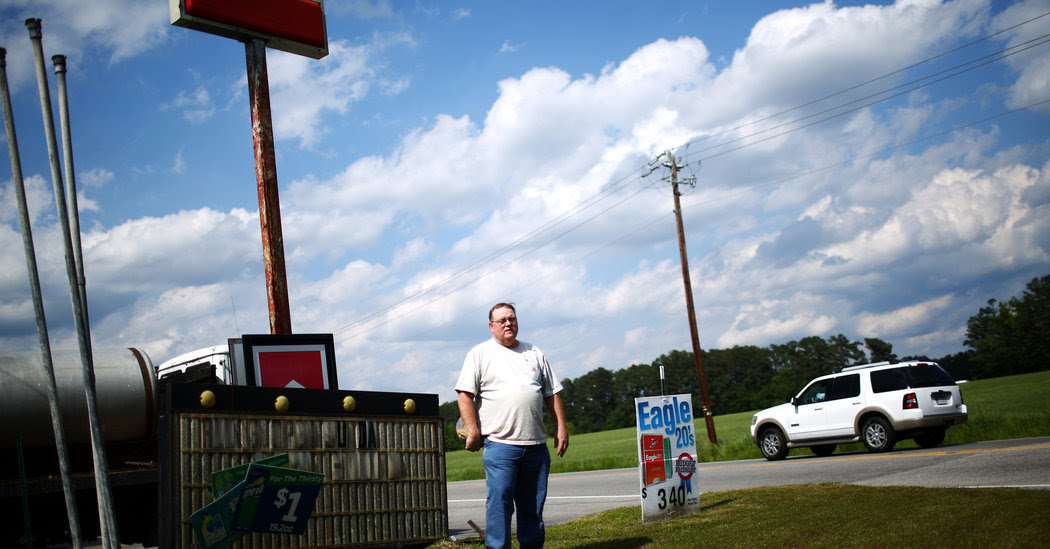 Lyndon McLellan, who owns a convenience store in Fairmont, N.C., is trying to recover $107,702.66, which was seized by the I.R.S. last year even though he was never charged with a crime. CreditTravis Dove for The New York Times

Last October, in response to the outrage provoked by "structuring" cases in which the government took people's money because their bank deposits were too small, the IRS said it would no longer do that unless there was evidence that the money came from an illegal source. In March the Justice Departmentannounced a similar policy for seizures based on structuring, which entails making deposits of less than $10,000 with the intent of evading bank reporting requirements. Yet both the IRS and the DOJ arecontinuing to pursue the forfeiture of $107,000 that belongs to Lyndon McLellan, the owner of a convenience store in rural North Carolina, based on nothing but suspicion of structuring.
As in other structuring cases, McLellan lost his money because of well-intentioned but bad advice from a bank teller. The teller told McLellan's niece, who usually handled L&M Convenience Mart's deposits, she could save the bank burdensome paperwork by keeping the deposits below $10,000, the reporting threshold. Based on the resulting pattern of deposits, the IRS cleaned out McLellan's bank account a year ago, even though there was no evidence that the money came from anything other than his perfectly legal business, which combines a store with a gas station and restaurant. The Institute for Justice, which is suing the IRS and the DOJ on McLellan's behalf, notes that "the government filed its forfeiture complaint in December 2014, two months after the IRS announced it would not forfeit money in cases like this one."
This is not the first time the IRS has seemed to violate its new policy, and the contradiction did not go unnoticed. On February 5, IRS Commissioner John Koskinen testified before the oversight subcommittee of the House Ways and Means Committee. Prior to the hearing, I.J. provided legislators with copies of the seizure affidavit and forfeiture complaint in McLellan's case. Without naming McLellan, Rep. George Holding (R-N.C.), a former U.S. attorney, asked Koskinen about the seizure:

Holding: Are you saying that under the new policy, you have to aver that we have probable cause to believe an illegal act is taking place other than the act of structuring?
Koskinen: Yes.
Holding: You sure about that?

Koskinen: That's what I'm advised by the people who run the Criminal Investigation Division.
Holding: The staff pulled for me a case from North Carolina, from my former prosecutorial district, after your policy change. And I've read through the affidavit and the associated documents. There's no allegation of illegal activity, other than the act of structuring...
Koskiken: If that case exists, it's not following the policy.

Once Koskinen's position came to the attention of Steve West, the federal prosecutor handling the case, the government apologized and gave McLellan his money back. Just kidding. Actually, West was pissed off that someone had dared to share documents from the case with members of Congress. After McLellan and his accountant emailed West video of Holding's exchange with Koskinen, the prosecutor responded with a rebuke:

I'm a bit concerned. At your request, I provided you a copy of the application for seizure warrant, which remains under seal with the Court, and now it appears it has been made available to a congressional committee? I do not know who did that, and I am accusing no one, but it was not from our office and could only have come from your clients. That was certainly not my intent in making this available. Whoever made [the document] public may serve their own interest but will not help this particular case.
Your client needs to resolve this or litigate it. But publicity about it doesn't help. It just ratchets up feelings in the agency.
My offer is to return 50% of the money. The offer is good until March 30th COB.

I.J. notes that the rationale for filing seizure documents under seal is to avoid tipping off the owner, lest he take his money and run. But in this case, the seizure had already happened, and the government had provided the documents to McLellan. "Sealed filings are intended to promote legitimate law enforcement interests," I.J. says, "not to allow prosecutors to evade public scrutiny." And it's more than a little unseemly for a prosecutor to imply that the bad feelings caused by such scrutiny might affect the outcome of a case.
Innocent property owners, deprived of the funds they need to run their businesses and pay their lawyers, often end up accepting deals like the one McLellan was offered, figuring half a loaf is better than none. But McLellan, with pro bono help from I.J., is determined to fight. "It took me 13 years to save that much money," he says, "and it took fewer than 13 seconds for the government to take it away."
Here is I.J.'s video on the case:
Related:

Rules Change on I.R.S. Seizures, Too Late for Some -

Email ThisBlogThis!Share to TwitterShare to FacebookShare to Pinterest
Labels: Iran

Even its fans have written boxing’s obit for decades, but the Mayweather-Pacquiao fight has the biggest purse in the sport’s history. Maybe boxing has a pulse after all.
By Allen Barra
http://www.thedailybeast.com/
May 2, 2015

Progressives Miss the Point of Baltimore

Sorry, folks: There are a lot of reasons Baltimore is in such dire straits, and making excuses for the riots and looting helps no one.
By John McWhorter
http://www.thedailybeast.com/
May 1, 2015 
SIMI VALLEY, Calif. — Before he became immortalized as the “Lone Survivor,” a Navy SEAL­ who escaped a 2005 Taliban ambush on a mountain slope in Afghanistan, Marcus Luttrell was a broken man in search of a haven.
He found it one day in spring 2007 when, struggling to recover his body and mind and with the horrors of war still raw, he showed up unannounced at the Texas governor’s mansion and asked to see Rick Perry.

The Lawbreakers of Baltimore—and Ferguson

The racial diversity of local government doesn’t matter when people want to seize on an excuse to commit crimes.

The racial makeup of city leaders, the police department and other municipal workers in Ferguson, Mo., played a central role in the media coverage and analysis of Michael Brown’s death, which is worth remembering as history repeats itself in Baltimore.
The Justice Department’s Ferguson report noted that although the city’s population was 67% black, just four of its 54 police officers fit that description. Moreover, “the Municipal Judge, Court Clerk, Prosecuting Attorney, and all assistant court clerks are white,” said the report. “While a diverse police department does not guarantee a constitutional one, it is nonetheless critically important for law enforcement agencies, and the Ferguson Police Department in particular, to strive for broad diversity among officers and civilian staff.”
Broad diversity is not a problem in Baltimore, where 63% of residents and 40% of police officers are black. The current police commissioner is also black, and he isn’t the first one. The mayor is black, as was her predecessor and as is a majority of the city council. Yet none of this “critically important” diversity seems to have mattered after 25-year-old Freddie Gray died earlier this month in police custody under circumstances that are still being investigated.
Some black Baltimoreans have responded by hitting the streets, robbing drugstores, minimarts and check-cashing establishments and setting fires. If you don’t see the connection, it’s because there isn’t one. Like Brown’s death, Gray’s is being used as a convenient excuse for lawbreaking. If the Ferguson protesters were responding to a majority-black town being oppressively run by a white minority—which is the implicit argument of the Justice Department and the explicit argument of the liberal commentariat—what explains Baltimore?
Tensions between the police and low-income black communities stem from high crime rates in those areas. The sharp rise in violent crime in our inner cities, which dates to the 1970s and 1980s, happened to coincide with an increase in the number of black leaders in many of those very same cities. What can be said of Baltimore is also true of Cleveland, Detroit, Philadelphia and Washington, D.C., where black mayors and police chiefs and aldermen and school superintendents have held sway for decades.
Chicago’s population is 32% black, along with 26% of its police force, but it remains one of the most violent big cities in the country. There were more than 400 homicides in the Second City last year and some 300 of the victims were black, the Chicago Tribune reports. That’s more than double the number of black deaths at the hands of police in the entire country in a given year, according to FBI data.
Might the bigger problem be racial disparities in antisocial behavior, not the composition of law-enforcement agencies?
It was encouraging to hear a few Baltimore officials say as much Monday night as they watched their city burn. “I’m a lifelong resident of Baltimore, and too many people have spent generations building up this city for it to be destroyed by thugs who, in a very senseless way, are trying to tear down what so many have fought for,” said Mayor Stephanie Rawlings-Blake.
City Council President Jack Young pointedly recalled the Baltimore riots after the assassination of Martin Luther King Jr. “We cannot go back to 1968 where we burned down our own infrastructure and our own neighborhoods,” he said. “We still have scars from 1968 where we had some burnt out buildings and businesses did not want to come back to the city of Baltimore. We have to stop the burning down and the breaking in of these stores because in the end it hurts us as a people.”
Sadly, Mr. Young could have been describing any number of cities that experienced black rioting in the mid-1960s and took decades to recover, if they ever did. The riot that began in the Watts section of Los Angeles in 1965 resulted in 34 deaths, 4,000 arrests and 1,000 looted or destroyed businesses. The Detroit riots two years later caused 43 deaths and destroyed 2,500 businesses. Before the riots, both cities had sizable and growing black middle-class populations, where homeownership and employment exceeded the black national average. After the riots, those populations fled, and economic deprivation set in. Some 50 years later, Watts is still showing “scars” and Detroit remains in the hospital.
The violent-crime rate in Baltimore is more than triple the national average, and the murder rate is more than six times higher. As of April, city murders are 20% ahead of the number killed through the first three months of last year. But neither Mayor Rawlings-Blake nor Mr. Young needs any lectures from the media on Baltimore crime. The mayor lost a 20-year-old cousin to gun violence two years ago. And earlier this month Mr. Young’s 37-year-old nephew died from a gunshot wound to his head. Even the families of black elites in a city run by black elites can’t escape this pathology.
Mr. Riley, a Manhattan Institute senior fellow and Journal contributor, is the author of “Please Stop Helping Us: How Liberals Make It Harder for Blacks to Succeed” (Encounter Books, 2014).
Posted by jtf at 6:19 AM No comments: