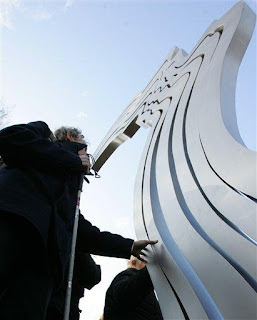 A blind man examines a newly unveiled sculpture in memory of slain film maker Theo van Gogh in Amsterdam, Netherlands, Sunday March 18, 2007. The sculpture was unveiled near the spot where the controversial film maker was murdered in 2004 by an Islamic extremist. Amsterdam mayor Job Cohen and a Dutch comedian praised Van Gogh and his work as the metal sculpture was revealed at a park in eastern Amsterdam.

AMSTERDAM, Netherlands – Friends and fans of the Dutch filmmaker found dead with a note pinned to his chest with a knife unveiled a memorial sculpture Sunday that depicts him screaming near the spot where he was murdered by an Islamic extremist.
Mayor Job Cohen and a Dutch comedian praised the controversial Theo Van Gogh and his work as the sculpture by Jeroen Henneman was revealed to hundreds of people gathered at a park in eastern Amsterdam.

Titled “The Scream,” the memorial took the form of a series of profiles of Van Gogh in stainless steel-coated ceramics, showing the film maker gradually opening his mouth into a scream.
Cohen said Van Gogh, whose work often offended sections of society, was not a loudmouth – as he was sometimes labeled by critics – but an artist with a clear message about freedom of speech.

Police patrolled the entrance to the park Sunday, but there were no protests and the atmosphere was festive.

Mohammed Bouyeri repeatedly shot Van Gogh in 2004 on an Amsterdam street, slit his throat and thrust into his chest a letter threatening the life of Ayaan Hirsi Ali, an outspoken critic of radical Islam. The brutal murder sparked a backlash that included the torching of several mosques.

Bouyeri – who is serving a life sentence for the killing – had been enraged by a film called “Submission” that Van Gogh made with Hirsi Ali, a member of parliament.

“Submission” was a fictional study of abused Muslim women, with scenes of near-naked women with Quranic texts engraved on their flesh.

Muslims called it blasphemous, but Hirsi Ali, who wrote the script, said the film gave voice to her dream of an Islamic Age of Enlightenment.
Posted by jtf at 8:24 AM