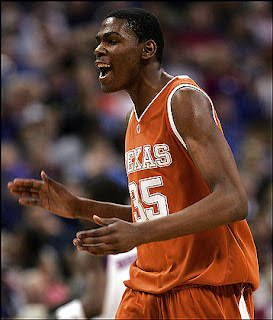 So far, everyone has done the right thing by Kevin Durant. The trick is not to do the wrong thing now. Why is it necessarily the smart choice for Durant to risk becoming another soured, over-moneyed performer with a leaner of a shot, playing too many minutes on a last-place NBA team that needs him to boost attendance?

You wait generations for a kid like this, a player so perfectly built it's as if he came from a kit. Watching Durant, you get the feeling that his parts were put together right, all the joints fit smoothly into the grooves, and everything is screwed tight, but not too tight. Just right. Every motion he performs seems correct, from the way he squares up to shoot to his courteous manner as he holds open a door. What's clear is that Durant is the product of great care and patience. What's also clear is that he shouldn't hasten his entry to the NBA if he's not ready.

Durant's draft status has been a subplot throughout his freshman season at Texas. With the Longhorns' elimination from the NCAA tournament last weekend, a decision looms: Should he make himself available, despite the fact that he's just 18 and probably 20 pounds too light, or stay in school? For some reason, the stakes seem higher for Durant than for other players who will be making the same decision. Maybe that's because he has the potential to be a three-octave performer if he continues to develop so beautifully. Or maybe it's because he's plainly so young for his age, and college so clearly suits him. "I do think this," Texas Coach Rick Barnes says. "I think he's never been happier."

He's something else, too, something you don't see much any more in the NBA, or college either. He's unspoiled. It's the great irony of Durant's situation: The thing that NBA teams and sneaker companies love most about him could be undermined by too-early entry to the league.

Fortunately, evidence suggests that his family doesn't believe in get-rich-quick schemes and is carefully outlining the pros and cons before making a decision. Durant already exhibits a promising trait: a sense of his own shortcomings. He gets this from his mother, Wanda Pratt. He was a senior at Montrose Christian School before she praised him for something he did on the court in the last game of his high school career. He had 31 points and nine rebounds and helped beat rival Oak Hill, the nation's top-ranked team, at the buzzer. "And she didn't say I played a great game," he says, "she just said I played a good game."

Durant's mother was a taskmaster by necessity. She was single for much of his childhood, raising him while separated from her husband Wayne, a security guard at the Library of Congress. Wanda, a postal office supervisor, rose every morning at 5:30 and was at work by 7, so it was Kevin's job to do all of the household chores -- clean the kitchen and wash the dishes, take out the trash and scour the bathrooms.

To keep Durant occupied after school, Wanda sent him to the Seat Pleasant Activity Center, where he picked up a ball for the first time. He was only 7 or 8, and he couldn't dribble or shoot, throwing the ball up from his shoulder. But even then, it went in. "I was horrible," he says. "But for some reason I would hit jump shots."

One night he went home and told his mother he had decided to be a ballplayer. Wanda treated the statement gravely. "Sleep on it," she said, "and tell me tomorrow if you're serious." When he said he meant it, Wanda turned him over for rigorous training to a Seat Pleasant coach named Taras Brown, who insisted he give up the pleasures of pickup and practice fundamentals instead. Brown made Durant dribble around cones, practice jab steps, and shoot the ball a thousand times a day. He conditioned by crab-walking up and down the court 10 times, balanced on his fingers and toes. Forward first, and then backwards. 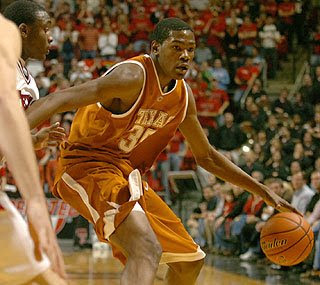 Worst of all were sprints up a 50-yard hill near the center, sometimes as many as 25 a day, which would leave him doubled over in pain at the top. From the peak, he could see the Washington Monument. "I hated that hill," he says. "Sometimes I wonder where [Brown] got that stuff from. I think he was crazy. Because that's not right."

He got no sympathy from Wanda, who if anything was even more demanding. When his worksheet called for 25 sprints, she would double it. "I think my mom's crazy, too," he says.

The goal of all that work has always been the NBA. Now that the opportunity is here, no one could blame Durant if he decides to seize it. The rewards of the draft are hard to resist -- and maybe he shouldn't. The choice is not simple: If he stays, he risks injury and could forfeit millions. If he goes, he forfeits time.

What's the best way for him to become a finished player? That's the real question. The finish is what counts; there are millions of aspirants in the world who start things and don't finish them, much less properly, whether novels, carpentry projects or to-do lists. Anything of real quality requires finish.

What brought Durant this far was a certain order and thoroughness, he is all about working in an organized way toward an end. Everything the family has done to date suggests that they see this as a slow, steady step-by-step process, one that has stressed fundamentals over shortcuts. They may decide that Durant won't be improved by haste now.
Posted by jtf at 12:38 PM