Does Soprano Get Whacked? Does He Get a Banana Split? 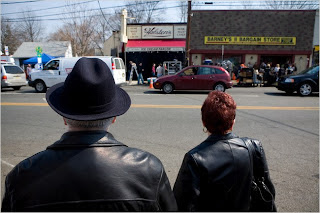 Onlookers gathered Thursday by an ice cream parlor in Bloomfield, N.J., for what some believed was the filming of the last scene of the last episode of “The Sopranos.”

BLOOMFIELD, N.J., March 22 — They gathered here — an old man in a black fedora and leather jacket, a woman in a tracksuit, a young mother pushing a stroller — for a final glimpse at Tony and Carmela and A. J. and Meadow.

As HBO’s television series “The Sopranos” films its final episode in this blue-collar town outside Newark, the citizens of New Jersey are, in many ways, rushing to get one last look at themselves.

So dozens of people crowded around Holsten’s Brookdale Confectionery on Thursday afternoon, though it was impossible to see the first family of fictional Mafia through the thick black shroud over the door of the old-fashioned ice cream parlor.

There was a man selling silk-screen T-shirts for $20 bearing a picture of the parlor and the words “The Final Episode.” Another claimed he was related to the actors Michael Imperioli (who plays Tony’s nephew Christopher) and Edie Falco (Carmela).

And there was much discussion of “whacking,” as in, “Is Tony going to get whacked?” — which was the question one woman put to a Bloomfield police officer at the scene of the scene.

“No,” the officer replied confidently.

For the past eight years, “The Sopranos” has played a pivotal role in defining New Jersey to the rest of the nation — from the shots of the New Jersey Turnpike and shops like PizzaLand in the opening credits, to people who pronounce “this” with a “d.” The series creator, David Chase, a New Jersey native, has said he insisted on filming here because the state is integral to the show.

Steven Gorelick, associate director of the New Jersey Motion Picture and Television Commission, estimated that the show had spent $60 million shooting (the nonlethal variety) in the state. “I think it’s given New Jersey as much fame as any project that’s been shot here,” he said. “When people watch it abroad, they say ‘Ahh, New Jersey. Sopranos.’ ”

But since it first went on the air in 1999, “The Sopranos” has had a complicated relationship with the Garden State. While many residents feel a sense of pride in the series, others, especially politicians, have complained that it plays to ugly stereotypes about Italians as thuggish criminals.

In 2000, James W. Treffinger, who was then the Essex County executive, banned the series from shooting there, saying it “stereotypes an ethnic group.” (Mr. Treffinger was later sentenced to 13 months in prison after being convicted of corruption.)

Such controversy did not escape Bloomfield, whose mayor and council initially denied a permit to film in town. That decision was later overturned, but not before the mayor, Raymond McCarthy, told The Associated Press, “I don’t think ‘The Sopranos’ depicts the life of a typical Italian-American in a positive way, and I still don’t like the way people see New Jersey based upon the ‘Sopranos’ series.”

Though the series has filmed in dozens of spots around the state — from exteriors of the Sopranos’ house in North Caldwell to a Jersey City cemetery near a turnpike overpass — there was particular fanfare around Holsten’s because of persistent reports that the Soprano family gathering would be the final scene of the final episode of the final season. But a spokeswoman for HBO noted, “Until Mr. Chase goes into the edit room, it would be impossible to say what the final scene will be.” 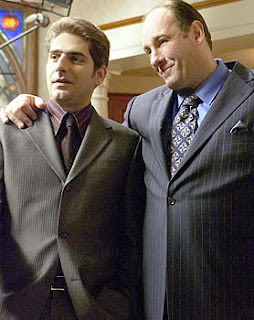 It was also impossible to know on Thursday what was happening behind the black curtain inside the ice cream parlor, but that did not stop a woman who had stayed home from work from calling in frequent updates to her boss as she sat on a folding chair across the street.

At one point, when James Gandolfini, who plays Tony, emerged from a van, someone in the crowd gasped, “Oh, my God!”

Outside Rita’s Water Ice nearby, Michael Masucci, 49, a beefy, goateed man in a dark tracksuit, surveyed the scene. “They say I have the look,” he confided. Though he had no luck snaring a walk-on role here, he said his Jeep had been used this month in a scene at the Bada Bing! club (a k a the Satin Dolls lounge on Route 17 in Lodi).

To Mr. Masucci, the uproar over the series had been silly. “Growing up here, you know there’s mobsters everywhere,” he said, adding that people were upset with the show only because some “don’t want to talk about the truth.”

Leo Mongiovi, 84, was decked out all in black: fedora, leather jacket, pants, sunglasses. He said he was retired from the wholesale meat business in Newark. While he was on his cellphone trying to persuade his wife to bring a chair down for him, a man spotted him.

“Hey, he looks like one of the actors here!” said Mike Markwith, 37. “Hired hit man over here!”