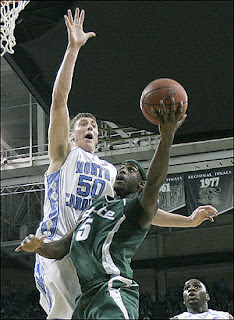 Adam Lucas on the win over Michigan State.

WINSTON-SALEM--In the wake of Saturday night's victory over Michigan State, Reyshawn Terry was looking for the right words to describe the Spartans. He pondered for just a second, and then he said this: "That is a tough team. The toughest team we've played all year long."

Tough is one of a basketball player's biggest compliments.

Sometimes, it is a synonym for dirty. Not on Saturday. On Saturday, tough meant tough.

"The big thing I noticed about them is their intensity and how hard they go through their offense," Marcus Ginyard said. "They really run through their sets hard and execute."

"They set great screens," said Wes Miller, who saw plenty of those screens first-hand while he was chasing Drew Neitzel. "You have to really make a commitment to getting through those screens or around those screens. That's the only way to play against them."

In most places, the story of the game will be Tyler Hansbrough's mask-less 33 points. Or maybe it will be Terry's now customary late game heroics. Or perhaps Ty Lawson's sheer domination of the game's tempo and his 20 points.

Not here. Here the story is something different. Here it is something that is not immediately evident on the stat sheet, unless perhaps you locate the 40-29 rebounding advantage against a team that entered the game fifth in the country in rebounding margin.

On the very first possession of the game, Lawson ripped the ball away from 6-foot-8, 235-pound Marquise Gray. With 8 minutes left in the half, Miller hurled himself on top of a loose ball near midcourt. On the sidelines, with the crowd roaring and the game in the balance late in the second half, Roy Williams was down in his fighting stance, pleading for just one stop.

Something has happened to these Tar Heels over the last two weeks. And even they're not sure they know exactly what it might be. Watch this group. Really watch them. Not just the player with the ball but all five Tar Heels on the court. For that matter, not just the ones on the court. Watch the bench, too. They've stopped talking about toughness and togetherness and they've started doing it. For the first six months of the season, they were happy to be pretty. Now, all of a sudden, they're gritty.

"It's hard to put your finger on," Ginyard said. "You come in the locker room and there's that feeling in the locker room. There's that excitement coming from everybody for the game. The bench gets into the games even more. You're starting to see those chest bumps again after good plays. At timeouts, the guys on the court are getting met at midcourt with high fives. The heart of this team is really starting to show." 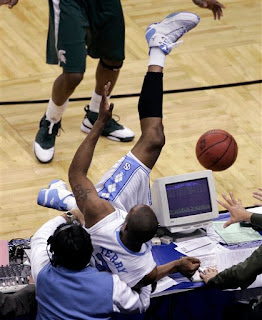 
You think it makes you happy to hear that? Imagine how it makes the coaching staff feel. Maybe that's why Roy Williams punctuated his customary writing of "16" on the white board in the locker room--to signify the teams left in the NCAA field--with a little dance shimmy lifted from Mike Copeland.

They do not award points for midcourt high fives, of course. But it pays off somewhere, somehow. A fragile team--and although this seems like ancient history right now, this team seemed fragile just two weeks ago--would have been ground into dust by Michigan State.

Here is what Michigan State does: they do exactly what they want. Every time. Carolina knew Neitzel was their primary offensive threat, knew he'd carry the bulk of the offensive load. And still he found 27 shots, admitting afterward that he'd never had that many shots in a game at any level. The Spartans ran him around screens. They chipped, they double-stacked, and on one particularly devious first-half play, they ran him around a double screen, took advantage of Carolina's overpursuit, and then sent him backdoor for a layup.

Four different Tar Heels--Ginyard, Miller, Lawson, and Quentin Thomas--took a turn on Neitzel. Finally, worn down by additional ball-handling duties caused by Travis Walton's foul trouble, the fatigue began to show. Neitzel bent over, his hands on his knees. When he stood, he put his hands on his hips, mouth open, trying to suck in a fresh breath of air.

"I wanted to be there every time," Ginyard said. "I wanted him to look for me every time he caught the ball."

Years from now, we'll probably remember Neitzel's 26 points and six 3-pointers. Lost only to history--and to the Carolina coaches--will be the fact that he only shot 33 percent from the field, and he had to hoist 17 trifectas in order to make six.

The Tar Heel offense will get the headlines on Sunday. The defense? It'll stay comfortably in the background.

"When you're on defense, you have to be thinking only about defense," Miller said. "The fact of the matter is, if you play defense, play with five guys moving together and finish it with a box-out and a rebound, you have a chance to beat anybody in any game."

And you have a chance to do something else, something that no one might have expected at the beginning of this month.

You have a chance to be tough.

Adam Lucas's third book on Carolina basketball, The Best Game Ever, chronicles the 1957 national championship season and is available now. His previous books include Going Home Again, focusing on Roy Williams's return to Carolina, and Led By Their Dreams, a collaboration with Steve Kirschner and Matt Bowers on the 2005 championship team.
Posted by jtf at 10:25 AM

Hi ! Nice blog. I've got one myself: Piggy Bank Check it out and let's exchange links.