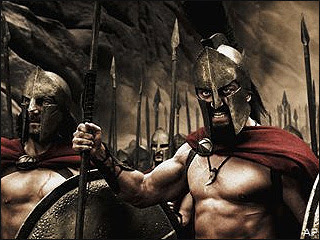 Crowds are flocking to see the film "300" about the ancient Spartans' last stand at the pass at Thermopylae against an invading Persian army. Yet many critics, in panning "300," have alleged that the film is essentially historically inaccurate. Are they right?

Here are some answers. But first two qualifiers. I wrote an introduction to a book about the making of "300" after being shown a rough cut of the movie in October. And, second, remember that "300" does not claim to follow exactly ancient accounts of the battle of Thermopylae in 480 B.C. Instead, it is an impressionistic take on a graphic novel by Frank Miller, intended to entertain and shock first, and instruct second.

Indeed, at the real battle, there weren't rhinoceroses or elephants in the Persian army. Their king, Xerxes, was bearded and sat on a throne high above the battle; he wasn't, as in the movie, bald and sexually ambiguous, and he didn't prance around the killing field. And neither the traitor Ephialtes nor the Spartan overseers, the Ephors, were grotesquely deformed.

When the Greeks were surrounded on the battle's last day, there were 700 Thespians and another 400 Thebans who fought alongside the 300 Spartans under King Leonidas. But these non-Spartans are scarcely prominent in the movie. 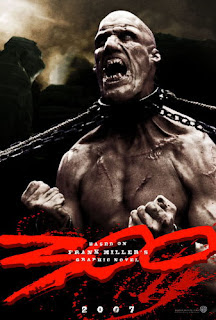 A small contingent of Greeks at Thermopylae (which translates to "The Hot Gates") really did block the enormous Persian army for three days before being betrayed. The defenders claimed their fight was for the survival of a free people against subjugation by the Persian Empire.

Many of the film's corniest lines - such as the Spartan dare, "Come and take them," when ordered by the Persians to hand over their weapons, or the Spartans' flippant reply, "Then we will fight in the shade," when warned that Persian arrows will blot out the sun - actually come from ancient accounts by Herodotus and Plutarch.

The warriors of "300" look like comic-book heroes because they are based on Frank Miller's drawings that emphasized bare torsos, futuristic swords and staged fight scenes. In other words, director Zack Snyder tells the story not in a realistic fashion - like the mostly failed attempts to recapture the ancient world in recent films such as "Troy" or "Alexander" - but in the surreal manner of a comic book or video game.

The Greeks themselves often embraced such impressionistic adaptation. Ancient vase painters sometimes did not portray soldiers accurately in their bulky armor. Instead, they used "heroic nudity" to show the contours of the human body.

Similarly, Athenian tragedies that depicted stories of war employed contrivances every bit as imaginative as those in "300." Actors wore masks. Men played women's roles. They chanted in set meters, broken up by choral hymns. The audience understood that dramatists reworked common myths to meet current tastes and offer commentary on the human experience.

Some reviewers think the film is gratuitously violent. But Thermopylae was no picnic. Almost all the Spartans and Thespians were killed, along with hundreds from other Greek contingents. Some of the film's most graphic killing - such as Persians being pushed over the cliff into the sea - derives from the text of Herodotus. And the filmmakers omitted the mutilation of King Leonidas, whose head Xerxes ordered impaled on a stake.

Finally, some have suggested that "300" is juvenile in its black-and-white depiction - and glorification - of free Greeks versus imperious Persians. The film has actually been banned in Iran as hurtful American propaganda, as the theocracy suddenly is reclaiming its "infidel" ancient past.

But that good/bad contrast comes not from the director or Frank Miller, but is based on accounts from the Greeks themselves, who saw their own society as antithetical to the monarchy of imperial Persia.

True, 2,500 years ago, almost every society in the ancient Mediterranean world had slaves. And all relegated women to a relatively inferior position. Sparta turned the entire region of Messenia into a dependent serf state.

But in the Greek polis alone, there were elected governments, ranging from the constitutional oligarchy at Sparta to much broader-based voting in states like Athens and Thespiae. 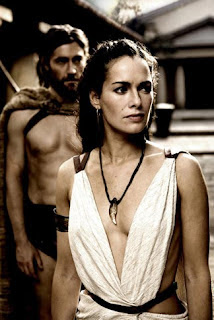 Most importantly, only in Greece was there a constant tradition of unfettered expression and self-criticism. Aristophanes, Sophocles and Plato questioned the subordinate position of women. Alcidamas lamented the notion of slavery.

Such openness was found nowhere else in the ancient Mediterranean world. That freedom of expression explains why we rightly consider the ancient Greeks as the founders of our present Western civilization - and, as millions of moviegoers seem to sense, far more like us than the enemy who ultimately failed to conquer them.

Victor Davis Hanson is a classicist and historian at the Hoover Institution, Stanford University, and author, most recently, of "A War Like No Other: How the Athenians and Spartans Fought the Peloponnesian War." You can reach him by e-mailing author@victorhanson.com.
Posted by jtf at 8:09 AM