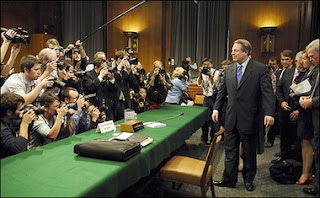 Photographers greet former US Vice President Al Gore before he testifies before the Senate Global and Public Works Committee on Capitol Hill in Washington, DC.

March 22, 2007 -- AL Gore was born and spent most of his life in Washington, D.C. Yesterday, he returned to the fever swamp to show he's forgotten none of his old political tricks.

Addressing the House and Senate on global warming, he put forth a litany of half-truths that he twisted into a morality tale. But the facts tell a different story. The former veep is a master politician, not a prophet or a planetary savior.

Gore's biggest rhetorical trick is saying that the Earth has a fever. He says that 10 of the hottest years in history came in the last 11 years, and this proves we must do something, because, "If your baby has a fever, you go to the doctor."

This is meaningless. The Earth has been much, much hotter in the past than today. No giant space nanny fed it medicine.

It's also had periods like today, when temperatures are flat - there hasn't been much warming since 1998. Yes, it's warmer today than it was a hundred years ago, but that's not necessarily a bad thing. Talking about fevers is misleading, but it's a great rhetorical trick.

And when it comes to the economics of the issue, Gore is way outside the mainstream. Appearing before a House committee, he said that changing the American economy in the way he proposes - a plan of freezes, taxes, market controls and regulations that would represent a massive expansion of government control over the economy - would not be costly.

Yet he also endorsed the ill-fated Kyoto Protocol (which he helped negotiate). The U.S. Energy Information Administration calculates that Kyoto would reduce U.S. gross domestic product by $100 billion to $400 billion a year.

Gore is a very wealthy man, but it's hard to see why he can't recognize that this is a lot of money lost - and a lot of jobs lost and a lot of families going cold and hungry.

How does Gore address this point? He doesn't; he simply avoids it, with highfalutin rhetoric. It's not just the Earth's "fever" and our supposed moral duty to cure it; he says our descendants will either condemn us as blind or praise us for our moral courage. He also makes veiled references to himself as Churchill, while all around him others appease fascism.

It's not subtle stuff - nor accurate.

If you establish that the Earth is warming, it doesn't necessarily follow that we have a moral duty to reduce emissions. What should follow is an informed debate about the costs and benefits of various policies to address that warming - reducing emissions is just one possible answer. Another debate should focus on those policies' economic costs.

Al Gore doesn't want to have those debates, because the majority of evidence suggests that emissions reduction will be very costly and will have little effect. Kyoto, fully enacted by all its parties, would for all its cost reduce global warming by a mere 0.07 degrees Celsius by 2050 - a barely detectable amount.

Meanwhile, 2 billion people around the world go without electricity. About 3 million die each year because of fumes given off by primitive stoves. The U.S. economy sneezes when gasoline hits $3 a gallon.

If we have a moral duty, it's to keep energy affordable here and to expand access to it overseas. That's the real moral truth, however inconvenient for Al Gore.

Iain Murray is senior fellow in Energy, Science and Technology at the Competitive Enterprise Institute in Washington, D.C.
Posted by jtf at 7:54 AM