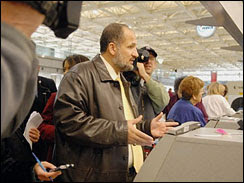 Omar Shahin, one of six imams removed from a US Airways Phoenix-bound plane at the Minnepolis-St. Paul International Airport, waits at the Northwest counter, where he successfully purchased a ticket on Tuesday, Nov. 21, 2006.

MINNEAPOLIS--The land of 10,000 lakes and that welcoming attitude we call "Minnesota Nice"--is becoming a window on America's potential future. Here in Minneapolis, one of the nation's most livable cities, hard-line Muslim activists are injecting an element that is anything but nice.

Troubling incidents began several years ago, when taxi drivers at the Minneapolis-St. Paul International Airport--about three-quarters of whom are Muslim--started refusing to transport passengers carrying alcohol. One woman, returning from France with wine, was turned away by five cabs in succession. Refusals of service now number about 100 a month, and heated altercations have erupted.

In September 2006, the Metropolitan Airports Commission (MAC) proposed a two color top-light pilot project to indicate which drivers would accept passengers with alcohol. The proposal, later dropped, would apparently have marked the first time that a government agency in the U.S. officially recognized Shariah law, and distinguished individuals who follow it from those who don't.

In November 2006, the six "flying imams" bumped the taxi drivers from the headlines. In Minneapolis for a conference, the imams were detained after engaging in what an airport police report called "suspicious" activity. Some prayed loudly in the gate area, spoke angrily about the U.S. and Saddam, switched seats and unnecessarily requested seat belt extenders with heavy buckles that could be used as weapons, according to witnesses. They were questioned and released later that day. The imams denounced the incident as racial and religious profiling. "If up to now, [Americans] don't know about prayers, this is a real problem," said Omar Shahin, one of the detained men and head of the North American Imams Federation. Twin Cities imams demanded a separate Muslim prayer room at the airport.

Earlier this month, the six imams filed suit in U.S. district court in Minneapolis against US Airways and the Metropolitan Airports Commission, claiming discrimination and defamation. Now some Muslim cashiers at Twin Cities Target stores have begun refusing to scan pork products, like bacon and pepperoni pizza, and insisting that other cashiers or the customers themselves do it.


What's going on? It appears that both local circumstances and activists with a big-picture agenda play a role. Take the taxi drivers. Minnesota is home to tens of thousands of Somalis, most recent immigrants. Behind the scenes, moderate local Somali leaders are engaged in a power struggle with national Muslim organizations that seek to exploit this vulnerable population. Islam prohibits the consumption of alcohol but not its transportation, say Somalis who reject the taxi drivers' stance. Yet in June 2006, the Muslim American Society's (MAS) Minnesota chapter issued a "fatwa" forbidding drivers here from carrying alcohol to avoid "cooperating in sin."

Hassan Mohamud, one of the fatwa signers, praised the two top-light proposal as a national model for accommodating Islam in areas ranging from housing to the workplace. But according to Omar Jamal of the Somali Justice Advocacy Center in St. Paul, MAS is "trying to hijack and radicalize the Somali community for their Middle East agenda."

Ahmed Samatar, a recognized expert on Somali society at Macalester College in St. Paul notes that "There is a general Islamic prohibition against drinking, but carrying alcohol for people in commercial enterprise has never been forbidden." Similarly, Islam prohibits consuming pork, but not touching or scanning it, according to Imam Feisal Abdul Rauf of the American Society for Muslim Advancement in New York. It is, or should be, "a nonissue."

In Washington, the Democratic leadership is likely to seek passage of the End Racial Profiling Act, of which House Speaker Nancy Pelosi called herself, in 2004, a "proud" cosponsor. Both MAS and CAIR are stumping for the bill, which would bar airport security personnel from disproportionately questioning Muslims or people of Middle Eastern descent. Minnesota's Keith Ellison, the nation's first Muslim Congressman, told me that the imams' situation reflects a misunderstanding of Muslim prayer and will be sorted out in court, while the other matters stem from the normal process of immigrant adjustment.


The events here suggest a larger strategy: By piggy-backing on our civil rights laws, Islamist activists aim to equate airport security with racial bigotry and to move slowly toward a two-tier legal system. Intimidation is a crucial tool. The "flying imams" lawsuit ups the ante by indicating that passengers who alerted airport authorities will be included as defendants. Activists are also perfecting their skills at manipulating the media. After a "pray-in" at Reagan National Airport in Washington, D.C., one credulous MSNBC anchor likened the flying imams to civil rights icon Rosa Parks.

The comparison is misplaced: Omar Shahin, leader of the detained imams, has helped raise money for at least two charities later shut down for supporting terrorism. From 2000 to 2003, he headed the Islamic Center of Tucson, which terrorism expert Rita Katz described in the Washington Post as holding "basically the first cell of al Qaeda in the United States." CAIR has long been controversial for alleged terrorist ties, while the Chicago Tribune has described MAS as the American arm of the fundamentalist Muslim Brotherhood, which "preaches that religion and politics cannot be separated and that governments eventually should be Islamic."

So far, Minnesotans have said a resolute "no" to Muslim activists' agenda; in an informal Star Tribune poll, 92% of respondents blamed the imams' own behavior for their airport detention. And Target--after unsuccessful attempts to accommodate Muslim cashiers--is reassigning them to other jobs. Still, there is a sense that we've seen just the opening skirmishes. As MAC spokesman Patrick Hogan put it, "I think people are afraid there will be a chapter two."

Ms. Kersten is a columnist for the Minneapolis Star Tribune.
Posted by jtf at 6:52 PM