I just saw a very inconvenient movie. Not An Inconvenient Truth, starring Al Gore, but a new documentary that aired last week on BBC 4 called The Great Global Warming Swindle.
The film is not inconvenient because it predicts environmental disaster, but because it forced me to think heretical thoughts. As Patrick Moore, a founder of Greenpeace, said in the film, questioning the global-warming orthodoxy has become tantamount to denying the Holocaust. So it is no fun for me to risk being labeled a “global-warming denier.” 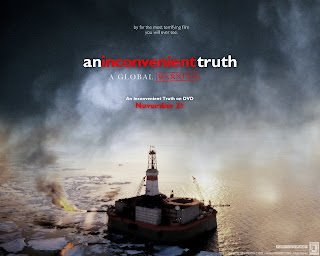 Actually, I’m not, since there is no dispute that global temperatures have risen roughly half a degree Celsius over the past century. Yet what I cannot deny is the strong likelihood that this warming was not primarily caused by greenhouse gases — let alone by carbon dioxide (CO2), let alone by man-made CO2.
Here are the facts as presented by the prominent scientists interviewed in the film:
* Climate change is natural. Global temperatures have been generally rising since the end of the Little Ice Age about 150 years ago, when the River Thames would regularly freeze over. Most of this rise preceded global industrial activity, which only kicked in about 1940. And from 1940 to 1975, global temperatures dropped slightly.
A thousand years ago, during the Medieval Warm Period, the climate was warmer than today, and vineyards grew even in northern England. And 8,000 years ago, during the Holocene Maximum, it was considerably warmer than today. Yet polar bears, which are supposedly threatened by current warming, survived through both of these periods.
The Greenland icecap, ice-core sampling shows, goes back at least 11,000 years, meaning it too existed even through these warmer periods.
* Rising CO2 is caused by rising temperatures, not the other way around. The dramatic graph that Gore displays in his movie, showing the correlation between CO2 and temperatures over hundreds of thousands of years based on ice core samples, is accurate. What Gore doesn’t say is that the same graph shows that peaks in CO2 lag behind the temperature peaks by hundreds of years.
The explanation: The main source and sink for CO2 is the oceans, which emit this gas as they warm, and absorb it as they cool. Oceans take centuries to change temperature, so atmospheric concentrations of CO2 also take time to catch up with temperature changes.
* Solar activity seems to be the main driver of climate change. The new film shows compelling graphs demonstrating the tight correlation between sun spots and cosmic rays — both measures of solar activity — and earth temperatures. CO2 is a side show compared to the sun.
* Greenhouse gases are a very minor part of the atmosphere, but of these, water vapor comprises 95 percent. The atmosphere contains only 0.054 percent CO2 from all sources, human and natural.
* The IPCC, the United Nations body of scientists examining climate change, has become politicized. Former National Academy of Sciences president Frederick Seitz has charged that inconvenient statements by scientists were simply deleted by the IPCC staff, such as: “None of the studies cited above has shown clear evidence that we can attribute the observed climate changes to the specific cause of greenhouse gases.”
* All the global-warming models predict that if the warming is caused by the greenhouse effect, it should be more pronounced at the top of the greenhouse, namely in the troposphere, about 10 km. above the equator, where the heat is being trapped. Instead, the evidence shows either no additional warming there, or even slower warming than on the surface.
* IPCC reports have claimed that “mosquito species that transmit malaria do not usually survive where the mean winter temperature drops below 16 to 18 degrees centigrade.” The Pasteur Institute’s Paul Reiter resigned from the IPCC over this lie, pointing out that mosquitoes are “extremely abundant” in the Arctic, and that a major malaria epidemic occurred in the 1920s Soviet Union, infecting 13 million and killing 60,000 people.
* As late as 1974, a BBC documentary, The Weather Machine, warned of the coming global ice age, since at that time the globe had indeed been cooling for the previous 35 years.
Ironically, one scientist in that film suggested that manmade CO2 emissions might reverse this and stave off disaster.
All this should lead thinking people to at least keep an open mind. But there is more. Global-warming activists have been urging poor countries not to use their coal and oil, but to turn to wind and solar energy instead. This effectively condemns the two billion people now living without electricity to their misery.
According to the World Health Organization, four million children under the age of five die each year from the smoke produced by the indoor fires used in homes without electricity. There is nothing wrong with people in rich countries volunteering to cut their carbon emissions, but demanding this of the extreme poor is inhuman.
Global warming has become a religion not only in the sense of intolerance toward dissent, but also as the animating moral crusade of our age. Here too, it is not harmless, if environmentalism is allowed to trump ethics. Our children should not be taught that the height and essence of being good is to be green.
I’m all for preserving the environment. I would even pay a premium for a hybrid car — not to stop global warming, but simply to cut down on unhealthy and unpleasant smog. But all this should be at the level of good hygiene, not religion. To do good, one must first do no harm. Global-warming extremism, by harming the poorest of the poor and by substituting for real moral causes, fails this test.
Saul Singer heads the Project on U.S.-Israel Relations at the Jerusalem Center for Public Affairs, and is editorials editor and columnist at The Jerusalem Post. He previously served as a foreign policy advisor to U.S. Senator Connie Mack and on the staffs of the House Foreign Affairs Committee and the Senate Banking Committee.
Posted by jtf at 9:51 AM