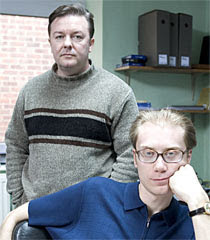 The writer-performers, who also created "The Office," will end "Extras" with a one-off special as they did with "The Office."

"We don't have a date or any details about the cast yet," a spokeswoman for Gervais told the BBC, adding that the idea was in its "very, very early" stages.

However, the pair "will, at some point, sit down together and write it," she said. 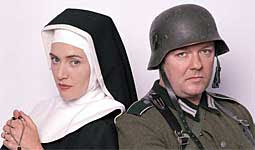 Kate Winslet and Ricky Gervais from an episode of "Extras" from the show's first season.

"Extras," which has featured guest appearances by Kate Winslet, David Bowie and Robert De Niro, to name a few, follows the exploits of comic actor Andy Millman and his haphazard agent, Darren Lamb. HBO airs it in the U.S.

Merchant won the comedy performance prize for his role as Lamb at the Royal Television Society's program awards last week.
Posted by jtf at 11:24 AM