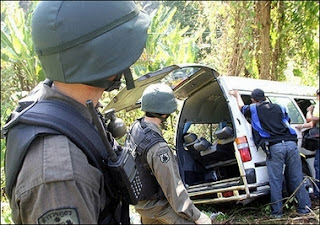 Thai policemen stand guard next to a minibus whose passengers were shot dead by militants in Yala province. Nine Buddhists were massacred when their bus was ambushed on Wednesday, while 11 Muslims were injured in a bomb attack at a mosque in Thailand's insurgency-torn south, capping a bloody day in the region.

Two weeks ago, gunmen stopped a small passenger van in the street. They forced all of its occupants out and on to the roadside. The gunmen then shot all nine of them dead. Three of the passengers were women, one was a young girl.

Just another day of Baghdad carnage, you say. But no, this was Thailand, traditionally a peaceful, prosperous and stable Southeast Asian state at the heart of the Association of Southeast Asian Nations, a formal treaty ally of the US and a close trade and diplomatic partner of Australia.

But the truth is that a savage, terrible and appallingly bloodthirsty insurgency is under way in southern Thailand. It is the third great insurgency in the world today, after Iraq and Afghanistan. More people are dying in horrific violence in southern Thailand than in Palestine or the southern Philippines, or in the ethnic strife in some of the outlying islands of Indonesia.

Neither the Thai Government nor the international media quite wants to admit the horrible truth at the heart of the increasingly surreal sadism and violence in southern Thailand. This is an Islamist insurgency. While it is organisationally independent of al-Qa'ida or Jemaah Islamiah, it fits into the global pattern of Islamist insurgency.

It is an insurgency restricted to the four Muslim provinces in southern Thailand. It is true that they are poor, but other provinces are poorer and have nothing like this savagery. It is true there is a good deal of criminal smuggling over the border to Malaysia, which goes beyond any Islamist ideology. But smuggling is even bigger across the Burmese and Cambodian borders and criminality there has not led to the gruesome acts of insurgency seen in southern Thailand.

The difference is the Islamist ideology of the shadowy insurgents. Increasingly the insurgents are killing women and children. The arc of violence has got consistently worse. The best estimates are that since January 2004, about 2100 people have died violently in the insurgency in southern Thailand.

Last September, Thailand's military ousted the elected prime minister, Thaksin Shinawatra, in a typically bloodless coup. The justification was the corruption of Thaksin's government and its heavy-handed and counterproductive efforts in the south.

The head of the Thai army, General Sonthi Boonyaratglin, is a Muslim and the new military Government said it would be more conciliatory in the south. It would follow a political strategy. It would enhance dialogue. It would offer concessions. But the result of all this is that killings have increased to their highest rate yet: up to four deaths a day. The violence has just got worse and worse.

I find it strange that this conflict has not received greater international media attention. Perhaps two dynamics are important.

The first is that the insurgents have no interest in a broad public relations strategy, and certainly no interest in the Western media. In this they are unlike most Islamist insurgencies. But in fact this reflects the strength of the insurgents. They are brutally effective on the ground and they are achieving their short-term objectives, so they have no need to seek a victory in the media.

And second, all Thai governments have tended to play down internal security problems, in part so as not to discourage tourism, which is so important to Thailand's economy. Thai tourism benefited from the Islamist violence elsewhere in Southeast Asia as Thailand's image, previously an accurate one, is of a Buddhist haven of peace and hospitality.

Thaksin's government and now the military-backed successor Government have shied away from the idea of confronting a full-blown Islamist insurgency in the south. As much as possible they want to see it as criminality on a big scale. But this doesn't square with the facts and is no longer a plausible story. Regional security analysts believe the failure of the Thai Government to grasp the nature and enormity of the task they face has led to insufficient resources going into the problem and the continuation of crippling inter-agency rivalries between the police and the military and the various security and intelligence agencies involved in the south.

There may be a terrible irony of Western, including Australian, policy at work here. Historically, the Thai military was good at two things: coups and counter-insurgency. Throughout the 1990s, however, Canberra and Washington urged the Thai military to reform itself into a conventional force designed to protect Thailand's territorial sovereignty rather than to interfere with politics or internal security, which was meant to be left to the police. But after last September's coup, the military appointed a notably clumsy and sub-par Government which has squabbled internally and taken several poor policy decisions that have frightened away foreign capital. Most analysts now believe the Thai economy is at least three to five years away from recovering its pre-coup robustness, even if the situation in the south is somehow resolved.

So the traditional ability of the military to mount a coup and then attract high-quality people to serve in the subsequent government - as when it attracted the outstanding Anand Panyarachun in the early 1990s to be an interim prime minister - is no longer evident.

Similarly, the Thai military had dealt in its history with several serious insurgencies - communist, Muslim and regional - as well as endless cross-border difficulties with Burma and Cambodia.

It had generally been highly effective in its own territory. Now its performance in the south could hardly be worse. It is spasmodically brutal and generally ineffective, with poor intelligence and little ability to provide protection to leading moderates or security to the population at large, the supreme bad combination in counter-insurgency.

Zacahry Abuza, the US-based terrorism analyst who has perhaps the most detailed knowledge of the Thai insurgency, identifies six trends in southern Thailand since last September's coup.

* While most people are still killed by guns, the number of deaths caused by bombs is rising, and the size, sophistication and lethality of the bombs is consistently increasing. In 2004, most bombs were under 2kg. In 2006, they were generally 4kg-5kg. Now they are frequently 15kg in size and detonated by an increasing variety of methods, from mobile phones to digital watches and timing devices.

* The insurgent attacks are becoming more savage and provocative. There has been an increase in beheadings. Women and children are frequently targeted. The insurgents have three times attacked royal entourages. A successful attack on any part of the Thai royal family would be an escalation in itself and a further humiliation for the Thai state.

* Schools and teachers, because they are agents of secularisation and assimilation of Muslims into the broader Thai society, are increasingly targets. The insurgents want to force Muslims out of government-run schools, or even government-supported Muslim schools, which teach a mixed curriculum. For many Muslims it is only safe now for their children to attend private Muslim schools.

* Abuza sees a rise in sectarian attacks and ethnic cleansing. Although most of the insurgents' victims have been Muslims - partly because of the insurgents' wide definition of collaborators - they have succeeded in pushing 15 per cent of the Buddhist population out of the affected provinces.

* There are more concerted attacks on economic targets, a trend Abuza identifies as beginning in 2005.

* There is increasing civil disobedience, often involving women and children. Despite the Thai forces' occasional episodes of brutality, people are more frightened of the insurgents than of the soldiers. The insurgents also undoubtedly have a degree of popular support, despite their savagery. Thus civilians, especially women and children, will demonstrate at police stations to demand the release of particular suspects.

Analysts believe the insurgents' short-term goals include making it impossible for the Thai state to function in the southern Muslim provinces; provoking heavy-handed responses from the security forces in order to increase alienation and mistrust between the people and the state; to begin imposing informal sharia law in the region; and to silence or co-opt any political alternatives within the Muslim community. The long-term goal is assumed to be an independent Muslim state under full sharia law.

There was a series of mysterious explosions in Bangkok on New Year's Eve. Most analysts don't think they were the work of the southern insurgents but represent some manifestation of intra-elite conflict. While the insurgents have so far made a strategic decision not to target Bangkok or Phuket, this could change at any time. This whole disastrous situation is the most urgent security challenge in Southeast Asia today.
Posted by jtf at 8:47 AM