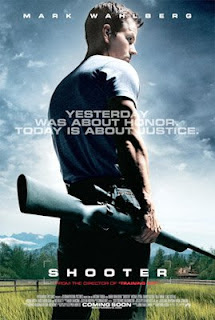 [I don't know how the movie will fare but Stephen Hunter's Bob Lee Swagger and Earl Swagger novels are a hell of a lot of fun to read. - jtf]

We live in a world in which conspiracy theories abound, so it comes as no surprise that many thrillers incorporate governmental backstabbing, double-dealing, and cover-ups into the fabric of their story. In a time when paranoia and distrust of the government have become second nature, a movie like Shooter strikes a responsive chord. The film takes the cynic's view of the U.S. political power structure and paints an identifiable portrait. The message is twofold: never trust anyone in power and paranoia is good because they are out to get you. It also helps that director Antoine Fuqua is able to sustain tension and keep us guessing through the course of this better-than-average thriller.

Shooter, based on Stephen Hunter's 1993 novel Point of Impact, is 24 expanded for the big screen. (The presence of two 24 alumni - Kate Mara and Rade Serbedzija - strengthens the sense of connection.) Because the TV show has twenty-four 45-minute episodes in which to weave its story, it can afford subplots and down time. Shooter has two hours and doesn't fritter away even one of its 120 minutes - it's a straight shot to the end target. Character identification comes as a result of the film being populated by recognizable types: the Wronged Man, the Romantic Interest, the Helpful Sidekick, and the Treacherous Conspirators. These individuals are familiar, so it takes less to flesh them out than it might if the characters were being built from scratch. This allows more effort to go into developing the plot and executing the action sequences, which are almost non-stop from the half-hour point. 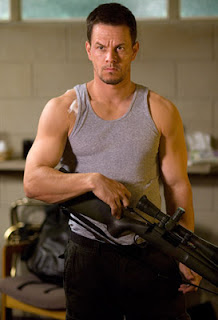 Bob Lee Swagger (Mark Wahlberg) is an ex-Special Ops sharpshooter who has been retired since finishing a tour of duty in Ethiopia. He's living in middle of nowhere when Colonel Isaac Johnson (Danny Glover) and his "guard dog," Jack Payne (Elias Koteas), arrive on his doorstep asking for help. According to their intel, someone is planning to assassinate the President in the next two weeks. They would like Swagger to do some recon and figure out how best to foil the attack. He agrees and soon finds himself in Philadelphia trying to save the President's life, then finding the tables turned when he is framed for the assassination attempt. With two bullets in him, he's on the run from thousands of law enforcement officials. He has only two allies: Sarah (Kate Mara), the girlfriend of his ex-Marine partner, and FBI agent Nick Memphis (Michael Pena), who has discovered evidence of a conspiracy.

Mark Wahlberg makes Swagger the kind of guy it's easy to root for. He's noble, he has been duped and betrayed, he's smart, and he's on the side of right. He's a mix of Jack Bauer and MacGyver, and Wahlberg understands how to present his resourcefulness and courage without making them seem cheesy. He portrays Swagger as a human not a superhuman. Michael Pena underplays the sidekick role, leaving the spotlight to Wahlberg. Kate Mara is cute, but doesn't have a lot to do. As the co-conspirators, Danny Glover, Elias Koteas, and Ned Beatty (as a corrupt Senator), ooze malice. We want these guys dead. Now. 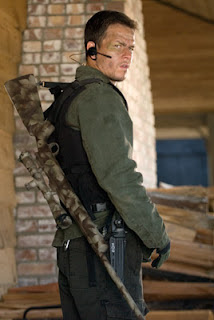 Shooter does what any good thriller should accomplish - it thrills. It's fast-paced, energetic, and doesn't follow a path that seems pre-ordained from the beginning. Director Antoine Fuqua recovers from the disastrous misfire of King Arthur to provide us with the kind of movie one might reasonably expect from the director of Training Day. Despite the modern trappings, there's something retro about the way the proceedings unfold. It's the good guys against the bad guys, with impossible odds and only one way out. These are the kinds of films Stallone and Schwarzenegger made while at the height of their popularity. What differentiates Shooter from its '80s precursors is that Wahlberg is a superior actor and the mood has shifted from Reagan-era jingoism to Bush-era cynicism. Swagger uses Rambo-like tactics, but at heart he's the anti-Rambo.

Shooter really isn't overtly political. (For example, we don't know whether the President is a Democrat or Republican, and it doesn't matter.) It gets in its jabs, but this is primarily the struggle of one man against the system, and that's a battle everyone can relate to. The movie taps into something visceral in each of us and keeps us wondering what Swagger will do next and how he will escape from each successive trap. Involvement is key to any thriller's success and Shooter delivers it. Even in a climate where the pervasive influence of 24 can be argued to have caused "thriller fatigue," Shooter is worth the price of admission.