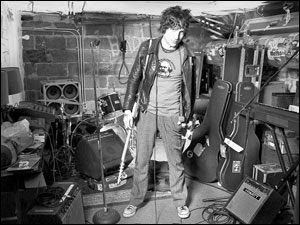 East Village icon Jesse Malin returns for some inspiration, and gives it right back

"New York is a great place to leave and come back to," says Jesse Malin, who recently returned to his hometown after a brief move to Los Angeles, where he recorded much of his third solo album, Glitter in the Gutter. "They've got some good-hearted people and decent Mexican food," he admits of his westward jaunt, "but I didn't last out there. I like to hang out, run into different people, just walk the streets—do that in L.A. and everyone thinks you're a male prostitute. But I need that contact, that spontaneity. It inspires me."

It's clear that Malin, presently holed up in a corner booth at Life Café on Avenue B, never wants for inspiration here. He's relaxing—as much as I imagine the fast-talking, constantly buzzing 39-year-old ever relaxes—with a cup of hot tea, chatting up with easy familiarity just about every customer coming or going. He politely apologizes for the repeated interruptions, much as he did when a similar scenario played out during our last meeting, at Dojo on St. Marks Place. And it explains why his apparent ubiquity around these parts has led some to jokingly refer to Malin as "the mayor of the East Village." I'd mention this, but I've heard he's not too fond of the tag.

And yet his prints are all over the area. Located a few blocks south and west of Life Café is a building that, back in the early '80s, housed the club A7, where Malin's teenage hardcore band Heart Attack would open for Bad Brains and SS Decontrol and blast through songs with titles like "Hitler" and "God Is Dead"; today, he leases the space for his neighborhood bar, Niagara. Between then and now, in sorta chronological order, Malin dropped out of high school, disbanded Heart Attack, worked odd jobs ranging from gas station attendant to health-food store clerk to all-purpose "man with a van" (the mention of which now inevitably leads to a comical tale about moving Barbra Streisand's bed), formed the East Village glam-punk act D Generation, recorded three undervalued major label albums, befriended childhood heroes Joey Ramone and Joe Strummer, opened the infamous St. Marks Place club Coney Island High, watched D Generation disintegrate and Coney be shut down, and, around the turn of the century, re-emerged on the local scene as a storytelling solo artist, mining a sound that pulled predominantly from his love of classic rock, Americana, and powerpop.

"There are some people who were like, 'What the fuck are you doing? You sound like Bruce-Seger-Cruisers-Jovi-whatever,' " says Malin. "But to me it's all just rock 'n' roll, and you take those three or four minutes you have in a song to say what you gotta say. When I was younger, it was all pretty angry and aggressive, but now I'm more secure; I'm capable of exposing more of myself without being so self-conscious about it. And I think I'm more comfortable doing this, and actually a little happier."

Happier, perhaps. Happy—not exactly. Malin writes songs that are built for dusk or dawn, weary with regret for dreams unfulfilled or rife with anxiety for those yet to be realized. His narratives are plainly stated yet unabashedly poignant, instilled with a true believer's sense of hope but seemingly preordained to end in despair. But in contrast to his two prior solo albums, Glitter in the Gutter—which features guitar contributions from Josh Homme and old friend Ryan Adams, as well as a vocal duet with Bruce Springsteen on the piano ballad "Broken Radio"—is, at least musically, a largely upbeat affair, its songs outfitted with ringing, widescreen guitars and coated in a sparkling production sheen. Furthermore, says Malin, the album, at its core, "is not a crying-in-your-beer record. It's more about hope." Case in point: For Glitter, Malin re-recorded his song "Since You're in Love," a tale of rejection and depression set in a 9/11-scarred New York that first appeared on 2004's The Heat. This time, he jacked up the tempo, added some new lyrics, and changed the name. The new title? "Happy Ever After." He still doesn't get the girl, but, he says, "I thought it was a nice sentiment, to be able to offer love anyway, instead of just saying, 'Fuck you.' "

Which, in a way, kinda sums up the album. "When I was writing these songs I kept asking myself, 'How do people experience everything life throws at them without becoming jaded and cynical?' " says Malin. "The truth is you just find a way to keep going, because you never know who you might meet tomorrow, or what might happen next."

Malin needs that contact, that spontaneity. It inspires him.

Jesse Malin plays the Bowery Ballroom March 19, boweryballroom.com
Posted by jtf at 7:08 AM