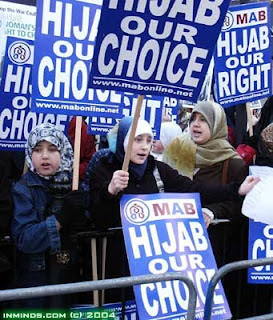 The European left makes common cause with the Muslim right.

"It is a profound truth," declared the British Socialist Party in a 1911 manifesto, "that Socialism is the natural enemy of religion." Not the least of the oddities in the subsequent history of progressive politics is that today it has become the principal vehicle in the West for Islamist goals and policies.

Caroline Lucas, a member of the Green Party faction in the European Parliament, is a longtime activist in anti-nuclear, animal-rights and environmentalist causes, and not someone likely to describe herself as an anti-feminist. Yet in June 2004, she joined British MPs Fiona Mactaggart of Labor and Sarah Teather of the Liberal Democrats for a press conference in the House of Commons organized by the Assembly for the Protection of Hijab. The Assembly, better known as Pro-Hijab, is a pan-European organization formed "to campaign nationally and internationally for the protection of every Muslim woman's right to wear the Hijab in accordance with her beliefs and for the protection of every woman's right to dress as modestly and as comfortably as she pleases."

Once upon a time, feminists and socialists alike would have translated that as "subservience to the patriarchy." Now they seem to have rediscovered their roots as civil libertarians, at least when it's politically expedient. Consider the issue of the Armenian genocide. In 1998, the French-speaking wing of Belgium's Socialist Party (PS) co-sponsored legislation to criminalize denial of the Ottoman Empire's murder of an estimated 1.5 million Armenians, much as Holocaust denial is also against the law.

Yet for the past several years, the same PS has been blocking the process of criminalization it helped initiate, presumably in the service of free speech. "Additional legal and historical research," says Belgian Deputy Prime Minister Laurette Onkelinx, remains to be done in ascertaining exactly what happened in Anatolia in 1915.

Progressives have also been remarkably mindful of civil liberties in matters of immigration. When the German state of Baden-Wüttemberg last year required applicants for citizenship to answer a series of questions regarding their personal views, the leader of the German Green Party, Renate Künast, denounced it as "immoral." "A country governed by law," she argued, "cannot ask questions about moral values." Among the questions: "Where do you stand on the statement that a wife should obey her husband and that he can hit her if she fails to do so?"


Curiously, however, Europe's progressives have been somewhat less tolerant on other issues concerning moral values and personal belief. Take "Islamophobia," which progressives often consider akin to racism and have, in some instances, sought to ban by legal means. In Britain last year, Tony Blair's government enacted the Racial and Religious Hatred Act, which criminalized "threatening" comments against religious persons or beliefs. Comedian Rowan Atkinson and author Salman Rushdie, among others, warned that the law undermined basic rights of speech. But for London Mayor Ken Livingstone it was not enough: He defined "Islamophobia" as "discrimination, intolerance or hostility towards Islam and Muslims," and regretted that criminal acts were not more broadly defined by the legislation. 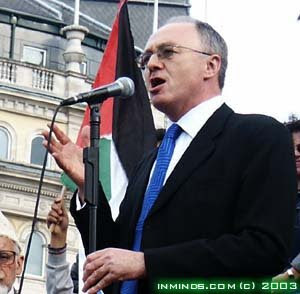 Ken Livingstom speaking at a rally for ending the occupation of Iraq and granting freedon to Palestine. [UK, London, Saturday 27th September 2003]

Since coming to office nearly seven years ago, Mr. Livingstone has become a symbol of the marriage of the European left and the Islamist right. It's a marriage of mutual convenience and, at least on one side, actual belief. In the Netherlands, a recent study by the University of Amsterdam's Institute for Migration and Ethnic Studies found that 80% of immigrants--the overwhelming majority of whom are Muslims--voted for the Labor party in recent elections, while the two main center-right parties received a combined 4% of the immigrant vote. In neighboring Belgium, the left-wing sociologist Jan Hertogen credits immigrants for "[saving] democracy" by voting as a bloc against the secessionist and anti-immigrant Vlaams Belang party.

For Muslim voters in Europe, the attractions of the Socialists are several. Socialists have traditionally taken a more accommodating approach to immigrants and asylum-seekers than their conservative rivals. They have championed the welfare state and the benefits it offers poor newcomers. They have promoted a multiculturalist ethos, which in practice has meant respecting Muslim traditions even when they conflict with Western values. In foreign policy, Socialists have often been anti-American and, by extension, hostile to Israel. That hostility has only increased as Muslim candidates have joined the Socialists' electoral slates and as the Muslim vote has become ever more crucial to the Socialists' electoral margin.

More mysterious, however, at least as a matter of ideology, has been the dalliance of the progressive left with the (Islamic) political right. Self-styled progressives, after all, have spent the past four decades championing the very freedoms that Islam most opposes: sexual and reproductive freedoms, gay rights, freedom from religion, pornography and various forms of artistic transgression, pacifism and so on. For those who hold this form of politics dear, any long-term alliance with Islamic politics ultimately becomes an ideological, if not a political, suicide pact. One cannot, after all, champion the cause of universal liberation in alliance with a movement that at its core stands for submission.


This is not, of course, the first time such a thing has happened in the history of the progressive movement, or in European history. On the contrary, it is the recurring theme. In the early 20th century, the apostles of Fabianism--George Bernard Shaw among them--looked to the Soviet Union for inspiration; in the 1960s the model was Mao; in the late 1970s, the great French philosopher Michel Foucault went to Iran to write a paean to Khomeini's revolution. In nearly every case, the progressives were, by later admission, deceived, but not before they had performed their service as "useful idiots" to a totalitarian cause.

But the stakes today are different. At question for Europeans is not the prevailing view of a distant country. The question is the shaping of their own. Europe's liberal democrats were able, sometimes with outside help, to preserve their values in the face of an outside threat. Whether they can resist the temptations of Islamosocialism remains to be seen.

Mr. Stephens is a member of The Wall Street Journal's editorial board. His column appears in the Journal Tuesdays.
Posted by jtf at 10:38 AM