Tony Dungy: A Man of Grace 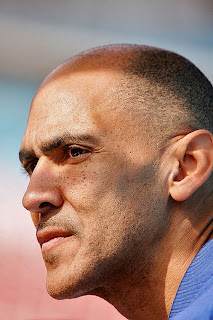 Amidst the excitement and the preparations the Colts had to make last week for the Super Bowl, coach Tony Dungy picked up the telephone to call Pittsburgh.

Dan Rooney excused himself from another phone conversation to take the call.

"Tony called to thank me,'' said Rooney, the Steelers chairman today and president of the team when Dungy played and coached in Pittsburgh.

"That's all he wanted to do. He said, 'You guys gave me a shot; I was a free agent, you bought me in. You brought me back as a coach and then I got to be a coordinator.'''

That's Dungy, never one to forget those who helped him out, at the same time graciously overlooking what could have been his most humbling professional moment in coaching. He stood up for himself, turned down a demotion with the Steelers 18 years ago and it became a positive step in his career.

The Steelers went 5-11 in 1988, their fourth consecutive season out of the playoffs. Management wanted Chuck Noll to make some changes on his staff. Noll at first refused, then relented. Assistants were fired and one was demoted. Dungy had been the youngest defensive coordinator in the NFL and the only black in that job when Noll promoted him at age 29 in 1984. Five years later, Noll reluctantly asked Dungy to take a demotion to secondary coach. Dungy resigned instead.

Noll always thought Dungy had all the qualities to be a great football coach, most of all intelligence and patience.

"Chuck was impressed with his knowledge of the game,'' said Bill Nunn, the Steelers' legendary scout who became close with Dungy during their time in Pittsburgh.

The Philadelphia Eagles even interviewed Dungy for their head coaching job in 1986 before they hired Buddy Ryan.

Others, though, thought he was too nice of a man, that he needed to be tougher, that others on his defensive staff in Pittsburgh went over his head to Noll.

"He was soft-spoken, never screamed, never hollered at people,'' Nunn said. "I always thought that might have been a handicap to him."

It was, for that one moment in time with the Steelers, but Dungy rose above it and, maintaining that same low-key style, rose back through the coaching ranks elsewhere.

Kansas City hired him in 1989 as its secondary coach where he worked under coordinator Bill Cowher. He became the Vikings defensive coordinator in 1992 and Tampa Bay's head coach in 1996. There, he led the Bucs to the kind of success they had not previously experienced -- four playoff appearances in six seasons and a 54-42 record. In the 10 years before Dungy, the Bucs went 43-111.

But he was fired because Tampa Bay never reached the Super Bowl. He took over as Colts coach in 2002. Indy has been in the playoffs all five years under Dungy (60-20), but the same lack of success in the playoffs haunted him -- until now.

"I was really happy to see him get into the Super Bowl,'' said Nunn, 81. "It's a dog-gone shame, but there's always that group, that as long as a black guy's coaching, unless he gets to that point, there's always something wrong with him.

"I'm delighted, because really, what happened to him down in Tampa, I saw no reason for them getting rid of him down there. They went on and won [a Super Bowl] with his team.

"Like quarterbacks when they say he can't win the big one, so on and so forth -- I'm just happy to see him get in. He's the type of guy who really deserves it.''

Dungy has not uttered a discouraging word about his firing in Tampa Bay or his demotion in Pittsburgh all week. Indeed, he's referred to his playing and coaching days in Pittsburgh fondly.

Noll and Dungy are not alike in coaching style, but Dungy often quotes Noll in many situations and uses what he learned under Noll in application, on and off the field.

Someone asked Dungy how his defense went from being the worst in the league against the run, allowing 173 yards a game, to 73.3 in three playoff games.

"I've always said, something I got from Coach Noll: When you struggle, do less,'' Dungy said.

Noll affected him in other ways as well.

"I was fortunate enough to work for Coach Noll, whose family was very important to him,'' Dungy said. "I saw that you could win and win Super Bowls and still place your family at a high priority ...

"Looking back on it, I can see how the Lord was really preparing me to be a coach. I went into Pittsburgh with coach Noll, they were in the middle of a championship run. I saw very quickly what a championship team looks like -- the things that you did, how coach Noll spreads fundamentals and just being the same day in and day out."

Dungy talked long and often about Noll here. Unfortunately, Noll was unable to talk about Dungy. Noll, who retired after the 1991 season, lives on the west coast of Florida with his wife Marianne. He has severe back problems that likely go back to his playing days with the Cleveland Browns, and through his wife has declined all interviews this week. Marianne Noll did say the two of them get great satisfaction from knowing Dungy's team is in the Super Bowl. Dungy was among Noll's favorites, even when he played safety for him in 1977 and 1978.

"Playing for coach Noll," Dungy said, "you can be very, very good at what you do and lead a somewhat normal life away from football and that was very important to my professional growth."

A good quarterback at the University of Minnesota, the Steelers first tried him at wide receiver but then sent him to safety. As a rookie, he famously intercepted a pass and threw an interception in the same game -- at Houston, when injuries pressed him into service as the emergency quarterback.

"One thing about him, he was a good athlete,'' Nunn said. "He goes over to the defensive side and Bud Carson ends up falling in love with him. He picked it up so fast -- in a week he was telling guys like Mel [Blount] and others how to line up and do certain things.

"Bud loved intelligence, and Tony proved himself as far as being intelligent. He really learned a whole lot from Bud Carson when he was with him."

Nunn, 81, has been around sports all his life, first as a college basketball player and later as sports editor of the Pittsburgh Courier before joining the Steelers fulltime in 1968. He compares Dungy's even temperament as a coach to only two others, both on the basketball court -- Lenny Wilkens and John McClendon.

"His maturity at a young age and his being soft-spoken -- he never screamed, never hollered at people,'' Nunn cited as examples.

"I've never known him to knock anybody. That's one of the things that makes him so unique. I think he's a special guy."

Nunn would not be surprised if Dungy does not retire after Sunday's game and never coach again. Back when Dungy was the youngest NFL coordinator at age 29, he often told Nunn he would retire by the time he turned 50. Nunn called him after his 50th birthday in October 2005.

"He said, 'What do you want?'" Nunn recalled with a laugh. "I said, 'I left the ballclub and I've gone back to the Courier and I'm writing again. I just want to get this story about your retirement.'

Tony Dungy rarely hollered or spit, and he never cussed, but even during those early days in Pittsburgh, no one forgot him.

(Ed Bouchette can be reached at ebouchette@post-gazette.com. )
Posted by jtf at 5:02 PM