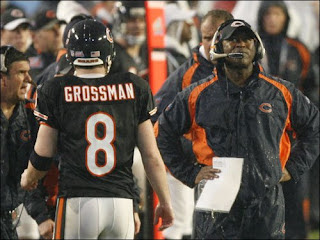 Bears quarterback Rex Grossman walked back to the bench after throwing an interception, as coach Lovie Smith watched the play on the large screen, in the fourth quarter.

MIAMI -- So, who's ignorant now? Rex Grossman called out the analysts who wondered why he throws hideous interceptions and fumbles simple snaps, then responded in his defining game by throwing hideous interceptions and fumbling simple snaps. When challenged to win a sterling silver trophy in the fourth quarter, Bad Rex played like he didn't belong. And if that's harsh, let me remind him it was the Super Bowl and that he may never return again.

While I might be ''ignorant'' about some things, I know you can't win a championship without a quarterback. That is especially true when Peyton Manning is cutting that meat, audibilizing and waving like a madman, confusing Brian Urlacher and punishing the defense with big downfield passes and handoffs and flips to robust Indianapolis running backs who softened the brawny, big-city defenders. In the end, the difference between experiencing a confetti tornado and becoming one of those quickly forgotten runners-up was that the Bears tried to convince us they had a real quarterback when smart people knew they did not.

''We had a chance to win the game, and we just didn't have it,'' Grossman said. ''I'd like to have the two interceptions back. I don't have any excuses.''

Good. Because he would have misfired on those, too.

We will remember these Bears for a nice season, but also for not backing up their smack in the roman-numeraled cojones test. Long live the 1985 legends. We sensed all season that this team was vulnerable and living a little too large, and its holes were exposed in a 29-17 loss to the smarter, more physical and better-coached Colts. Shut up already, huh? Grossman and Urlacher made brash boasts that seemed unnecessary and turned out embarrassing. It's beyond me why Urlacher took on the '85 Bears, basically saying he was sick of their grip on Chicago culture and wanted ''our own identity.''

Seems an apology is in order. This team was another heartbreaker, full of hiss and vinegar but ultimately full of you know what. As Manning the football scholar strategized and, I'm sure, sometimes teased the Bears with his barking at the line, Urlacher looked panicked, responding with his own pointing and gesticulating but rarely getting results. Manning ran a clinic, and the Bears lacked consistent answers. Maybe they would have had more with Tommie Harris and Mike Brown, but the evening seemed preordained for Colts coach Tony Dungy, a fine man who has endured hell and deserves a championship after so many years of falling short.

Afterward, Urlacher and Grossman sat side by side in a damp concrete room. After walking slowly from the locker room with his head slumped, Urlacher answered questions softly at the podium and revealed watery eyes, looking devastated. Grossman tried to keep a stiff upper lip, but as CBS' Jim Nantz said on the telecast, he is going to take loads of national criticism now.
The last interception? ''It got away from me. It was about 10 yards to the right and maybe needed about 10 more yards,'' he said. ''It was a poor throw.''

The killer fumbled snap? ''It was a good snap. My hands were right there,'' he said. ''It kind of slid right out of there.''

Did the rain affect him? ''It was the same for both quarterbacks,'' he said. ''You won't hear me make excuses and say things like I'm a guy in his first full season. We're going to have a great team next year. If people don't see that, it doesn't matter.''

There he goes again, challenging ''people.'' When asked about his ''ignorant'' comment, he said he ''was just being honest'' and muttered something about not remembering it.

Most frustrating about a feeble offensive performance -- five turnovers, 11 first downs, 10 points after Devin Hester's smashing touchdown return of the opening kickoff -- was that the Bears were starting with great field position. Because the Colts feared kicking to Hester, they squibbed to upbacks. But one, two, three and out -- the Bears couldn't capitalize. The master plan was to run all night on the Colts, but except for an early 52-yard burst by Thomas Jones, the idea went awry, partially because Cedric Benson left with a knee problem. They needed the QB to win them a Super Bowl. He did not. Manning did, elevating himself to legendhood and retiring the gorilla forevermore.

''The quarterback has a lot of influence on a football game,'' said Muhsin Muhammad, who caught an early TD flip from Grossman but had only two more catches. ''His decision-making, his ballhandling -- all those things factored in the game.''

The talk coming in was about money: Lovie Smith deserving a fat contract extension, Ron Rivera needing bigger pay to keep him away from the Cowboys, even Grossman angling for a lucrative new deal. Smith will get his, but Halas Hall would be nuts to reward Rex and not open the competition to Brian Griese in July. When the fourth quarter called for efficient, dynamic leadership, the gunslinger just winged the ball foolishly. Earlier, with the game up for grabs in the driving rain, he suffered successive 11-yard losses, tripping over his feet on one play and fumbling the next snap.

To be fair, Grossman is a young player who never should have been in this position and had no chance in this mismatch. Also, the Bears went 56 actual minutes between offensive snaps, having to wait out the marksmanship of Manning and the halftime screams of Prince. And so much for the theory rain would favor the Chicago team and hurt the dome team.

The Bears had their butts kicked and their brains picked.

Which means -- gulp -- that Denny Green was right. We will not crown their asses.

And to think it started so magnificently. Hester walked calmly to the end zone before the opening kickoff, waving his hands to fans and pointing to the Bears logo on the ground. His turf, his team, his city, his Super Bowl? Adam Vinatieri kicked the ball near the left sideline, but it didn't deter Devin From Heaven. He cut back to the middle, instinctively flowed through a hole, blew past a diving Vinatieri and didn't allow a Colt to touch him until he was tackled around the ankles in the other end zone. As the stadium rumbled with Bearphoria, a replay showed Hester looking at himself on the Jumbotron as he covered the final 20 yards.
Alas, he had little help from his team.

The good news: A talented nucleus remains in place.

The bad news: Rex is an enigma. You hope he'll spend the offseason studying Peyton Manning tapes and not moping about critics who, it seems, weren't so ignorant after all.


Jay Mariotti is a regular on ''Around the Horn'' at 4 p.m. on ESPN. Send e-mail to inbox@suntimes.com with name, hometown and daytime phone number (letters run Sunday).
Posted by jtf at 10:05 AM