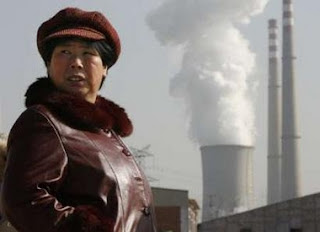 A woman walks near a power plant's cooling tower and smoke stacks on the outskirts of Beijing February 1, 2007.

There are no solutions in the realm of the politically possible.

Public policy is all about trade-offs. Economists understand this better than politicians because voters want to have their cake and eat it too, and politicians think whatever is popular must also be true.

Economists understand that if we put a chicken in every pot, it might cost us an aircraft carrier or a hospital. We can build a hospital, but it might come at the expense of a little patch of forest. We can protect a wetland, but that will make a new school more expensive.

Earth got about 0.7 degrees Celsius warmer in the 20th century while it increased its GDP by 1,800 percent, by one estimate. How much of that 0.7 degrees can be laid at the feet of that 1,800 percent is unknowable, but let’s stipulate that all of the warming was the result of our prosperity and that this warming is in fact indisputably bad (which is hardly obvious).

That’s still an amazing bargain. Life expectancies in the United States increased from about 47 years to about 77 years. Literacy, medicine, leisure and even, in many respects, the environment have improved mightily over the course of the 20th century, at least in the prosperous West.

Given the option of getting another 1,800 percent richer in exchange for another 0.7 degrees warmer, I’d take the heat in a heartbeat. Of course, warming might get more expensive for us (and we might get a lot richer than 1,800 percent too). There are tipping points in every sphere of life, and what cost us little in the 20th century could cost us enormously in the 21st — at least that’s what we’re told.

And boy, are we told. We’re (deceitfully) told polar bears are the canaries in the global coal mine. Al Gore even hosts an apocalyptic infomercial on the subject, complete with fancy renderings of New York City underwater.

Skeptics are heckled for calling attention to global warming scare tactics. But the simple fact is that activists need to hype the threat, and not just because that’s what the media demand of them. Their proposed remedies cost so much money — bidding starts at 1 percent of global GDP a year and rises quickly — they have to ratchet up the fear factor just to get the conversation started.

The costs are just too high for too little payoff. Even if the Kyoto Protocol were put into effect tomorrow — a total impossibility — we’d barely affect global warming. Jerry Mahlman of the National Center for Atmospheric Research speculated in Science magazine that “it might take another 30 Kyotos over the next century” to beat back global warming.

Thirty Kyotos! That’s going to be tough considering that China alone plans on building an additional 2,200 coal plants by 2030. Oh, but because China (like India) is exempt from Kyoto as a developing country, the West will just have to reduce its own emissions even more.

A more persuasive cost-benefit analysis hinges not on prophecies of environmental doom but on geopolitics. We buy too much oil from places we shouldn’t, which makes us dependent on nasty regimes and makes those regimes nastier.

Here again, the benefits barely outweigh the costs. Ethanol requires almost as much energy to make as it provides, and the costs to the environment and the economy may be staggering.

Frankly, I don’t think the trade-off is worth it — yet. The history of capitalism and technology tells us that what starts out expensive and arduous becomes cheap and easy over time.

Lewis and Clark took months to do what a truck carrying Tickle-Me Elmos does every week. Technology 10 years from now could solve global warming at a fraction of today’s costs. What technologies? I don’t know. Maybe fusion. Maybe hydrogen. Maybe we’ll harness the perpetual motion of Sen. Joe Biden’s mouth.

The fact is we can’t afford to fix global warming right now, in part because poor countries want to get rich, too. And rich countries, where the global warming debate is settled, are finding even the first of 30 Kyotos too fiscally onerous. There are no solutions in the realm of the politically possible. So why throw trillions of dollars into “remedies” that even their proponents concede won’t solve the problem?