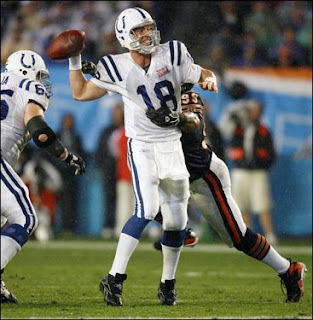 MIAMI GARDENS, Fla. -- Persistent inquisitors wanted Peyton Manning to tell them what they wanted to hear.

Manning would not cooperate. No, he kept saying, this had nothing to do with getting any animal off his back, be it a monkey or a parakeet.

"I have never played that card," he said. "I don't even know what that means. I'm just proud to be on this team."

They named him the Most Valuable Player of Super Bowl XLI, but was he? Did it make much sense to single out one Indianapolis player as being that much worthier than any other on a night when the defense absolutely embarrassed the Chicago offense and when Dominic Rhodes came off the bench to run for 113 yards?

No, it didn't. But the way it works is that somebody must be named the MVP and be given the keys to a limited edition, fiery red Cadillac XLR (as if America's Pitchman couldn't afford his own), and with his rock-solid performance in the rain, Manning was deemed that man.

So what can any critic say now? Peyton Manning will get his ring. He will not be his generation's Dan Marino, a passing machine fated never to have won the biggest of all football games, not that you really want to go there. "Dan Marino was a great quarterback," Manning hissed. "Any quarterback compared to Dan Marino should be honored."

Manning was not awesomely great last night (25 for 38, 247 yards, one TD and one INT), but he hasn't needed to be awesomely great throughout the 2007 postseason. Given the sorry regular-season state of the Colts' defense, the assumption coming into the playoffs was that Manning would have to put up box car numbers if the Colts were to have a chance of winning it all. But that's not the way it worked out.

For reasons no one can currently explain, the Indianapolis defense awoke, starting with the opening game against Kansas City. It was an aggressive, swarming, punishing defense and it peaked last night by holding the NFC champion Bears to seven first downs in the first three periods and one offensive touchdown in the game.

Manning was great in the second half against the Patriots, throwing for an outstanding 358 yards while directing his team to five scores, but last night he was only asked to be efficient. His one hiccup was a double-coverage Chris Harris interception on a first-quarter pass intended for Marvin Harrison. After that he was as good as a man could be in the relentless rain, taking precisely what the timid Chicago defense was giving him while making them pay a terrible price for a breakdown in coverage in the form of a first-quarter 53-yard touchdown pass to Reggie Wayne.

"That was a play we just put in this week," Manning explained. "It was an end bump route and I think they botched the coverage."

What Manning didn't say was that it was a pass not every quarterback could make. He was moving to his right under rare heavy pressure -- once again his line kept his white uniform very close to spotless with just one late sack -- and he was in a rusher's clutches when he unloaded a pass that had a sufficient amount of mustard. "I had to buy a little time," he said. "The guy had a hand on me."

His longest completion the rest of the game was 22 yards. He took the short- and medium-range passes the Bears were conceding, and he didn't get greedy. Most of all, he simply took good care of the ball -- not that he would accept the credit.

"The weather wasn't what you'd expect," he said. "You don't come down here thinking about playing in the rain. That's why it's great to have a center like Jeff Saturday with you. We've taken so many snaps together. [The Bears] had a little problem with that. They did not have that advantage."

He did not have to air it out because he had the two things every quarterback would want to back him up in a game of this magnitude. He had a running game (Rhodes and Joseph Addai combined for 190 yards) and he had a defense. Manning knew what to do with both.

Finally having a defense made him a different quarterback during these playoffs. "Certainly it does change your frame of mind because you feel like maybe you don't have to be quite as aggressive," he said. "Third down, punt to back them up in field position, is not the worst thing in the world."

He took great pains to avoid using the word "I," constantly saying how proud he was to be a part of this team and to be coached by Tony Dungy. "He's stood there the last couple of years and told us to keep our heads high and that our time would come," Manning said. "He said we'd be better off for our experience, but it's sometimes hard to believe it. And it was doubly hard the last two years because the team that beat us went on to win the Super Bowl. That was a tough pill to swallow."

He's good enough at basic math to know that now that he has one championship he's still two behind that guy in New England. "This is not the end," he said. "We want to be a better team next year."

And speaking of the Patriots, guess who left him a go-get-'em voice mail Friday? Why, none other than Bill Belichick, and don't think Manning didn't appreciate that. If he was ever bothered by that postgame snub two weeks ago, he's sure over it now.

At age 30, with a lot of tread left on the tires, Peyton Manning finally has it all. He has the passing records, he has the MVPs, and he now has his ring. He can always give the XLR to Eli.

Bob Ryan is a Globe columnist. His e-mail address is ryan@globe.com.
Posted by jtf at 8:33 AM