Peter Suderman: A Mine is a Terrible Thing to Waste 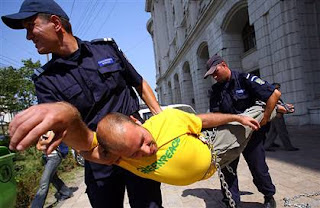 Riot police carry a Greenpeace activist away from the Romanian Environment Ministry in Bucharest in 2006. The activists were protesting a planned gold mine in the Transylvanian town of Rosia Montana, which has been the subject of documentaries by both environmentalists and corporations.

Mine Your Own Business exposes green hypocrisy.

It’s not often you find environmentalists staging a protest outside of National Geographic. But in mid-January, a handful of them gathered outside the magazine’s Washington, D.C. headquarters to rally against the organization’s decision to rent out a theater for the Washington premiere of the documentary Mine Your Own Business, a movie that tracks the efforts of environmentalists to stop the development of mines that promise to invigorate flagging economies in destitute regions across the world.

With stacks of photocopied handouts and hand-scrawled poster board signs bearing slogans like “Full Disclosure,” the motley crew of activists stalked the streets pushing papers at passers by and engaging in heated debate with free-market counter-protesters and even the filmmakers themselves. Nor were they the only ones going after the film. Earlier, Greenpeace released a statement urging National Geographic not go forth with the showing and comparing the movie to pornography and Nazi propaganda. This was despite the fact that National Geographic was not endorsing the showing, but merely renting out their theater space.

The rhetorical overkill of the response was telling: The environmental movement is clearly afraid of this film, and it should be. Mine Your Own Business, Irish filmmaker Phelim McAleer’s clear-eyed look at the true impacts of mining and the nefarious tactics of its opponents, exposes the self-satisfied delusions of the environmental Left, putting lie to a host of deadly, anti-growth canards and revealing the smug elitism of many green advocates.

This is, perhaps, not all that surprising. The ideas espoused by many greens are farcical enough to begin with. But even for someone used to their whoppers, it’s almost shocking the lies, misrepresentations, and condescending behavior that McAleeny manages to catch on film. With great care and thoroughness, the movie deconstructs the Left’s anti-growth narrative of pastoral tranquility and replaces it with something truly shocking: actual local sentiment.

Mine Your Own Business looks primarily at ongoing efforts to stop Canadian company Gabriel Resources from building a gold mine in Rosia Montana, Romania. The region is poor, with many people still residing in tiny, Communist-era block apartments and forced to use outhouses in a place in which freezing temperatures are common. Most anti-mine activists, of course, live far away, surrounded by modern comforts. But despite this, they claim to know what the locals want.

McAleer, on the other hand, figured the locals might be in a better position to explain their needs. In the film, he walks the streets of Rosia Montana and two other potential mine locations conducting interviews with area residents. Every one of them repeats a variant on one idea: What they really want is to work, and the mines would provide them that opportunity. By talking directly to locals, and by airing their ideas rather than claiming to speak for them, McAleer beats supposedly pro-local environmentalists at their own game.

Environmentalists, of course, talk endlessly about preserving traditional ways of life, but locals don’t want to preserve poverty and hardship. They want a chance to provide a more comfortable existence for themselves and their families. McAleer catches Francoise Heidebroek, who works with an anti-mining NGO, claiming that Rosia Montana residents would “prefer to ride a horse than drive a car.” When McAleer asks locals if they’d prefer to clop about in freezing temperatures on a horse, they just laugh at him. Heidebroek, it's useful to note, sequesters herself away in the modernized capitol city of Bucharest. If she wants to saddle up every morning, well, I say good luck. But there’s no reason that her equestrian whimsy should force actual Rosia Montana residents to do the same.

But Heidobroek’s wistful fantasies about poverty are nothing compared to those of the World Wildlife Fund’s Mark Fenn. Fenn opposes a proposed mine in Fort Dauphin, Madagascar on the grounds that it would destroy “the quaintness, the small-town feeling” that he so admires.

Of course, while Fenn, who boasts on camera of his $35,000 boat and the foundation of his new beachfront home, luxuriates in first world comfort, most of the town’s residents live in dire poverty. When asked why locals should be denied the economic opportunity that would come with the mine, he calmly explains that, although they might not have terribly good healthcare, or shelter, or nutrition, they have a stress-free life that can be valued by — I kid you not — the number of times they smile per day. Even if they did get money, he explains, they wouldn’t know how to spend it. As he tells it, they tend to blow their cash on parties, booze, and stereo systems. Not everyone, it appears, can have his taste in beach houses and catamarans.

McAleer, on the other hand, treats the locals in the areas he visits with respect. He asks one Fort Dauphin resident what she’d do with the money she’d get for a job, and she says she’d buy an item at a low price and sell it for a higher price — a line that drew much applause from the audience at the premiere.

Before venturing into the world of documentary film, McAleer worked as a journalist for the Financial Times and the U.K. Sunday Times. The experience shows. Mine Your Own Business works in no small part because of its smart, thoughtful storytelling, its expertly edited juxtapositions of activist claims and local realities, and its strong characterizations. Nor is it burdened by any of the lazy boosterism that infects so much documentary filmmaking. Instead, it’s a compellingly rendered journalistic narrative that casts a skeptical eye on many of the dubious claims of the environmental Left.

McAleer, of course, has his biases. The film begins by explaining that much of its funding came from Gabriel Resources, the company that wants to put in the mine. But McAleer also makes clear that he took the money on the condition that the company would have no editorial control. In a question and answer session after the film, he claimed to come from a liberal background and said that, on his first trip to Rosia Montana, he had intended to tell a typical story about big bad corporations. The facts of the story, however, were too obvious to ignore.

Before the film began, Thor Halvorssen, founder of the Moving Picture Institute, an organization devoted to aiding in the creation of films that promote a free society (and one of the groups responsible for the film’s production), introduced it by noting the protesters outside and the virulent reaction from Greenpeace. “To people who are intolerantly devoted to their own views,” he said, “this is pornography — political pornography.” The comparison is strong, but apt. As Mine Your Own Business makes clear, the left’s environmentalist fringe sees nothing as more revolting than the truth.

Full disclosure: The Washington, D.C. premiere I attended was partially sponsored by the Competitive Enterprise Institute (CEI) which, at the time of showing, was my employer. Neither I nor CEI had any input or involvement whatsoever into the film’s production.

— Peter Suderman is managing editor of NRO.
Posted by jtf at 12:20 PM