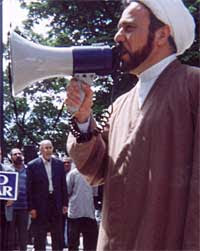 Many people in today’s Democratic party have contempt for religion, but they still have time for prayer. Last Friday, during the Democratic National Committee’s Annual Winter Meeting in Washington, Husham Al-Husainy, Imam of the Karbalaa Islamic Education Center, a Shi’ite mosque in Dearborn, Michigan, offered an invocation. As the assembled Democrats bowed their heads, Al-Husainy prayed:

In the name of God the most merciful, the most compassionate. We thank you, God, to bless us among your creations. We thank you, God, to make us as a great nation. We thank you God, to send us your messages through our father Abraham and Moses and Jesus and Mohammed. Through you, God, we unite. So guide us to the right path. The path of the people you bless, not the path of the people you doom. Help us, God, to liberate and fill this earth with justice and peace and love and equality. And help us to stop the war and violence, and oppression and occupation. Ameen.


A touching moment of ecumenical generosity and hope for peace? Not quite. In mentioning “Abraham and Moses and Jesus and Mohammed,” Al-Husainy no doubt sounded as if he was expansive, broad-minded, and not narrowly sectarian to the assembled Democrats. But in fact, he was almost certainly invoking them in their capacity as Muslim prophets: it is mainstream Islam that all of these were prophets who taught Islam, and that the followers of Moses and Jesus corrupted their teachings to create Judaism and Christianity. The Qur’an says that Abraham was not a Jew or a Christian, but a Muslim (3:67), and depicts Jesus denying his own divinity (5:116) -- and this, of course, is the Imam’s frame of reference. So what seems to be a gesture of ecumenical generosity actually amounts to a declaration of religious supremacism and the delegitimization of other religions.

What’s more, if a Christian priest or minister had prayed at a DNC meeting that those attending be guided away from the path of those doomed by God, the outcry would have been swift and shrill. Those whom God dooms? Hardly a concept that fits comfortably into today’s culture of non-accountability, but evidently it was acceptable to the Democrats when coming from a Muslim, although many of them would almost certainly been among the first to condemn the same sentiment coming from a Christian.

In this, in any case, the Imam was echoing the Fatiha, the first sura of the Qur’an and most common prayer of Islam. It asks Allah: “Show us the straight path, the path of those whom Thou hast favoured; not the (path) of those who earn Thine anger nor of those who go astray.” The traditional Islamic understanding of this is that the “straight path” is Islam -- cf. Islamic apologist John Esposito’s book Islam: The Straight Path. The path of those who have earned Allah’s anger are the Jews, and those who have gone astray are the Christians. The classic Qur’anic commentator Ibn Kathir explains that “the two paths He described here are both misguided,” and that those “two paths are the paths of the Christians and Jews, a fact that the believer should beware of so that he avoids them. The path of the believers is knowledge of the truth and abiding by it. In comparison, the Jews abandoned practicing the religion, while the Christians lost the true knowledge. This is why ‘anger’ descended upon the Jews, while being described as ‘led astray’ is more appropriate of the Christians.”

Ibn Kathir’s understanding of this passage is not a lone “extremist” interpretation. In fact, most Muslim commentators believe that the Jews are those who have earned Allah’s wrath and the Christians are those who have gone astray. This is the view of Tabari, Zamakhshari, the Tafsir al-Jalalayn, the Tanwir al-Miqbas min Tafsir Ibn Abbas, and Ibn Arabi, as well as Ibn Kathir. One contrasting, but not majority view, is that of Nisaburi, who says that “those who have incurred Allah’s wrath are the people of negligence, and those who have gone astray are the people of immoderation.”

Wahhabis drew criticism a few years back for adding “such as the Jews” and “such as the Christians” into parenthetical glosses on this passage in Qur’ans printed in Saudi Arabia. Some Western commentators imagined that the Saudis originated this interpretation, when in fact it is venerable and mainstream in Islamic theology.

It was also noteworthy that the Democrats continued standing with heads bowed piously while Al-Husainy prayed for an end to “war and violence, and oppression and occupation.” Occupation? In Iraq and Israel, no doubt. After all, according to Debbie Schlussel, during the Israeli incursion into Lebanon last summer Al-Husainy led “almost-daily protests of thousands of Hezbollah supporters on the streets of Dearborn and Detroit, swarming with swastikas and anti-Semitic, anti-American signs.” He also “delivered hate-filled, anti-American rhetoric” at “an anti-Semitic rally of 3,000 Hezbollah supporters at Dearborn’s Bint Jebail Cultural Center.” In August 2004, “he led anti-Bush, anti-American rallies on the streets of Dearborn,” and at other times “he led a number of pro-HAMAS and pro-Arafat rallies in the area.” At a rally honoring Arafat, “he and his followers held signs featuring enlarged photos of Khomeini.” He also has a taste for conspiracy theories: in an interview, Al-Husainy said of Saddam Hussein that “I believe he is an agent of America,” and attributed events in Iraq to the “Zionists”: “We also think some outsiders, with some Iraqis, and, by the way, I don’t want to exclude the Zionists. I think some extremists from the Mossad came in and took a chance to have some revenge, because we don’t know who killed [Imam Mohammed Bakr] Al-Hakim or Sergio Vieira De Mello, the UN High Commissioner for Human Rights.”

Of course, many of these ideas are mainstream among Democrats nowadays, so it is perhaps not surprising that Al-Husainy would have been welcome at the DNC meeting. The peculiar episode of his invocation is emblematic of the larger alliance between the Left and the global jihad – an alliance that may make the DNC’s conversion to Islam unnecessary, as the anti-Semitism and anti-Americanism of the jihadists is already abundantly in evidence among them. Perhaps this is a marriage of convenience for the Left, but, as the jihad continues to advance, it is one they will almost certainly someday come to regret.