George Will: Coaching Players For Life 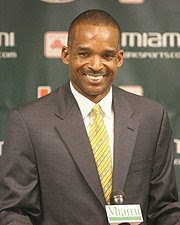 MIAMI -- Occasionally -- very occasionally -- a football person says something that punctures the fog of George Patton-style rhetoric that football people emit. Before a Super Bowl in the 1970s (the MCMLXXs, for those of you in a Super Bowl frame of mind), Dallas Cowboys running back Duane Thomas asked a subversive question about the game: "If it's the ultimate, how come they're playing it again next year?"

But most football people, and especially football coaches, are of the "Football Is Not a Matter of Life and Death -- It's More Important Than That" school of thought. However, when Randy Shannon, recently named head coach of the University of Miami Hurricanes, says that football can be a matter of life and death, that is not hyperbole, it is autobiography.

Shannon, 40, grew up in Miami's Liberty City, which is what sociologists and other refined thinkers call a challenging urban environment. Shannon was 3 when his father was murdered by one of his friends. "They had an argument," Shannon says matter-of-factly. Two of Shannon's brothers and a sister died, from cocaine and AIDS. By age 16, Shannon was a father. He could easily have been on a path to a prison or a cemetery. Instead, because of football, he went to the University of Miami and became the first member of his family to earn a college degree.

After a brief NFL career with the Cowboys, he went into coaching, and now he is hopscotching around the country recruiting high school seniors, many of whom think college football is a certain path to the NFL. "That," says Shannon, "is the mentality that has to change." Fewer than 2 percent of even Division I college football players will have NFL careers, and most of those who do will be out of the game by the time they are 30 -- the average NFL career lasts less than four years.

The Post's Amy Shipley reports that the University of Miami has more players -- 42 -- on NFL rosters than any other school. Miami's main rival -- the Florida State Seminoles (a T-shirt favored by Miami students reads: "I think, therefore I am not a 'Nole") -- is second with 41. The University of Florida ranks seventh with 35. But in the past 10 years, those three teams have had, combined, more than 1,000 players, all of them exceptional athletes but most of them not of NFL caliber. Which is why Shannon says that when visiting the home of a potential recruit, "I talk to the parents about everything but football."

On a recent day, Shannon was in the Palm Beach area recruiting a wide receiver and then was off to Omaha to make sure that a very large lineman was still eager to be a Hurricane.

Because South Florida is the incubator of so much high school talent (skill positions, Shannon says; for linemen, look to the Midwest, hence the Nebraska trip), during the off-season many NFL players come home to train at the University of Miami's facilities. Shannon says his players "see the fancy cars, the gold chains," so as he takes over Miami's football program, he plans to "come in with a stern attitude."

Stern adults got Shannon to the peak of his profession at age 40. A fourth-grade teacher told him, "You're very smart -- don't let anyone tell you different." A fifth-grade teacher, disapproving his choice of clothes one day, said, "Don't ever come to school like that again." When he was in junior high school, his football coach took the team to play a team in a juvenile detention center, a sobering experience.

Shannon's rules for his players include: If you miss a class, you don't start the next game. Fall below a certain grade-point average, you can't set foot off campus. A conservatively dressed man, with the elegant hands of a surgeon or pianist, Shannon wants his players to learn "how to respect life," so when "they leave the university and the football program, they will go with confidence." They will go, all of them, having taken a public speaking course.

Duffy Daugherty, who coached Michigan State from 1954 through 1972, was an aphorist ("Football is not a contact sport, it's a collision sport. Dancing is a contact sport.") and a realist. Because of alumni demands for football perfection, Daugherty said: "A football coach's main problem is that he is responsible to irresponsible people." Shannon, who like 80 percent of his players is African American, feels responsible to, and for, them.

georgewill@washpost.com
Posted by jtf at 5:36 PM

Email ThisBlogThis!Share to TwitterShare to FacebookShare to Pinterest
Labels: Football, George Will