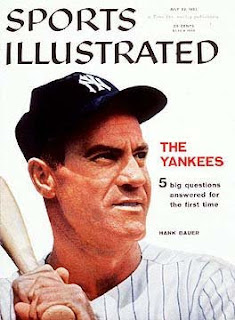 
Hank Bauer, the rough-hewn, much-decorated ex-Marine who went on to become an integral player on nine Yankee championship teams from 1949-59 and set a record that still stands of hitting in 17 consecutive World Series games, died today of lung cancer. He was 84.

Throughout his 14-year career, during which he hit .277 with 164 homers, Bauer epitomized grit, hustle and professionalism, although he attained his most enduring notoriety as the central figure in the famous drunken brawl involving six Yankee players and patrons at the Copacabana, May 16, 1957. Bauer, along with Mickey Mantle, Whitey Ford, Yogi Berra, Billy Martin and Johnny Kucks, were celebrating Martin’s 29th birthday party when, according to various reports, members of the party at the table next to them began heckling entertainer Sammy Davis Jr. and a fight broke out, with one of the patrons, a delicatessen owner named Edwin Jones, suffering a broken nose.

Jones claimed he had been cold-cocked by Bauer, but when no witnesses were able to corroborate his story, charges were dropped. For their part, however, Yankee management fined Bauer, Mantle, Ford, Berra and Martin $1,000 each and Kucks $500, and a month later traded Martin, who they considered to be a bad influence on the other players, to the Kansas City Athletics. For the rest of his life, at banquets and oldtimers day events, Bauer denied having thrown the punch that felled Jones but when asked who did, he would feign ignorance and wink.

Perhaps one reason Bauer was fingered as the perpetrator in the Copa incident was his tough guy reputation born out of his experience in the Pacific theatre of World War II for which he received two Purple Hearts for bravery and two bronze stars. After capturing an airfield in Okinawa, 58 of Bauer’s 64 platoon mates were killed in action. Bauer also fought at Iwo Jima and was wounded by shrapnel, pieces of which remained in his leg throughout his playing days.

As a player, Bauer was the unofficial Yankee “enforcer” customarily straightening out players who failed to hustle with the terse “you’re messin’ with my money” admonishment.

At the conclusion of the war, Bauer, a native of East St. Louis, Mo., signed with the Yankees’ Triple A farm Kansas City Blues and two years later made his debut in the majors. In his first full season, 1949, the righthanded-hitting Bauer batted .272 with 10 homers as a platoon corner outfielder. He would continue to platoon, mostly with Gene Woodling, until 1952 when manager Casey Stengel installed him in right field and batted him primarily leadoff even though he wasn’t blessed with blazing speed. As Stengel explained: “The fella can hit me a home run sometimes, he can go from first to third on a single and he can score from first on a double.”

Bauer’s most productive seasons were 1955 and ’56 when he had 97 and 96 RBI respectively. He hit .429 in the 1955 World Series against the Dodgers and in 1958 led the Yankees’ charge from a 3-1 deficit against the Milwaukee Braves to another world championship, batting .323 with a team-leading 10 hits and eight RBI and homers in the first, second, third and sixth games. The one “downer” for Bauer in that Series was when Warren Spahn held him hitless in Game Four to end his record streak of 17 straight games with a hit.

In the years afterward, he said often the Series hitting streak was his proudest accomplishment.

After hitting a career-low .238 in 1959, Bauer was sent to the Athletics in the big seven-player trade that brought Roger Maris to the Bronx. In 1961, his final season as a player, Bauer was named manager of the Athletics, then moved to the Baltimore Orioles as their skipper in 1964. He managed the Orioles through 1968 and in 1966 achieved one of his greatest triumphs (and eighth championship ring) when his O’s swept the heavily-favored Dodgers in the World Series. For that he earned a place on the cover of Time magazine.