Thomas Friedman: Iran's Greatest Weakness May Be Its Oil 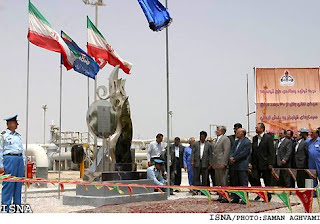 It is hard to come to Moscow and not notice what the last five years of high oil prices have done for middle-class consumption here. Five years ago, it took me 35 minutes to drive from the Kremlin to Moscow's airport. On Monday, it took me two and a half hours. There was one long traffic jam from central Moscow to the airport, because a city built for 30,000 cars, which 10 years ago had 300,000 cars, today has 3 million cars and a ring of new suburbs.

How Russia deals with its oil and gas windfall is going to be a huge issue. But today I'd like to focus on how the Soviet Union was killed, in part, by its addiction to oil, and on how we might get leverage with Iran, based on its own addiction.

Economists have long studied this phenomenon, but I got focused on it here in Moscow after chatting with Vladimir Mau, the president of Russia's Academy of National Economy. I mentioned to him that surely the Soviet Union died because oil fell to $10 a barrel shortly after Mikhail Gorbachev took office, not because of anything Ronald Reagan did. Actually, Mau said, it was “high oil prices” that killed the Soviet Union. The sharp rise in oil prices in the 1970s deluded the Kremlin into overextending subsidies at home and invading Afghanistan abroad – and then the collapse in prices in the '80s helped bring down the overextended empire.

Here's the story: The inefficient Soviet economy survived in its early decades, Mau explained, thanks to cheap agriculture, from peasants forced into collective farms, and cheap prison labor, used to erect state industries. Beginning in the 1960s, however, even these cheap inputs weren't enough, and the Kremlin had to start importing, rather than exporting, grain. Things could have come unstuck then. But the 1973 Arab oil embargo and the sharp upsurge in oil prices – Russia was the world's second-largest producer after Saudi Arabia – gave the Soviet Union a 15-year lease on life from a third source of cheap resources: “oil and gas,” Mau said.

The oil windfall gave the Brezhnev government “money to buy the support of different interest groups, like the agrarians, import some goods and buy off the military-industrial complex,” he said. “The share of oil in total exports went from 10-to-15 percent to 40 percent.” This made the Soviet Union only more sclerotic. “The more oil you have, the less policy you need,” he noted.

In the 1970s, Russia exported oil and gas and “used this money to import food, consumer goods and machines for extracting oil and gas,” Mau said. By the early 1980s, though, oil prices had started to sink – thanks in part to conservation efforts by the United States. “One alternative for the Soviets was to decrease consumption, but the Kremlin couldn't do that – it had been buying off all these constituencies,” Mau explained. So “it started borrowing from abroad, using the money mostly for consumption and subsidies, to maintain popularity and stability.” Oil prices and production kept falling as Gorbachev tried reforming communism, but by then it was too late.

In 2005, Bloomberg.com reported, Iran's government earned $44.6 billion from oil and spent $25 billion on subsidies – for housing, jobs, food and 34-cents-a-gallon gasoline – to buy off interest groups. Iran's current populist president has further increased the goods and services being subsidized.

So if oil prices fall sharply again, Iran's regime would have to take away many benefits from many Iranians, as the Soviets had to do. For a regime already unpopular with many of its people, that could cause all kinds of problems and give rise to an Ayatollah Gorbachev. We know how that ends. “Just look at the history of the Soviet Union,” Mau said.

In short, the best tool we have for curbing Iran's influence is not containment or engagement, but getting the price of oil down in the long term with conservation and an alternative-energy strategy. Let's exploit Iran's oil addiction by ending ours.
Posted by jtf at 5:21 PM