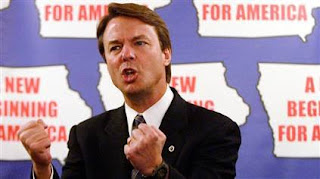 Q: What if Mary had taken Plan B after the Lord filled her with his hot, white, sticky Holy Spirit?

A: You’d have to justify your misogyny with another ancient mythology.


That update on the Baltimore Catechism comes via Amanda Marcotte of the Pandagon blog in her “FAQ ON THE CATHOLIC CHURCH’S ‘CRAZY’ TEACHINGS ABOUT BIRTH CONTROL.” In it she explains that “the intent” of “mainstream Catholic teaching” on artificial contraception “is to make women suspect their gynecologists* are out to get them and possibly kill some babies for fun.”

It’s a free blogosphere, of course, and Marcotte can ridicule my religion and its teachings all she wants (though I'll lay off her Church of the Mouse and the Disco Ball), but Democratic former North Carolina senator John Edwards, if he cares about avoiding offending Catholic voters, might care to take another look at the online writings of the woman he has just hired to be his campaign blogmaster. Her hostility to religion and in particular the Catholic Church should alarm Edwards.


It should alarm Edwards, of course, because I’d assume Edwards would want to avoid “anti-Catholic” from appearing in too many stories next to his name. And that’s not just because Catholics vote. If Edwards buys what he was saying on Meet the Press this weekend, it should thoroughly offend him too.

On Sunday, in answering a question from (Catholic) Tim Russert about gay marriage, Edwards went on about his own “faith belief.”


SEN. EDWARDS: I think it’s from my own personal culture and faith belief. And I think, if you had gone on in that same quote, that I, I have—I, I struggle myself with imposing my faiths—my faith belief. I grew up in the Southern Baptist church, I was baptized in the Southern Baptist church, my dad was a deacon. In fact, I was there just a couple weeks ago to see my father get an award. It’s, it’s just part of who I am. And the question is whether I, as president of the United States, should impose on the United States of America my views on gay marriage because I know where it comes from. I’m aware of why I believe what I believe. And I think there is consensus around this idea of no discrimination, partnership benefits, civil unions. I think that, that certainly a president who’s willing to lead could lead the country in the right direction on that.

If Edwards cares to continue to browse through the Pandagon archives, he’ll find Marcotte reacting to a story about the Catholic teaching about limbo by comparing the Catholic Church to fascist dictators.

There’s a pragmatic reason that the Vatican might be a little hesitant to come right out and say that there’s no limbo (definition here, for those who don’t know much about Catholicism) is because the concept is wielded by everyday Catholics to explain where the souls of unborn babies go, which is just an extra way to guilt trip women who have abortions. But it’s sort of a balancing act, as far as I can tell, because as most people understand it, unbaptized children go to limbo but when Jesus returns, they all get to go to heaven. So it’s a way to guilt trip women who have abortions without casting god as such an uncruel monster as to throw souls into hell that never even had a shot at sinning. So that’s limbo: it sucks enough to make women feel guilty about abortion, but it doesn’t suck so much as to run people off.

I suspect Pope Ratz will give into the urge eventually to come out and say there’s no limbo and unbaptized babies go straight to hell. He can’t help it; he’s just a dictator like that. Hey, fish gotta swim, birds gotta fly, the Pope’s gotta tell women who give birth to stillborns that their babies are cast into Satan’s maw. The alternative is to let Catholic women who get abortions feel that it’ll all work out in the end, which is just not doable, due to that Jesus-like compassion the Pope is so fond of. Still, it’s going to be bad PR for the church, so you can sort of see why the Pope is dragging ass.

Which all brings me to recommending this great post by Austin Cline at Jesus’ General about why authoritarian types are so damn interested in cobbling people’s sex lives and meddling around in people’s private sexual decisions, like in this case why the Catholic church is so interested in making sure that people can’t make the perfectly sound decision to limit their family size while enjoying a healthy sex life—either you’re going to have to forgo birth control or you’re going to have to feel guilty to the point where you fear you’re casting babies into hellfire, by their standards. It’s a way to disrupt people’s lives so the church can get more control.

Yep, that damn patriarchy, that’s what it’s all about — has nothing to do with a sacrament of marriage or other “nonsense” Catholics believe.

At least Marcotte has men she can admire, like George Tiller, the late-term-abortion practitioner, whom she regards as a “brave motherf**ker.”

She could do without the adjective when writing about Rick Santorum, with whom John Edwards served in the United States Senate from 1999 to 2004. Of the latter, Amanda Marcotte began a blog post in July 2005 thus:


The problem with Rick Santorum is that every time he talks about sex, that little part of all of us that wants to run into a preschool and yell “f**kslut” or go to a born-again church and scream about how God loves to come in our backyards for our milkshakes, well, it just grows a hundredfold, and the restraint that most of us show just flies out the window. As a Senator, however, Santorum finds himself frequently faced with many of the most pressing issues of penis insertion that have ever faced America—and so he must speak, lest his lack of self-control be manifested by f**king his desk on the Senate floor. (There’s a knothole that’s just the right size, y’know.)

While Marcotte seems to hold a special ire for the Catholic Church, it’s no surprise, given, as others have already noted in recent days, she’s written the likes of:

One thing I vow here and now—you motherf**kers who want to ban birth control will never sleep. I will f**k without making children day in and out and you will know it and you won’t be able to stop it. Toss and turn, you mean, jealous motherf**kers. I’m not going to be “punished” with babies. Which makes all your efforts a failure. Some non-procreating women escaped. So give up now. You’ll never catch all of us. Give up now.


And, by the way, Senator Edwards, if you’re not sufficiently sure that your campaign has just made a bad hire, we could get into the “Protestant anti-choice a**holes,” too.

Marcotte is clearly a staffer who should have been vetted a bit more. She represents someone John Edwards ought not be employing and serves as a warning to other candidates as they gather blogosphere supporters on their payrolls on their road to the White House. The lesson is fairly simple: Google first.