In his second book on Ronald Reagan, The Crusader: Ronald Reagan and the Fall of Communism, Grove City political science professor Paul Kengor documents Reagan’s lifelong crusade against communism and how hard he worked as president to dismantle the Soviet Empire. Kengor, who earlier wrote God and Ronald Reagan, relied on Soviet media archives, declassified presidential papers and interviews with administration insiders to reveal what the Soviets thought of Reagan and what secret actions Reagan ordered to undermine the Soviet economy, assist Poland’s Solidarity movement and aid the Afghan rebels.

Q: What exactly does it mean that you have reassessed Ronald Reagan’s life and presidency through the lens of his anti-communism?

A: Well, you could see Ronald Reagan’s life as preparing and then ultimately taking on Soviet communism. Ronald Reagan was born in 1911. The Bolshevik Revolution took place in October of 1917. The demise of communism really comes from 1989 to 1991; 1989 was the final year of Reagan’s presidency; 1991 was the actual disintegration of the Soviet Union. So really the rise and fall of Soviet communism are the bookends of Reagan’s life.

Mercifully, his mind lasted just long enough to comprehend the Cold War victory and defeat of communism. His letter informing the world that he had Alzheimer’s came in November 1994, so he had that short window from 1989 to 1994 where he could savor the victory. In fact, what historically never gets talked about is that Reagan even made a trip to the Berlin Wall and a trip to Poland in the early 1990s. The parish priest of Lech Walesa handed Ronald Reagan a saber and said, "We are giving this to you for helping us to chop the head off of Soviet Communism.”

Q: So what is it that Reagan had against communism?

A: It was really multifaceted, but I’d say three different areas: One, it was the shear brutality of the Soviet system. You’ve got these basic human rights transgressions -- freedom of speech, freedom of press, freedom of assembly. The Soviet Union repressed if not snuffed out all of those rights. Add to that the Soviet Union was responsible for the deaths of a lot of people -- anywhere from 30 million to as high as 60 million to 70 million.

Also add the fact that this was an expansionary ideology. Marx talked about world communism. So did Lenin, so did Stalin, so did Stalin’s foreign minister. There was a Comintern (Communist International), whose goal was global communism. Then you add into it the third factor -- and this is the one that everybody missed: Ronald Reagan was appalled by the institutionalized atheism of the Soviet system. What Mikhail Gorbachev called “the war on religion” was indeed a war on religion. And it was that that for Reagan convinced Reagan this was not just a bad place, this was in fact an actual “Evil Empire.”

Q: What are the most important discoveries of your book?

A: Well, there are a lot of them. That’s not just PR hype; it’s really true. One, generally speaking, no one has really presented the Soviet point of view on all of this, as I have. I spent all of the 1990s, including graduate school at Pitt, reading through old translated media archives of Pravda, Izvestia, the Moscow Domestic Service, and Tass, the official Soviet news agency. I also got transcripts of all of the Soviet news programs on TV and radio.

For example, there was a show called “Studio Nine,” which was the Soviet equivalent of “60 Minutes,” where you had basically three or four Soviet propagandists, all working for the KGB, sitting around a table, analyzing what Ronald Reagan was doing. Here I found them calling him “The Crusader” over and over and over again. I thought, “Wow! Where’s that coming from?” The Crusader? It was because they realized that Reagan had targeted them as part of what he called his “Crusade for Freedom.” Speaking of discoveries, I did not know that as early as 1950, Ronald Reagan joined a group called “The Crusade for Freedom,” which called for the liberation of Eastern Europe from Soviet communism.

Q: What was the most surprising thing that you learned about Reagan while doing this book that you didn’t already know?

There was always this view that Reagan was the product of these smart advisers who sort of tugged at his strings and manipulated him and told him what to do. By the way, the people who say that never tell you who these smart advisers ever were. But what I found was it was truly Reagan. 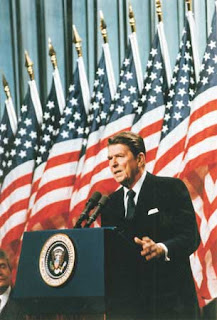 Q: What specific policies or actions did Reagan do to undermine the Soviets?

A: First of all, I should say there are at least 12. The three most important things: One would have been keeping alive the Solidarity movement in Poland, which had tentacles everywhere -- all the way to the Vatican. Two would have been aiding the Afghan rebels in Afghanistan to defeat the Soviets there, which also has a whole bunch of additional implications. Three would have been economic warfare, under which a bunch of different things fall, including trying to sabotage the Siberian pipeline.

Q: From what you know or can guess, would Reagan have gone to war in Iraq?

A: It’s impossible to know, just impossible. I would point this out: Reagan, despite the hawkish reputation, very rarely used military force. He invaded Grenada. He bombed Libya in retaliation for a terrorist bombing. But that was it. There was the deployment of Marines in Lebanon, but he really only used force twice: Grenada and Libya. So, he was not prone to do that.

Now, on the other hand, Reagan was very, very fearful of what he called “A Middle East madman” one day getting a hold of nuclear weapons. Which is why, even after Gorbachev offered to basically scrap the entire Soviet nuclear arsenal, Reagan said he still needed the Strategic Defense Initiative because even if the Soviets didn’t have nuclear weapons, one day Reagan foresaw one of these nuts in the Middle East getting them.

Q: So, "Reagan the Crusader" was on a crusade against communism, not on a crusade to bring democracy to the people of the world -- the kind of criticism leveled against George W. Bush.

A: Yeah, but this is very interesting. Reagan, in his 1982 Westminster address, used the words “march of freedom.” He said what he was going to do was extend this march of freedom into Eastern Europe and basically the Soviet Communist empire. People haven’t noticed this, but George W. Bush’s favorite Reagan speech is that speech. Bush has said many times now that he would like to continue Ronald Reagan’s march of freedom from the former communist world into the Middle East. Bush actually sees himself as sort of extending Reagan’s vision and taking it to the part of the world that has been the most resistant to democracy. Reagan would at least be hopeful of what Bush is doing. Would he have signed on to it? We can’t possible know and I can’t possibly say. Reagan would have at least said, “Yeah, I hope this works.” But as far as would he have sent the troops into Iraq? We just can’t know.

Q: Your book has not been reviewed in too many mainstream places. Do you know why?

A: That’s a good question. I’m not sure, but I will say this -- and this is not sour grapes: I’m really disappointed in how many people on the Left and in mainstream publications just seem closed-minded. They don’t seem willing to read things that are going to conflict with their view of history. I can’t get this KGB memo story on Ted Kennedy into a single mainstream source.

Q: What is the memo about?

A: It’s crazy. There’s no reason to doubt it. It was actually first reported in The Times of London, in the Feb. 2, 1982, edition, and it never made it across the Atlantic back then. It’s a May 14, 1983, KGB memo, written by the head of the KGB, Victor Chebrikov, and sent to Yuri Andropov, arguably the two highest people in the Soviet system. It concerned an offer from Sen. Kennedy to Yuri Andropov, because Kennedy was fearful of Reagan’s nuclear policies.

And Kennedy, according to this document, thought the aggressor here was not the Soviet side but Reagan. So, Kennedy sent a contact, the former Sen. John Tunney, and Tunney relayed Sen. Kennedy’s request to meet with Andropov to talk about this “Reagan problem” and how the Soviets and the United States could maybe come together to lessen nuclear tensions, which Kennedy believed Reagan was exacerbating.

This document was first found by this London Times reporter, Tim Sebastian, who also was a BBC reporter. They had a little picture of the upper-left corner of the document in The Times. Now I’m presenting it again. Kennedy’s office has not denied the document. And I can’t get anybody in the mainstream press to talk about it.

I wrote an op-ed piece on it and sent it to David Shipley of the New York Times. Shipley said he liked it, responded right away, but told me he wouldn’t be able to get it in the paper. I then sent it to another mainstream liberal op-ed page editor on the West Coast. This guy is really fair. We went back and forth and back and forth…but finally, in the end, he said, “I’m sorry but I just can’t believe that Kennedy could have done this." I said his office has not denied this. Then I said to him, “Well, OK, let’s make news together. Why don’t you or someone on your staff call Kennedy’s office and confirm it?”

He didn’t respond and that was it. I haven’t heard from him since. They won’t touch it.

Q: Is there still stuff that we don’t know about Ronald Reagan -- surprising stuff? Book-worthy stuff?

A: Oh, yeah. There’s still information out there. Certainly in the Soviet files -- the KGB files, the Central Committee archives. They have not been completely opened. So there is a lot in there on Reagan, strictly from the Soviet side, that we don’t know about.

Also, Reagan’s competence and intelligence and work ethic -- because of the biases of these people in journalism and these historians -- are still unappreciated. It looks like he probably produced the largest collection of presidential letters of any president since Thomas Jefferson.

He wasn’t sitting there watching “Bedtime for Bonzo.” In fact, he had remarkable energy for somebody in his 70s trying to run the world. There’s a lot about him that we still don’t know.