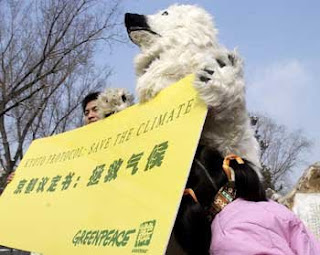 A little girl curiously checks a polar bear specimen displayed by university students to celebrate the Kyoto Protocol in a Beijing park February 16, 2005.

Was life better when a sheet of ice a mile thick covered Chicago?

Was it worse when Greenland was so warm that Vikings farmed there?

Enough already. It is time to call some bluffs. John Kerry says that one reason America has become an "international pariah" is President Bush's decision to "walk away from global warming." Kerry's accusation is opaque, but it implies the usual complaint that Bush is insufficiently enthusiastic about the Kyoto Protocol's binding caps on emissions of greenhouse gases. Many senators and other experts in climate science say we must "do something" about global warming. Barack Obama says "the world" is watching to see "what action we take."

Fine. President Bush should give the world something amusing to watch. He should demand that the Senate vote on the protocol.

Climate Cassandras say the facts are clear and the case is closed. (Sen. Barbara Boxer: "We're not going to take a lot of time debating this anymore.") The consensus catechism about global warming has six tenets: 1. Global warming is happening. 2. It is our (humanity's, but especially America's) fault. 3. It will continue unless we mend our ways. 4. If it continues we are in grave danger. 5. We know how to slow or even reverse the warming. 6. The benefits from doing that will far exceed the costs.

Only the first tenet is clearly true, and only in the sense that the Earth warmed about 0.7 degrees Celsius in the 20th century. We do not know the extent to which human activity caused this. The activity is economic growth, the wealth-creation that makes possible improved well-being—better nutrition, medicine, education, etc. How much reduction of such social goods are we willing to accept by slowing economic activity in order to (try to) regulate the planet's climate?

We do not know how much we must change our economic activity to produce a particular reduction of warming. And we do not know whether warming is necessarily dangerous. Over the millennia, the planet has warmed and cooled for reasons that are unclear but clearly were unrelated to SUVs. Was life better when ice a mile thick covered Chicago? Was it worse when Greenland was so warm that Vikings farmed there? Are we sure the climate at this particular moment is exactly right, and that it must be preserved, no matter the cost?

It could cost tens of trillions (in expenditures and foregone economic growth, here and in less-favored parts of the planet) to try to fine-tune the planet's temperature. We cannot know if these trillions would purchase benefits commensurate with the benefits that would have come from social wealth that was not produced.

In 1997, when the Kyoto Protocol's essential provisions were known, a "sense of the Senate" resolution declared opposition to any agreement that would do what the protocol aims to do. The Senate warned against any agreement that would require significant reductions of greenhouse-gas emissions in the United States and other developed nations without mandating "specific scheduled commitments" on the part of the 129 "developing" countries, which include China, India, Brazil and South Korea—the second, fourth, 10th and 11th largest economies. Nothing Americans can do to reduce greenhouse-gas emissions will make a significant impact on the global climate while every 10 days China fires up a coal-fueled generating plant big enough to power San Diego. China will construct 2,200 new coal plants by 2030.

The Senate's resolution expressed opposition to any agreement that "would result in serious harm to the economy of the United States," which the Senate correctly thought Kyoto would do. The Senate said any agreement should be accompanied by "a detailed explanation of any legislation or regulatory actions that may be required to implement" it, and an analysis of the agreement's "detailed financial costs and other impacts" on the U.S. economy.

The president is now on the side of the angels, having promised to "confront" the challenge of climate change. The confronting is one reason for his fascination with new fuels. (Another reason, he says, is U.S. imports of oil from unstable nations. Our largest foreign source of oil is turbulent Canada. Our second largest is Mexico, which is experiencing turbulence because of the soaring cost of tortillas. They are made from corn, which is ... well, read on.)

Ethanol produces just slightly more energy than it takes to manufacture it. But now that the government is rigging energy markets with mandates, tariffs and subsidies, ethanol production might consume half of next year's corn crop. The price of corn already has doubled in a year. Hence the tortilla turbulence south of the border. Forests will be felled (will fewer trees mean more global warming?) to clear land for growing corn, which requires fertilizer, the manufacture of which requires energy. Oh, my.

President Clinton and his earnest vice president knew better than to seek ratification of Kyoto by a Senate that had passed its resolution of disapproval 95-0. Fifty-six of those 95 senators are still serving. Two of them are John Kerry and Barbara Boxer. That is an inconvenient truth.