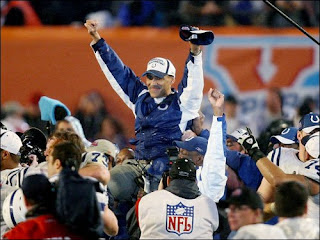 MIAMI -- They belong to Indianapolis, first and foremost, a hometown's proud and worthy world champion. But today, these Super Colts, dominant 29-17 winners over the Chicago Bears in Super Bowl XLI, belong, too, to history.

By late Sunday night, with a warm, cleansing rain continuing to fall at Dolphin Stadium, Tony Dungy became the first black coach to raise the Lombardi Trophy in victory. As it was once written of Joe Louis, he is a credit to his race -- the human race.

He not only shattered a racial barrier, but he proved that yes, hallelujah yes, good guys can still finish first, even in a sport as tough and brutal as professional football.

Even as Dungy stood at the very height of his profession, there was his son Eric joining his father for a snapshot as they stood together on a media podium. Eric gestured with his hand, noting the disparity in stature.
"Still taller than him," Eric said of his father.

On this day, though, nobody stood taller than Dungy, who, like his team, traveled a long and often painful road to this monumental day.

As Dungy spoke, Peyton Manning was across the way addressing the media. And no, there was no monkey being extracted from his back a la Steve Young. No talk of The Albatross. Reporters tried to roll out that question about validation, confirmation, whatever, and Manning was having none of it.

Good for him, anyway.

After all those close calls at the University of Tennessee, all those near-misses with the Colts, there is only one question for Manning, and it won't be asked until long after this team has properly basked in this wonderful result:

"How many will Manning and the Colts win before his career is over?"

The yeah, buts have been expunged from the Manning lexicon. He is a Super Bowl champion. And a Super Bowl MVP, even if Manning quickly acknowledged almost anybody on that team rated MVP mention.

Manning wasn't the typically dominant Manning, really couldn't have been with an insistent rain falling. But he didn't have to be, which is why you started to get the sense, especially after that Colts' beat-down in Baltimore in the divisional round, that maybe, yes, it was the Colts' time. Finally.

That's what was so tremendous about this whole championship run. The way this team, which was only supposed to go as far as Manning took them, won over and over again as a team.

All week, the story lines had centered on Dungy and Manning, two men who seemed to have so very much on the line, two men looking to cement their legacies, validate their professional lives -- even if neither was inclined to view this game in that fashion. Could Dungy get a team over the hump? Could Manning win The Big One, even if the definition of The Big One kept moving every 10 minutes?

And yet the story of this often strange and sloppy game -- this wet game -- wasn't necessarily Manning or Dungy, although both played a huge role in this victory.

Manning performed a rhapsody in patience. Dungy, cool as always, helped change the course of the game with an important challenge on a Marvin Harrison reception.

The story of this game, though, was the Colts' playoffs-long ability to run the football and stop the run -- and the pass, for that matter. They dominated from beginning to end.

Stuffing Baltimore's Jamal Lewis in the angriest road environment you've ever seen.
Coming back from an 18-point deficit, against New England no less, winning the AFC title in style.

And then coming here, to Miami, where it was sunny and gorgeous all week, only to have it rain in sheets. They not only played in Bears weather, they beat their opponent playing Bears football.

A couple of weeks ago, Dungy called one good defensive performance an aberration, two a coincidence and more a pattern.

"I think we've established a pattern," Dungy said with a smile.

They won this championship by doing it the old-fashioned way, by toeing the time-honored philosophical line about what it takes to win in the playoffs.
They ran and they stopped the run.

What was remarkable, though, not just in this game but this entire playoff run, is the fact that the Colts essentially redefined themselves when the stakes got highest.
Two months ago, could you have imagined that the Colts' stoutness against the run would mean the difference between an early playoff ouster and a Super Bowl?

They didn't just win this championship; they reinvented themselves. They blew away every long-held stereotype that has attended their ascent into the NFL's elite. Soft? Hardly. Incapable of winning in the elements? No, sir.

"To go through the things we went through, I just feel complete joy," Dungy said. "We may have had better teams in the last couple of five years, but none of them were as ready to win as this. . . . To be able to out-play them at their game says a lot."

This whole remarkable experience -- and this will be a remember-when moment for every sports fan in the state -- was a testament to the power of faith. One year ago, yes, the Colts were dominant, maybe even better than this championship team, something Dungy suggested after the game. But sometimes, you have to go through more tests.

When it counted most, there was greatness, a champion's mettle. "We imposed our will," Rhodes said proudly.

The rain continued to fall hard as the happy night wore on, soaking everything in its way. But not the Colts' collective joy. And the Lombardi Trophy, the one being shared by Jim Irsay and Dungy and Manning and everybody else on that remarkable team? It had never shone so brightly.