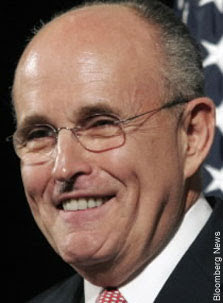 February 5, 2007 -- UNTIL now, the status of front-runner in the Republican primaries for president was jointly held by Arizona Sen. John McCain and former New York Mayor Rudy Giuliani. McCain is clearly no longer the front-runner. In the last week or so, Giuliani has moved out to a clear lead.

* A Fox News poll of Jan. 30-31 shows the former mayor jumping out to a significant lead among Republicans - 34 to 22 percent.

* A Gallup poll taken Jan. 25-28 shows Giuliani is better liked by Republicans than McCain -74 to 21 percent and more trusted to handle a crisis (68-20). Some 60 percent say Giuliani "better understands the problems of the average person," against 33 percent who pick McCain. By 58-34, America's Mayor is seen as the stronger leader.

Conversations with conservative activists also show a remarkable openness to supporting Giuliani - a belief that he can overcome (perhaps finesse) his pro-choice, pro-gun-control, pro-gay-rights and pro-immigration positions. Feelings seem bitterer over McCain's role in Washington battles - his opposition to the Bush tax cuts and his support for "amnesty" for illegal immigrants and for campaign-finance reform.

Giuliani has developed an effective parry to charges that his pro-choice stance would undo eight years of pro-life heavy lifting by the Bush administration. He's saying he'd oppose partial-birth abortion and work to continue to curtail Medicaid funding for abortion. More, he'd appoint judges like Justices Samuel Alito and John Roberts to the Supreme Court.

None of this means the race is over, of course. Even if McCain falters, some candidate would likely gain traction as the "true conservative" in the race. But who?

Massachusetts' former Gov. Mitt Romney is flailing, thanks to his flip-flops over the last decade on abortion (pro-life, then pro choice, now pro life again) and on gay issues. These reasonable concerns - and unreasonable bigotry about a Mormon candidate - may doom him.

Former House Speaker Newt Gingrich seems stalled in the low teens in the polls and not likely to move up.

So a dark horse will probably move up. These names are still obscure, but get to know them - lightning will soon strike at least one: Arkansas Gov. Mike Huckabee (our favorite), Kansas Sen. Sam Brownback, ex-Virginia Gov. James S. Gilmore, former Wisconsin Gov. Tommy Thompson and Reps. Duncan Hunter and Tom Tancredo.

If all the GOP's starters go on the disabled list, one of these minor leaguers may make it to the World Series by capturing the Republican domination. Of course, that "winner" will then have to face the Big Mean Clinton Machine - which in the latest polls is looking likely to clean the floor over in the other league.
Posted by jtf at 8:26 AM