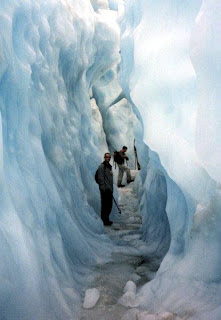 For the past two weeks the weather in Pittsburgh has been typical for January -- it's snowed almost every day. And for the first time this winter I've heard complaints about the weather at work. I heard none during our unseasonably warm December.

I note this to put in perspective the latest scare report on global warming from the United Nations. Average global temperatures could rise by 2 to 4.5 degrees Celsius (3.6 to 8 degrees Fahrenheit) by 2080 if carbon dioxide levels in the atmosphere double, according to the summary of an upcoming report by the Intergovernmental Panel on Climate Change. This could result in flooding in coastal areas and water shortages that could affect billions of people. And this is based on hypothetical piled upon hypothetical and computer models which cannot duplicate the actual climate of the present or the recent past.

There is no question the planet is getting warmer. In the 20th century, average global temperatures rose by 0.6 degrees Celsuis (1 degree Fahrenheit). Most of that warming took place before 1940, a fact which those who attribute warming chiefly or entirely to human activity usually ignore.

But the planet is always getting either warmer or cooler. The current warming trend began about 300 years ago, in the depths of the Little Ice Age (A.D. 1350-1900).

The Little Ice Age followed the Medieval Warm Period (A.D. 800-1300), when global temperatures were about as warm as the climate-change panel predicts they might be in 2080. In those days Greenland was actually green, and wine grapes grew in Nova Scotia.

Leaks of the panel's report coincided with publication of two books which link climate change to a long, moderate solar cycle.

In "The Chilling Stars," Henrik Svensmark and Nigel Calder discuss how cosmic rays amplify small changes in the sun's irradiance, creating 1- to 2-degree Celsuis cycles in temperatures on earth.

Sun spot activity has reached a 1,000-year high, said scientists affiliated with the Max Planck Institute in Gottingen, Germany, and the Institute for Astronomy in Zurich, Switzerland, in a 2004 report. More sun spots mean Earth will grow warmer; fewer mean it will turn colder. Solar radiation has increased by 0.05 percent per decade since the 1970s, concluded a NASA-funded study in 2003.

Dr. Habibullo Abdussamatov, head of the space research laboratory at the Pulkovo Observatory in St. Petersburg, Russia, says the alarmists have confused cause and effect. As solar radiation warms the earth, CO2 is released into the atmosphere from the world's oceans, he said last month.

There's considerable evidence of global warming on Mars, Dr. Abdussamatov said. Since there are no people on Mars, it's clear the warming there and here is due to the sun, he said.

Every change in climate has pluses and minuses. But for humans, warmer is usually better. The Medieval Warm Period was a time (mostly) of peace and plenty; the little Ice Age (mostly) of starvation and war.

As evidence mounts that it is the sun and not man that is responsible for global warming, the alarmists grow more strident and try to stifle debate. Al Gore canceled a long-standing interview with a Danish newspaper last month because he would have had to appear with Bjorn Lomborg, a former member of Greenpeace, but a global-warming skeptic. Heidi Cullen, an "expert" for the Weather Channel, has said meteorologists who disagree with her about global warming should be decertified.

"Some of us are wondering if we have created a monster," he told The Houston Chronicle.

If Dr. Abdussamatov is right, we'd better hope there is some truth to the man-made global-warming hypothesis. Solar irradiation has peaked and begun to fall, he said. This will result in a cooling period of about 50 years, beginning around 2012.