Plots and paranoia are mainstream views for Muslims of Sparkbrook

by Andrew Norfolk
The Times of London
February 02, 2007


In this quiet suburb, almost everyone believes the arrests were meant to demonise Muslims

To wander the streets of Sparkbrook yesterday, from shabby corner shop to proud, white-domed mosque, was to enter a world where conspiracy theories are the breath of life. 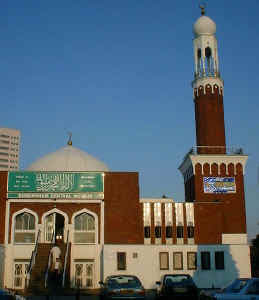 Many ordinary Muslims did not believe that Wednesday’s arrests were an act to foil a terrorist plot aiming to visit unspeakable barbarity on a young British soldier.

Rather the entire operation was a giant con trick. This fits a growing perception of a post-9/11 world in which innocent Muslims are demonised, and the terror threat manufactured to suit the dark designs of the West’s Judaeo-Christian elite.

The decision to distribute 5,000 multilingual leaflets, carefully setting out details of the anti-terrorist operation and the events leading up to it, may have sought to offer a well intentioned reassurance “that the police are not targeting communities or faiths, but suspected criminals”.

To many Muslims that message has fallen on deaf ears. That many seem not to believe police reassurances is at least in part because they are listening to a very different message from mosques across the city. Take the Birmingham Central Mosque, where up to 4,000 people will be attending Friday prayers today.

Its chairman for the past 32 years has been Mohammed Naseem, a past champion of interfaith dialogue who was for many years regarded as a voice of Islamic moderation. A year ago, he was awarded an honorary doctorate by the University of Birmingham.

Dr Nasseem, 83, yesterday told The Times of his certainty that the nine arrested men were innocent of any crime and would eventually be released without charge.

He spoke of his conviction that the Government was “pursuing a policy of maintaining a perception of a [terrorist] threat to justify the draconian anti-terror laws they have been passing”.

He went on to compare Tony Blair’s Britain to Nazi Germany and the Soviet Union under Stalin. People were beginning to realise, he said, that the Government had embarked on “a campaign to strike terror in the hearts of the Muslim people”.

And Dr Naseem is said to be a voice of the mainstream. Indeed, he explicitly condemns terrorism and “the killing of innocent people”. He was keen to appeal for calm yesterday and to urge Muslims “not to lose their dignity by taking the law into their own hands”.

As fellow believers left his mosque after lunchtime prayers yesterday, many were reluctant to discuss the arrests. Some complained that their words would be distorted and one man loudly suggested that it would be more appropriate to “go to the Church and ask the preacher”.

Mohammed Idrees was prepared to talk. A 37-year-old car mechanic, he was polite, friendly and utterly certain that any plot to kill a British Muslim soldier had been the work of “the Government or people hired by the Government”.

Mr Idrees went on to explain that his duty as a Muslim came before his duty to Britain. He would leave the country rather than fight against a fellow Muslim in a country such as Iraq or Afghanistan.

There are mosques in Birmingham whose views are far more radical than the Central Mosque.

The Markazi Jamiat Ahl-e-Hadith, on Green Lane, was outraged to be the subject of an undercover television investigation last month in which a preacher was secretly filmed as he allegedly spouted hatred of Christians and Jews. Osama bin Laden was better than a thousand Tony Blairs, explained Abu Usamah, before going on to describe homosexuals as “perverted, filthy dogs” and explaining that all women have a deficient intellect.

The mosque, which is affiliated to the Muslim Council of Britain, later complained that it was “committed to promoting interfaith dialogue and political harmony”. It said it did not necessarily agree with the views of all the scholars who spoke in its premises.

For some of the hardline Salafists who run a bookshop and a mosque in the Small Heath area of Birmingham, even the fundamentalists of Ahl-e-Hadith come across as weak-kneed liberals who are hardly fit to be called Muslim.

And yet even they condemn terrorism. For the real extremists, one need only search the internet. Here, it is not difficult to find those who believe that Lance Corporal Jabron Hashmi, from Birmingham, who last July became the first British Muslim soldier to die in Afghanistan, was an apostate traitor to Islam who fully merited his fate.

A message board entry on one website says of the fallen soldier: “I’m a British Muslim and all I can say is ha, ha, ha. Hope this bastard died a slow and painful death.” Another contributor wrote: “Shame on him and his family,” while posters on the Hizb ut-Tahrir website condemn him as a “traitor who got what he deserved”.

Lance Corporal Hashmi’s brother, Zeeshan, 27, himself a former soldier who is now reading Arabic at Cambridge, said yesterday that the extremists must not be allowed to triumph. The alleged plot, if carried out, would have had terrible repercussions for Muslims worldwide, he said.

“What I would say to the extremists is that extremism does not change anything. If you really want to make a change and be effective, be part of the system and work peacefully within.”

Mr Hashmi’s views would have been warmly supported by Mohammed Yousaf, 67, the only person to emerge from the Central Mosque prepared to say that the kidnap plot may have been genuine.

“I can’t understand it. What is wrong with them? Why do they have such hate in them?” he said.

* Azzar Iqbal, 38, who runs a pizza takeaway business, was arrested at his home in Ward End Park Road, Alum Rock. Arrived in Britain from Kashmir in 1977. Through his cousin he denies any involvement

* Amjad Mahmood, 29, runs a greengrocer’s. Was arrested at his home in Jackson Road, Alum Rock. His brother said he has two sons

* A bookseller, 29, father of two, who was arrested at his home in the Sparkhill area of the city. He runs the Maktabah bookshop

* A schoolteacher who lives with his wife and two children in north Birmingham. Neighbours say that he is tall, well built and in his thirties. Was arrested at his home

* An unemployed father of four who returned from Pakistan. Was arrested at Foxton Road, Alum Rock

* A man who was picked up by police on a motorway

* Another man was arrested at an undisclosed location
Posted by jtf at 3:18 PM