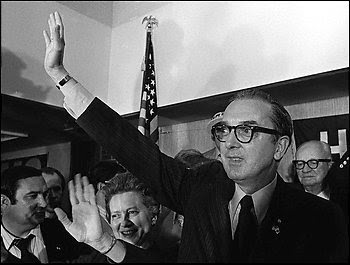 Let me set the scene…

All the major networks had just “called the race” in Helms’s favor. My wife and I, along with other Helms loyalists and aides, were in a hotel suite in downtown Raleigh watching the returns with the Senator and his wife “Ms. Dot.”

Helms’s supporters had gathered in the first floor ballroom along with all the NC press corps and other media from across the country and the world. As Dan Rather of CBS reluctantly “called the race” for Helms -- I recall seeing a big grin coming over the Senator’s face.

By now, the time had arrived to exit the suite and head downstairs so Senator Helms could once again graciously accept another six year term and thank the people for their supported. We all crowded into the elevator.

When we disembarked and we were immediately swamped by a phalanx of reporters and cameras. I, along with several members of Helms staff, formed a cocoon around the Senator and his wife -- working to get them through the crowd to the stage and the awaiting microphones. The crowd was at “fever pitch” crying Jessse, Jesseee!

Helms -- who understood the art of seizing the moment” better than almost any other public figure I have been associated with -- paused after getting to the stage. He waited for the crowd to quiet down. Then, at precisely the right moment, Senator Helm’s said in his Southern drawl…“I’d have been down here sooner -- but I was watching the grieving face of Dan Rather as he announced my re-election to the United States Senate.”

The crowd in the ballroom went nuts.

Most of the pundits had written off Ronald Reagan as presidential prospect after his efforts to unseat then President Gerald Ford resulted in a string of defeats in the 1976 Republican primaries. Senator Helms support for Reagan in NC in the 1976 primary produced 52-48 victory for Reagan’s troubled candidacy – propelling him on to the Republican convention in Kansas City where Reagan captured if not the votes the hearts and mind of the delegates with his performance and speech that year. Many would agree that 1976 set the stage for Reagan’s victory in the 1980. The “Reagan Revolution” that followed pulled America out of’ Jimmy Carter’s malaise”, and back on the road to fiscal prosperity. And with Jesse Helm’s help Ronald Reagan hastened the end of communism worldwide.

It is no secret that Helms was no fan of United Nations. During his tenure as Chairman of the Senate Foreign Relations Committee Jesse Helms challenged the United Nation’s bureaucracy by refusing to approve the payment of America’s dues.

To Helms it was a matter of principal and conscience. Helms bottled up appropriations to pay millions of US back dues to United Nations until he got the UN to agree to make substantial reforms. He also was instrumental in the passage of the Helms-Burton Act that tightened the embargo on Fidel Castro’s Cuba and he worked to scuttle the Comprehensive Nuclear Test Ban Treaty in 1999. As a statesman, Helms responded to accusations of obstructionism by saying his role was to slow the wheels of diplomacy and carefully consider America’s international commitments. Helms understood that he had the power to help shape US international policy by blocking initiatives and nominees with whom he disagreed.

The senior senator from North Carolina always had time for his constituents and especially for young people. Through the years of his service, the Senate interns and pages loved him. He was one of their favorites on the Capitol Hill. For those fortunate enough to have known and worked with him, we will remember Senator Helms as an “old school Southern gentlemen” who was principled and polite and courteous – even to those with whom he disagreed. His Senate colleagues on the opposite side of the isle may have argued with him -- but they always knew where he stood. Senator Helms went to Washington -- but never became a part of Washington. He remained loyal to his old friends, steadfast in his values and beliefs, and always true in his heart to the people of North Carolina.

The institution of the United States Senate was not been quite the same without him and we in NC are proud of the role that this unique and special “Tarheel” played in the history of our country and on the world stage.

He will be profoundly missed.

Mr. Rotterman is a senior fellow at the John Locke Foundation and a GOP consultant.

Reader Comments: (25)
Here are the comments submitted by our readers. Click to view all
Posted by jtf at 8:31 AM