How Hostages, And Nations, Get Liberated 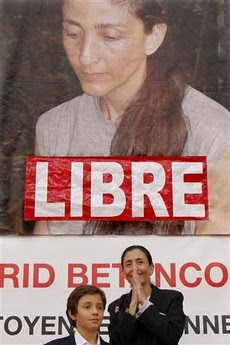 WASHINGTON -- On the day the Colombian military freed Ingrid Betancourt and 14 other long-held hostages, the Italian Parliament passed yet another resolution demanding her release. Europe had long ago adopted this French-Colombian politician as a cause celebre. France had made her an honorary citizen of Paris, passed numerous resolutions and held many vigils.

Unfortunately, karma does not easily cross the Atlantic. Betancourt languished for six years in cruel captivity until freed by a brilliant operation conducted by the Colombian military, intelligence agencies and special forces -- an operation so well executed that the captors were overpowered without a shot being fired.

This in foreign policy establishment circles is called "hard power." In the Bush years, hard power is terribly out of fashion, seen as a mere obsession of cowboys and neocons. Both in Europe and America, the sophisticates worship at the altar of "soft power" -- the use of diplomatic and moral resources to achieve one's ends.

Europe luxuriates in soft power, nowhere more than in l'affaire Betancourt in which Europe's repeated gestures of solidarity hovered somewhere between the fatuous and the destructive. Europe had been pressing the Colombian government to negotiate for the hostages. Venezuela's Hugo Chavez offered to mediate.

Of course, we know from documents captured in a daring Colombian army raid into Ecuador in March -- your standard hard-power operation duly denounced by that perfect repository of soft power, the Organization of American States -- that Chavez had been secretly funding and pulling the strings of the FARC. These negotiations would have been Chavez's opportunity to gain recognition and legitimacy for his terrorist client.

Colombia's President Alvaro Uribe, a conservative and close ally of President Bush, went instead for the hard stuff. He has for years. As a result, he has brought to its knees the longest running and once-strongest guerrilla force on the continent by means of "an intense military campaign (that) weakened the FARC, killing seasoned commanders and prompting 1,500 fighters and urban operatives to desert" (Washington Post). In the end, it was that campaign -- and its agent, the Colombian military -- that freed Betancourt.

She was, however, only one of the high-minded West's many causes. Solemn condemnations have been issued from every forum of soft-power fecklessness -- the EU, the U.N., the G-8 foreign ministers -- demanding that Robert Mugabe of Zimbabwe stop butchering his opponents and step down. Before that, the cause du jour was Burma, where a vicious dictatorship allowed thousands of cyclone victims to die by denying them independently delivered foreign aid lest it weaken the junta's grip on power.

And then there is Darfur, a perennial for which myriad diplomats and foreign policy experts have devoted uncountable hours at the finest five-star hotels to deplore the genocide and urgently urge relief.

What is done to free these people? Nothing. Everyone knows it will take the hardest of hard power to remove the oppressors in Zimbabwe, Burma, Sudan and other godforsaken places where the bad guys have the guns and use them. Indeed, as the Zimbabwean opposition leader suggested (before quickly retracting) from his hideout in the Dutch embassy -- Europe specializes in providing haven for those fleeing the evil that Europe does nothing about -- the only solution is foreign intervention.

And who's going to intervene? The only country that could is the country that in the last two decades led coalitions that liberated Kuwait, Bosnia, Kosovo and Afghanistan. Having sacrificed much blood and treasure in its latest endeavor -- the liberation of 25 million Iraqis from the most barbarous tyranny of all, and its replacement with what is beginning to emerge as the Arab world's first democracy -- and having earned near-universal condemnation for its pains, America has absolutely no appetite for such missions.

And so the innocent languish, as did Betancourt, until some local power, inexplicably under the sway of the Bush notion of hard power, gets it done -- often with the support of the American military. "Behind the rescue in a jungle clearing stood years of clandestine American work," explained The Washington Post. "It included the deployment of elite U.S. Special Forces ... a vast intelligence-gathering operation ... and training programs for Colombian troops."

Upon her liberation, Betancourt offered profuse thanks to God and the Virgin Mary, to her supporters and the media, to France and Colombia and just about everybody else. As of this writing, none to the United States.

letters@charleskrauthammer.com
Posted by jtf at 6:07 AM