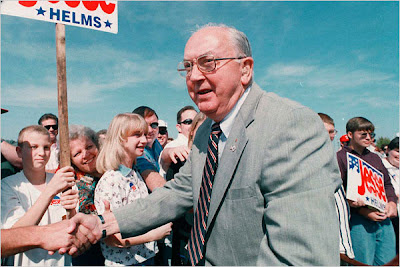 Mr. Helms running for Senate in 1996.
Photo: Alan S. Weiner for The New York Times
Upon hearing the news July 4th that Jesse Helms had passed away, conservatives remembered and hailed the former senator from North Carolina. Certainly, HUMAN EVENTS readers felt that they had shared Helms’ three decades in the Senate (1972-2002). Not only had those years and all of his rock ‘em, sock ‘em campaigns been chronicled but HUMAN EVENTS had begun carrying the young Helms’ editorials back when he was a television commentator in Raleigh in the early 1960’s.
Whatever the cause—from opposition to the SALT II and Panama Canal treaties and federal funding for salacious art to keeping his colleagues in session over holidays to stop a gasoline tax increase—the senator was more often than not leading the charge. Indeed, a case can be made that with the exceptions of Barry Goldwater and Ronald Reagan, the figure most pivotal to the success of postwar conservatism was Jesse Helms.
When he retired from the Senate in ’02, Helms was hailed by opposite numbers such as Irish rocker Bono and Sen. Joe Biden (D.-Del.), who now wields the North Carolina Republican’s old gavel as chairman of the Senate Foreign Relations Committee. Their disagreements with Helms notwithstanding, they praised him as a man of principle and a gentleman.


Reader Comments: (10)
Here are the comments submitted by our readers. Click to view all
Posted by jtf at 8:41 AM