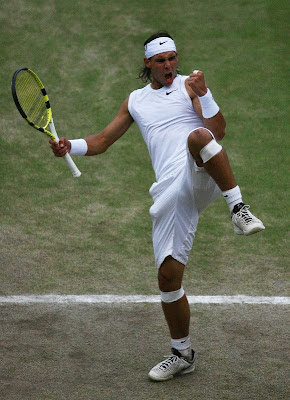 LONDON - JULY 06: Rafael Nadal of Spain celebrates winning match point and the Championship during the men's singles Final match against Roger Federer of Switzerland on day thirteen of the Wimbledon Lawn Tennis Championships at the All England Lawn Tennis and Croquet Club on July 6, 2008 in London, England. (Photo by Ian Walton/Getty Images)

Has sport ever been so dramatic? Has a Wimbledon final, predicted to be one of the finest of all time, ever so outdone its’ billing? Has tennis of this miraculously high quality ever been played so long and so late on the most hallowed of courts?

For those fortunate enough to be inside Centre Court as darkness was falling and the luminous clock on the scoreboard ticked to 9.16 pm at almost the precise moment Rafael Nadal sunk ecstatically to the turf after Roger Federer’s final forehand thudded into the net, the memory will live with them to their dying day.

This truly was history being made and though the elements tried to intervene, they could not stop this becoming a masterpiece. The wind buffeted and blew, the rain came and darkness fell but still this was tennis of the very highest standard that mere mortals can only dream of recreating.

Not only is Nadal the first man to lift the trophies of the French Open, Queens Club and Wimbledon within the space of month. He also did it in the longest final ever played at the All England Club and, in his opinion, he overcame the greatest player in history.

Federer had his sights set on a sixth successive Wimbledon title, so beating the record he now has to share with Bjorn Borg. And there were moments during this great contest that the world no.1 did not just live up to his reputation, he further enhanced it.

Why was it Nadal eventually prevailed after 4 hours and 48 minutes of sheer drama that was in fact spread over nearly seven hours because of two cruel rain delays? Ultimately it was a question of which of these tennis superstars had the greater mental strength in a true battle royal.

Other aspects of course came into play, not least superior night vision. Surely if Nadal had not finally won 6-4,6-4,6-7,6-7,9-7 when he did, then the players would have been ushered off for the night to return after daylight had returned. Those who thought the conditions were dark as Andy Murray finally prevailed against Richard Gasquet six days earlier would have been amazed that such supreme tennis could be played in such conditions.

But Nadal is unquestionably a superhuman performer with the resolve and will that now makes it clear that anything is possible. He shrugged off the disappointment of seeing two \Championship points go to waste in the fourth set tie-break but then stood firm in the face of enormous pressure as Federer, of course intent on completing a comeback that would have demanded a rewriting of the history books.

Nobody had battled back from a two set deficit to win the men’s final at Wimbledon since Henri Cochet beat his French compatriot Jean Borotra
81 years earlier. And no player had recovered from match points down to win the title since Bob Falkenberg beat John Bromwich in 1948.

The improvement in Nadal’s grass court game over the last few years is truly outstanding. Though he may have delivered just six aces compared to Federer’s 25, he still served supremely with 73% of his first deliveries getting into play. So many of these were hugely effective body serves making a telling return from the world’s paramount grass court expert virtually impossible. The fact Federer was successful on just one of 13 break point opportunities speaks volumes.

Surely now the rivalry that is already one of the most compelling in tennis history will continue and hopefully scale to new heights of excellence. But Nadal has not just brought to a close Federer’s imperious 65 match winning run on grass. He has established another step in the evolution of the game and the standard continues to rise and rise.