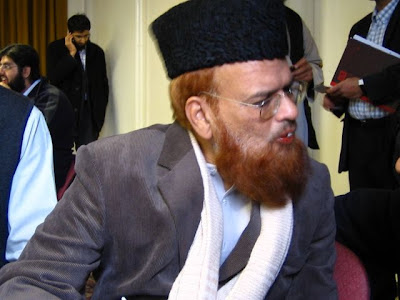 
Sheik Muhammad Taqi Usmani has been a rock star of the Islamic finance world, sitting on the sharia supervisory boards of no fewer than a dozen Islamic banks and financial institutions worldwide.

For nearly a decade, the mufti also has advised the Dow Jones Islamic Market Index, which licenses more than 25 stock funds that comply with Islamic laws forbidding certain Western-style investments. The venerable Dow Jones & Co. first retained him in 1999.

Usmani's name is now missing from the Dow Jones website, where it had previously been prominently displayed. His bio and photo suddenly vanished without explanation.


Meanwhile, all references to Dow Jones disappeared from the website of the North American Islamic Trust, or NAIT, which runs a sharia-compliant mutual fund out of Burr Ridge, Ill.


For years the fund had been called the Dow Jones Islamic Fund. Dow had lent NAIT its good name under a licensing agreement.


But recently the trust felt compelled to rename its lead portfolio the "Iman Fund," and amend several pages in its prospectus to remove all references to Dow Jones, as well as Usmani. Again, no explanation was offered.


What's behind the mystery? It's all been very hush-hush, but according to a high-level document I've obtained, along with interviews with company insiders, Dow Jones recently terminated NAIT's license and dumped Usmani to protect its brand. The company, now under new management, no longer wants to be associated with either of them, especially after they received a spate of bad publicity this year.


Articles published on this webzine -- as well as in the National Review, Investor's Business Daily and the Washington Times, among other media -- have called attention to Usmani's fatwahs demanding that Muslims living in the West conduct or support violent jihad against infidels at every opportunity.


"Killing is to continue until the unbelievers pay jizyah (subjugation tax) after they are humbled or overpowered," the radical Pakistani cleric wrote in his book, "Islam and Modernism," which in 2006 was translated from his native Urdu into English.


Usmani advocates spreading sharia law in America and the West -- the barbaric legal code that not only justifies holy war, but the stonings, floggings, amputations and even beheadings for petty crimes seen in Muslim nations such as Saudi Arabia, Iran and Sudan. The aim of Muslims, he wrote, is to "take out people from the rule of people and put them under the rule of Allah."


More, Usmani has run a Pakistani madrassa that's trained thousands of Taliban, according to the Washington-based Center for Security Policy.

Usmani is no longer employed by Dow Jones, which says it only recently learned of such "allegations."


NAIT, which until a few months ago managed a $40 million Dow Jones portfolio, also has come under fire.


Allegedly, the trust is a Saudi-tied front for the pro-jihad Muslim Brotherhood that holds title to some of the most radical mosques in America.


The Justice Department last year named NAIT an unindicted co-conspirator in a terror money-laundering scheme to funnel more than $12 million to Hamas suicide bombers and their families under the guise of charity.


Dow has since revoked NAIT's license.


The moves against Usmani and NAIT were made quietly, without any media announcements, by Dow Jones' front office in South Brunswick, N.J.

After NAIT's links to terrorism were brought to its attention by the media, "Dow Jones terminated its license agreement with the NAIT subsidiary and required it to remove all reference to Dow Jones from its website and fund-related offering materials," Dow Jones Indexes President Michael Petronella confirmed, following the mysterious disappearance of such references from NAIT's website.


Explaining Usmani's departure, he cited "certain allegations related to Mr. Usmani who was, at the time, a member of the DJIM Index Sharia Advisory Board."


"Mr. Usmani has since resigned from our board," he asserted.


Petronella explained the changes in a May 29 letter to officials with the Center for Security Policy, a leading watchdog against the spread of Islamofascism in the West.


CSP president Frank Gaffney and the group's top lawyer had fired off a legal memo to Dow charging it with "covering up" material facts from the investing public about the sharia-compliant funds it licenses -- namely, that sharia advisers like Usmani "embrace the law of violent jihad that seeks America's destruction." Petronella responded that Dow Jones had already taken corrective action based on earlier media reports.


Indeed, sharia-compliant funds offer little transparency. They disclose neither the radical ties of the scholars who are advising and running them, nor the subversive tenets that dictate the structuring of the investments.

The prospectuses merely state the investments are "ethical" or "socially acceptable," when in fact they're grounded in a religious doctrine that threatens America and the West.


Lost in Wall Street's scramble to grab management and other fees from these Islamic-compliant funds, which are growing fast thanks to Arab petrodollars, is that the funds must "purify" their returns by transferring at least 3% into Islamic charities, many of which funnel funds to terrorists.

So, the American financial community may unwittingly be helping our sworn enemy.


Dow Jones' dumping of one of its top sharia advisers and licensees is a welcome setback to the burgeoning sharia-finance industry in America, which forbids investments in key businesses that drive our economy, including financial services, entertainment and aerospace-defense, as well as alcohol, tobacco and pork-related products.


It's also a serious blow to the credibility of one of the world's leading sharia-finance authorities, as well as that of America's largest mosque landlord.


But the case merely points up the unknown risks associated with Islamic finance.


What other sharia advisers are closet jihadists lusting after the blood of infidels? What other Islamic investment funds may be steering money to terrorists with the imprimatur of one of Wall Street's most respected institutions?

- Paul Sperry is a Hoover Institution media fellow and author of Infiltration: How Muslim Spies and Subversives Have Penetrated Washington. He can be contacted at Sperry@SperryFiles.com.
Posted by jtf at 6:16 AM

Email ThisBlogThis!Share to TwitterShare to FacebookShare to Pinterest
Labels: Economics, Islam and The West