Against all odds, Bobby Murcer taught us to keep believing 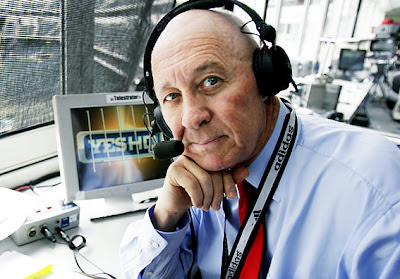 Murcer is survived by his wife, Kay, and their two children, Todd and Tori.
Credits: Slocum/AP

Near the end of the 1995 season, the seismic shift in Yankees history did not escape Bobby Murcer.

On Aug. 13, Mickey Mantle died. Nine days later, Aug. 22, Phil Rizzuto packed up his microphone and retired. Now, it was late September and clear Don Mattingly was nearing the end of his career.

Murcer sat talking to a reporter. He smiled while reminiscing about Rizzuto, even hinting - with a wink and a nod - that Scooter, who spent 54 years as a player and broadcaster, could still make a comeback. Murcer's admiration for Mattingly, as a player and person, was evident. His tone of voice was reverential.

The Mantle part of this conversation was tough. Shortstops who were discovered by the same scout, Mantle and Murcer eventually set up shop in the outfield, outside those monuments in the Bronx. Two Okies who never lost their twang. Murcer didn't ever quite fill The Mick's shoes, but with heart and hustle he earned as much love.

Murcer had even more love for Mantle.

So, on this late September afternoon, the words did not come easy. Murcer choked back tears. He paused to compose himself as he recounted the day Mantle died. He woke up to hear the news on the radio. Then he and his wife, Kay, placed a call to Merlyn Mantle.

"She told us Mickey had gone peacefully," Murcer said. "We all know we are going to die someday and as much as we prepare for it we're never really ready when the actual event happens."

That's where we all are today. 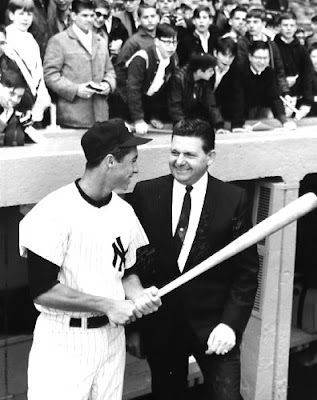 On Opening Day, 1966, a 19-year-old Bobby Murcer chats with his father, Bobby Murcer Sr., in the dugout at Yankee Stadium.
Credits: Clarity/News

In 2006, on Christmas Eve, the diagnosis the doctor gave Murcer was grave - a brain tumor. In the darkness of winter, faced with his own mortality, it was Murcer who comforted. It was Murcer who made you feel everything was going to be all right, no matter how long the odds were.

We all believed Murcer. We also believed in him. Murcer, who succumbed in that fight Saturday at the age of 62, was not just a player. For 22 years, in your living room talking baseball, he shared his summer nights. He was a friend. For Murcer, it wasn't only about pitch counts, swinging through the zone, or first-guessing every managerial decision.

Murcer was genuine. A baseball conversationalist. A storyteller with no pretense. A guy who liked to laugh, mostly at himself. Look into our baseball broadcast booths. With the exception of .Ralph Kiner, who has been relegated to cameo status by SNY, there is no one in the Bronx or Queens with the same one-on-one connection Murcer had with fans.

Rizzuto had it. So did Bob Murphy. Now they are all gone, replaced by technocrats big on strategy and ego, but so very small when it comes to sincerity and likability - qualities that cannot be taught.

Or readily recognized by various suits. Beginning in the early 1990s, February would roll around and Murcer still would not have been offered a Yankees broadcasting contract. That fact would find its way into the newspapers. Suddenly, George Steinbrenner would start "encouraging" someone to sign Murcer. 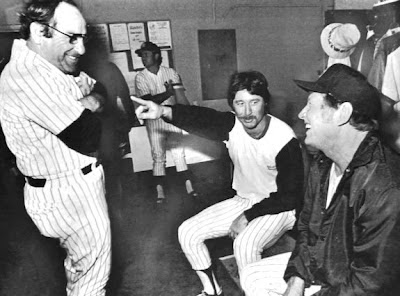 Even when the Yankees Entertainment & Sports Network was created, it seemed Murcer was never a priority to the people running it. That was reflected by the number of games he worked.

Other voices, including some who never played for the Yankees or were part-time Bombers, may have been blessed with more assignments, but not with the special bond Murcer had with Yankee fans.

Murcer never, ever, acknowledged any perceived slight. In a business full of insecurity, he was secure in himself. When he was forced to confront this crisis in his health, those very same fans who saw him as family uncapped a reservoir of love. They fueled Murcer for the fight of his life.

After six hours of surgery to have the tumor removed, and after a January 2007 pathology report revealed the tumor was malignant, Murcer kept on pushing. Kept on pushing all the way to the 2007 Yankee Stadium opener. Tampa Bay. Top of the third inning. There Murcer stood - bald, beautiful and smiling.

With his YES boothmates Michael Kay, Ken Singleton, and Joe Girardi at his side, Murcer surveyed the scene and waved to the fans. Rod Stewart's "Forever Young" sounded from the PA. The crowd of 56,035 stood and cheered. Yankee players did the same. Some even pointed up to the broadcast booth.

"If anyone can get well because of that," Murcer said, "I'm well already." 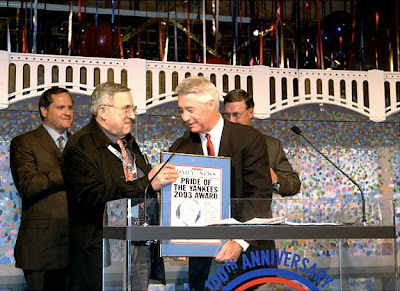 This was the last visible tribute to Murcer, but not the most important one. That tribute was delivered to others, some who never even saw him hit a home run or make a great catch, by Murcer himself. The way he kept on living, smiling, spreading optimism, gave so many others fighting cancer renewed faith and hope.

This was Bobby Murcer's last gift.