Tony Snow Dead at 53, A Tribute to a Catholic Journalist 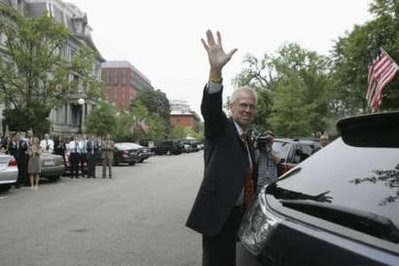 Former White House Press Secretary Tony Snows waves goodbye as he departs the White House in Washington, on his final day at the office, September 14, 2007. Snow, 53, who had been a conservative radio and television commentator, resigned in August 2007 as Bush's spokesman after taking the job the previous year. Snow died early July 12, 2008 of cancer. REUTERS/Chris Greenberg/The White House/Handout (UNITED STATES).

"It’s trendy to reject religious reflection as a grave offense against decency. That’s not only cowardly. That’s false. Faith and reason are knitted together in the human soul. So don’t leave home without either one."

President George W. Bush (L) and White House Press Secretary Tony Snow return from an event at the Quantico Marine Base to the White House in Washington, September 14, 2007. Snow, who battled colon cancer, has died.
CHESAPEAKE, VA (Catholic Online) – Tony Snow, whose Catholic faith, superb communication skills, and work ethic propelled him to prominence in the world of media, journalism and communications, has died after his courageous battle with colon cancer.

Honored by the Catholic University of America in May of 2007, Tony Snow gave the crowd which gathered for the 118th Annual Commencement Address: "Reason, Faith, and Vocation" much to ponder.

The title summed up his efforts to integrate his faith, his commitment to marriage and family, his political and policy convictions and a career of communications.

It was also characteristically blunt and practical while rising at times to the level of inspired insight. That was Tony Snow’s gift of communications. He used it throughout a career which was accompanied by earning the respect of his peers, even if they disagreed with his positions.

Robert Anthony “Tony” Snow was born on June 1, 1955. He earned a bachelors degree in philosophy and taught in Kenya before deciding on a career as a journalist. He married his beloved wife, Jill Ellen Walker in 1987 and they have three children, Robbie, Kendell and Christie.

Probably known most nationally for the last assignment of a memorable journalistic career, his brief stint as White House Press Secretary, Tony Snow has been a fixture in “conservative” politics and policy circles for many years.

He was a very popular syndicated columnist, an editor, one of the most popular personalities on the Fox television network, where he anchored “Fox News Sunday” and a radio host. His career spanned thirty years.

The President of the United States, George Bush, released a statement on Snow’s death in which he said: "Laura and I are deeply saddened by the death of our dear friend, Tony Snow. The Snow family has lost a beloved husband and father. And America has lost a devoted public servant and a man of character."

As tributes to this fine man pour in from all over the world, Catholic Online offers our prayers to his family and our deepest condolences on their loss. Tony Snow’s heroism in fighting cancer was another sign of the character which informed his stellar career as well as his commitment to family.

In his address to the graduates of Catholic University he spoke these words:

“Heed the counsel of your elders, including your parents. I guarantee you, they have made some howling mistakes if, like me, they were in college in the ’70s and ’80s. They probably haven’t owned up to them, but they might now, because they want to protect you. You see, they know that you are leaving the nest. And now that you’re leaving the nest, predators soon will begin to circle."

"Some are going to try to take your money, but the really clever ones are going to tempt you to throw your life away. They’ll appeal to your pride and vanity – or worse, to your moral ambition. After all, there’s nothing more subversive than the offer to become a saint. So think things through."

"Be patient. If somebody tries to give you a hard sell, you know they’re peddling snake oil; don’t buy it. If something’s not worth pondering, it is certainly not worth doing. And if your gut tells you something’s fishy, trust your gut."

"You know, hucksters perform an unintended service. Like everybody here, I’m sure you’ve all been conned. I am such a sucker that I get conned all the time. What happens is they make you look in the mirror and assess honestly the person on the other side."

"Now all of us love to delude ourselves, making excuses. But you know, the more we resist being honest and doing an honest evaluation, the sillier we behave. If you don’t believe it, think of any swinger you have ever seen in your life. Socrates was right: Know thyself."

"But see, there’s more. Once you’ve gotten past the mirror phase, then things begin to get really interesting. You begin to confront the truly overwhelming question: Why am I here? And that begins to open up the whole universe, because it impels you to think like the child staring out at the starry night: “Who put the lights in the sky? Who put me here? Why?”

"And pretty soon you are thinking about God. Don’t shrink from pondering God’s role in the universe or Christ’s. You see, it’s trendy to reject religious reflection as a grave offense against decency. That’s not only cowardly. That’s false. Faith and reason are knitted together in the human soul. So don’t leave home without either one. ..."

"Think not only of what it means to love but what it means to be loved. I have a lot of experience with that. Since the news that I have cancer again, I have heard from thousands and thousands of people and I have been the subject of untold prayers. I’m telling you right now: You’re young [and you feel] bullet-proof and invincible."

"[But] never underestimate the power of other people’s love and prayer. They have incredible power. It’s as if I’ve been carried on the shoulders of an entire army. And they had made me weightless. The soldiers in the army just wanted to do a nice thing for somebody. As I mentioned, a lot of people — everybody out here — wants to do that same thing.”

The manner and the message showed the mettle of the man.

In that address he also spoke of his sincere faith:

“When it comes to faith, I’ve taken my own journey. You will have to take your own. But here’s what I know. Faith is as natural as the air we breathe. Religion is not an opiate, just the opposite. It is the introduction to the ultimate extreme sport. There is nothing that you can imagine that God cannot trump.

As Paul said “Faith is the substance of things hoped for, the evidence of things not seen.” And once you realize that there is something greater than you out there, and then you have to decide, “Do I acknowledge it and do I act upon it?” You have to at some point surrender yourself. And there is nothing worthwhile in your life that will not at some point require an act of submission.”

We join our prayers to those of his family, friends and colleagues the world over:

“Eternal Rest grant unto him Oh Lord, and may his soul and the souls of the faithful departed rest in peace, Amen”
Posted by jtf at 10:07 PM