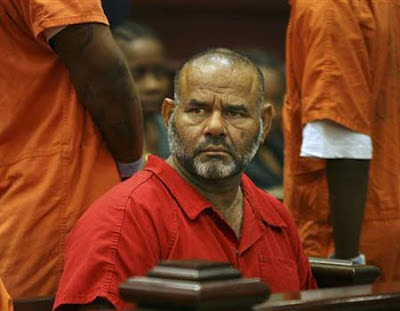 AP
July 7: Chaudhry Rashid waits with other inmates to make his first appearance in Magistrate Court at the Clayton County Courthouse in Jonesboro, Ga.

Last Sunday Chaudhry Rashid, a Pakistani immigrant living in Clayton County, Georgia, strangled his daughter to death. According to police, Rashid explained to them that he had killed his daughter, Sandeela Kanwal, in order to restore his family’s honor, which she had sullied by planning to divorce the husband to whom she had been given in an arranged marriage. Clayton County Police spokesman Tim Owens explained: “Apparently she and the father had argued over the marriage and the fact that it was arranged, and at some point during the altercation he did end up killing his daughter.”

The family appears to have adhered to traditional Islamic mores. A neighbor noted: “I would see the young lady outside every once in a while dressed in the traditional Muslim gear.” Added another: “The father, he would pray at certain times of the mornings and evenings.” And indeed, honor killing most commonly occurs among Muslims. While there is no direct sanction given in the Qur’an or Islamic law for it, the practice is encouraged by the shame/honor culture that Islam has created. A transgression of the moral law is not seen only as a sin to be somehow expiated by the individual who committed it, but as a blot upon the honor and purity of the family of the victim – and that blot inheres in the sullied purity of the victim, not the perpetrator.

“Honor killings” are distressingly common throughout the Muslim world. Phyllis Chesler reports that “in 1997, in Cairo Egypt, twenty-five-year-old Nora Marzouk Ahmed’s honeymoon ended when her father chopped off her head and carried it down the street. ‘Now,’ he said, ‘the family has regained its honor.’ Nora’s crime? She had eloped.” And “in 2002, in Tehran, an Iranian man cut off his seven-year-old daughter’s head after suspecting she had been raped by her uncle. ‘The motive behind the killing was to defend my honor, fame, and dignity.’ Some people called for this man’s death under Islamic law, but ironically, only the father of the victim can demand the death sentence.”

Chesler recounts many such killings. “In 1999, in Lahore, Pakistan, Samia Imran was shot dead in her feminist lawyer’s office by a man whom her parents had hired to kill her. Her crime? Seeking a divorce….In 2001, in Gujar Khan, Pakistan, Zahida Perveen’s husband attacked her, gouged out both her eyes, her nose, and her ears. He wrongly suspected her of adultery. He was arrested, but male relatives shook his hand and men decided she ‘must have deserved it’ and that a ‘husband has to do what a man has to do.’…In 2005, in Gaza, five masked members of Hamas…shot Yusra Azzumi, a twenty-year-old Palestinian woman, to death, brutalized her corpse, and savagely beat both her brother, Rami, and her fiancé, Ziad Zaranda, whom she was to marry within days. This self-appointed Morality Squad wrongly suspected Yusra (herself a Hamas member) of “immoral behavior.”

Islamic clerics are partially responsible for the strong association of this practice with Islam. One notorious example of this association came in the relatively moderate Muslim country of Jordan in 2003, when the Jordanian Parliament voted down a provision designed to stiffen penalties for honor killings. Al-Jazeera reported with unintentional irony that increasing penalties for honor killings would destroy families: “Islamists and conservatives said the laws violated religious traditions and would destroy families and values.”

Ignoring the clear and close link between of honor killing and Islamic culture, however, the mainstream media searched for explanations elsewhere. CNN consulted Ajay Nair, associate dean of multicultural affairs at Columbia University, to see if honor killing was a “South Asian” problem. Certainly not, explained Nair: “My immediate reaction was that this is an anomaly in the South Asian community. This isn’t a rampant problem within South Asian communities. What is a problem, I think, is domestic violence, and that cuts across all communities.”

Also ignoring the incidence of honor killings in Jordan, Egypt, Iran, Gaza and elsewhere (including among Muslim immigrants in Germany, Britain, Canada, and Texas), the Chicago Tribune attributed it to the cultural rigidity of Pakistani and Indian immigrants, and even dragged in the crowned heads of Europe: “Such cultural unions serve as social contracts among South Asians and other communities, where a marriage agreement is more about families joining forces than about two people finding love—akin to the arranged marriages of European royalty…”

To this Warner Todd Huston of NewsBusters trenchantly responded: “Last I checked my history books common Europeans didn’t go around killing their daughters for marrying ‘wrong’ and neither did their ages old Monarchs.”

In line with the widespread acceptance of this practice in Islamic culture, when he appeared before a judge, Chaudhry Rashid insisted: “I have done nothing wrong.” Speaking to the judge, he demanded prison food prepared according to Islamic requirements, and declared that he would refuse pork in any form. It was a clear indication of the strength of his commitment to Islam, even as the mainstream media remained determined not to notice any such commitment.

The price of this politically correct refusal to confront the ugly realities of the Islamic link to honor killing will be, quite simply, more honor killings. No one will call upon Islamic groups to do something about this practice. No special scrutiny will be focused upon Muslims in the United States, or any studies undertaken about how honor killings can be prevented. No one will examine the question of unrestricted Muslim immigration in light of this problem. While learned analysts search for clues in South Asian cultural habits and the practices of European royalty, more young women will be murdered by their Muslim fathers, husbands, and brothers to cleanse their family’s honor. These young women are the ultimate victims of political correctness.

- Robert Spencer is a scholar of Islamic history, theology, and law and the director of Jihad Watch. He is the author of seven books, eight monographs, and hundreds of articles about jihad and Islamic terrorism, including the New York Times Bestsellers The Politically Incorrect Guide to Islam (and the Crusades) and The Truth About Muhammad. His next book, Stealth Jihad: How Radical Islam is Subverting America without Guns or Bombs, is coming this November from Regnery Publishing.