Why GOP is Losing the Working Class 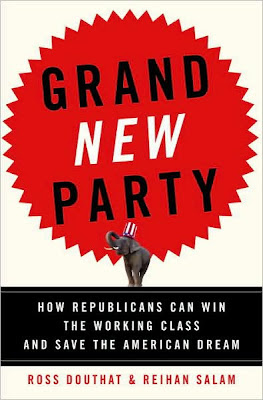 In her 2001 memoir of seminary life, Episcopal priest Chloe Breyer expressed befuddlement that the Rikers Island inmates to whom she was ministering mocked her liberal approach to religion.

"They want answers, not questions," Ms. Breyer wrote in frustration. "The more contradictions I point out in the Bible, the more the inmates decide there is no point in wasting their time with a religion that lacks answers."

Can you blame them? The poor and working class tend to prefer non-squishy religion prescribing a stark moral code - even if they struggle to live up to its demands. It's not hard to see why. Unlike Ms. Breyer, whose father is a Supreme Court justice, and other social elites, folks living nearer the economic margins have far more to lose from individual and communal moral failure.

A Mexican immigrant housekeeper whose husband works on the road told me that her Pentecostal congregation in Dallas is the only thing she has to help her keep her teenage girls on a path to a stable future. Given the skyrocketing teen pregnancy rate among Latinas, you can see why a mother like this housekeeper gravitates toward Pentecostalism, not liberal Protestantism or laissez-faire Catholicism.

This innate cultural conservatism partly explains why the white working classes have voted Republican over the past generation (and why blacks, despite being reliably Democratic in their voting habits, are fairly conservative in their social views). Democrats see these Republican voters as closet racists at worst or, at best, dupes of Republican wedge politics.

This is condescending and mostly wrong. In fact, when you fear a loss of control over your future, identifying with culturally conservative candidates is a reasonable response.

Elites look at working-class anxiety over illegal immigration and see only nativism. What elites don't, or won't, see is that the working classes are pressed harder by the presence of illegal immigrants, in ways that typically don't affect academics, media types or affluent suburbanites.

Cultural issues have played a paramount role in American party politics since the late 1960s and have been a key determinant in voting (on the left and the right) during the long Reagan and post-Reagan economic boom. But now, with the nation facing what some economists warn is its worst fiscal crisis since the Great Depression, that may change. And Republicans have no idea what to do about it.

In their thoughtful and important new book, Grand New Party: How Republicans Can Win the Working Class and Save the American Dream, young conservative journalists Ross Douthat and Reihan Salam point out that while Democrats are clueless about why cultural values can produce material suffering, Republicans fail to grasp how economics can affect cultural decline.

Liberals correctly call out conservatives, they write, for "diagnosing the working class' cultural problems and then pretending that those problems are the only ones there are."

"In reality, you can't disentangle the sociological trends that have created familial instability from the economic trends, at home and worldwide, that have increased financial insecurity for working-class voters," they continue. "Divorce and illegitimacy lead to economic disadvantage, but the reverse is also true."

Mr. Douthat and Mr. Salam, two of the brightest comers in the next generation of conservative public intellectuals, offer policy proposals designed to appeal to working-class voters by shoring up families and addressing economic insecurity (as distinct from economic inequality).

They show that the most reliable Republican voters are actually more socially conservative, suspicious of big business and favor a larger government role in helping families manage economic risk than the GOP's stale rhetoric would allow.

Mike Huckabee's surprising success in the GOP primaries, to say nothing of Barack Obama's skill in peeling away some conservatives by feinting rightward on culture and religion, suggests an emerging centrist constituency that's culturally conservative but economically liberal.

What does the Republican Party have to offer these voters? The tried-and-true tax-cut litany is as stale as anything Walter Mondale had to say in 1984. Free-market clichés may suit GOP money men and radio talkers, but they do not satisfy working-class voters for whom the changing economic order undermines family stability.

Though Grand New Party doesn't provide all the answers, it asks the right questions. After this fall's election results, the shell- shocked Republican leadership will be catching up to Mr. Douthat and Mr. Salam, who are pioneering tomorrow's conservatism today.

Rod Dreher is a Dallas Morning News editorial columnist. His e-mail address is rdreher@dallasnews.com.
Posted by jtf at 6:29 PM