Until the very end, Bobby Murcer showed 'heart of a champion' 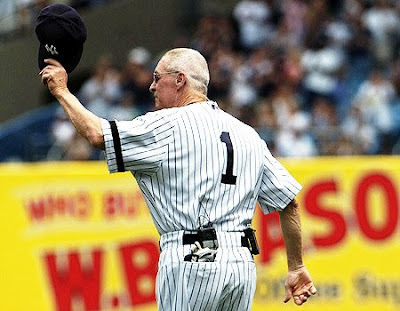 Bobby Murcer lost his gallant and determined fight with brain cancer Saturday at Oklahoma City Hospital with his wife, Kay, his daughter, Tori, and his son, Todd, by his side, a little more than a year-and-half after first being diagnosed with the most aggressive form of tumors. He was 62, and while most of those last 19 months of a life-too-short were spent enduring exhaustive, often-agonizing after-effects of intense chemotherapy and radiation, Murcer, true to his upbeat nature, regarded them as a blessing rather than a curse.

"I feel especially blessed," he told me a few months ago, "to have been able to hear from and see all these wonderful people who have been my fans. Through this entire ordeal, their prayers and support have been so gratifying. You have no idea what a strength the fans have been for me."

According to his literary agent, Rob Wilson, Murcer was especially grateful to have been able to write his book, "Yankee For Life," in which he shared his life's experiences, from the trial of how he and his wife, Kay, dealt with the devastating news of his malignant brain tumor on Christmas Eve 2006, to the joy of his 44 years in the game as a player and broadcaster. During his last appearance in New York, May 27-29, Murcer, though frail and physically weakened, pushed himself to accommodate nearly 2,000 fans in three separate book signings.

"He displayed the heart of a champion throughout all those signings," said Wilson. "I don't know how he was able to get through them. No matter how weak he felt, he just kept signing. I told him at one point, 'We can cut this short, Bobby,' but he insisted on going the full nine innings. There was so much love on those lines, all those people who wanted to share their stories with him, and I think that was what motivated him to keep on going. He wanted them to know he loved them as much as they loved him." 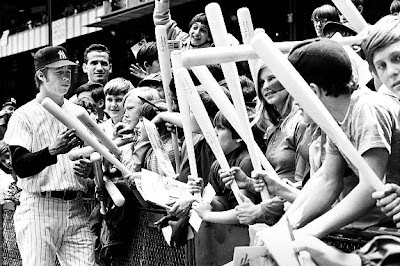 He first came to us in 1966 out the same rolling hills of Oklahoma as his boyhood idol, Mickey Mantle, and with the same lofty expectations. But while that, too, might have been considered a curse for most any other ballplayer, Murcer - who like Mantle was signed by the legendary Yankee scout Tom Greenwade, and began his professional career as a shortstop before shifting to center field - felt honored to be compared with the great Yankee slugger.

Such was Murcer's wry and self-effacing humor. But he was proud of all he accomplished as a player; especially proud of what he'd meant to a generation of Yankee fans in the mid-'60s and early '70s, who never knew the championship Yankee tradition. For a lot of those years, he was about all the Yankees had, a lonely pinstriped All-Star who came back from a two-year stint in military service to hit 129 homers in his first five full seasons. He would finish his career with a .277 average, 252 homers, 1,862 hits and a .445 slugging percentage - maybe not Mantle-esque, but more than enough to stamp him as a pretty fair country ballplayer. And, combined with his 22 years in the broadcasting booth, he earned Yankee icon status as one of the last to be introduced on Old-Timer's Day.

That's all he ever wanted to be - a respected Yankee. It was his fate, however, to never play on a Yankee world championship team. He arrived on the scene just after the 1949-64 Yankee dynasty had come to an end, and was traded - to the San Francisco Giants on Oct. 21, 1974, for Bobby Bonds - right before George Steinbrenner restored the team to a new championship era. Many years later, Murcer still called the trade to the Giants "the worst day of my life" but always blamed Yankee general manager Gabe Paul rather than Steinbrenner, who was serving his first suspension from baseball. 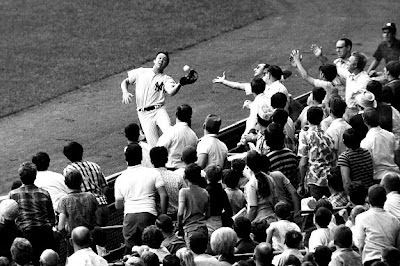 Murcer loses his cap as he makes a spectacular snare of a foul ball hit by Sal Bando during a game against the A's on Aug. 10, 1969.
Credits: News

"Gabe and I always had a personality conflict," he once told me. "I was not a pro-Gabe Paul person. Gabe was only interested, in my opinion, in a team looking good and the budget being held down. He was satisfied with mediocrity."

Nevertheless, the Murcer-for-Bonds deal later became regarded as the pivotal transaction in the building of a new championship Yankee legacy when, a year later, Paul traded Bonds to the California Angels for pitcher Ed Figueroa and center fielder Mickey Rivers, both of whom were key components on the teams that won three straight American League pennants from 1976-78, and back-to-back World Series in '77 and '78. In the year prior to the trade, Murcer was dealt a double-barreled blow to his pride and his status as the premier Yankee: With Yankee Stadium undergoing its renovation, the team moved to Shea Stadium in 1974 and Murcer, who had the perfect lefthanded power stroke for Yankee Stadium, suffered accordingly, his home run output dropping to 10, with only two of them hit at home. At the same time, Yankee manager Bill Virdon determined that Elliott Maddox, whom the Yankees had purchased for $35,000 from the Texas Rangers in spring training '74, was a more adept center fielder, and Murcer was moved to right, never to return.

Murcer would go on to spend the next 41/2 years in Yankee exile, watching with envy from second-division outposts - Candlestick Park and Wrigley Field - as his old team, fortified with Hall-of-Fame-bound free agents Reggie Jackson, Catfish Hunter and Goose Gossage, along with his best friend, Thurman Munson, made regular trips to the World Series.

It wasn't until late June of 1979 that Steinbrenner reunited the 33-year-old Murcer with the Yankees, as the Cubs, who were just looking to dump his $320,000 contract, sent him back to the Bronx for a non-prospect minor league pitcher named Paul Semall. At the time of the deal, the Yankees, who had lost their closer, Gossage, to a thumb injury (the result of a shower room fight with teammate Cliff Johnson) were already falling out of the AL East pennant race. Then, on Aug. 2, an off-day, the Yankees and the rest of baseball were shocked by the news that Munson had been killed in the crash of his single engine private jet as he was practicing landings at the Canton, Ohio, airport.

No one in baseball was closer to Munson than Murcer, who, only the night before, had watched from his car at the end of the runway of a small Chicago airport as Munson took off on his solo flight home to Canton. Four days later, after delivering the eulogy at the Munson funeral in Canton, Murcer, despite having gotten no sleep, implored Yankee manager Billy Martin to let him play in the game that night at the Stadium against the Baltimore Orioles. It would be his finest hour as a Yankee as he honored Munson's memory by driving in all five runs, with a three-run homer and two-run single, in their emotional 5-4 win. 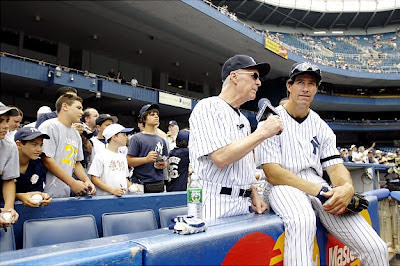 "He loved the game, his fans, his friends, and most of all his family," Murcer had said in the eulogy for Munson. "He is lost, but not gone. He will be missed, but not forgotten."

Now they are both lost.

Bobby Murcer was a pal and I will always choose to remember him, not so much for his exploits on the ballfield, but rather for his humor and humanity off it. A prime example of that latter quality was his service as president of the Baseball Assistance Team, the organization that raises money for indigent former players and baseball front office personnel. "Bobby lending his presence to our organization was so important in raising the awareness among the current players of what we do," said BAT executive director Jim Martin. "With him, it was never about Bobby and all about helping people in need."

One of my everlasting memories was a night in Boston in 1982. Bobby was at the tail-end of his career - on "scholarship" as I would tell him, in reference to the three-year "thanks for the memories" contract Steinbrenner bestowed upon him - and we were walking back to the hotel after having a few postgame cocktails at one of Boston's popular saloons. This was also when he was a spokesman for Skoal chewing tobacco and had actually recorded a goofy song, "Skoal Dippin' Man", for them. Regretfully, he also really chewed the stuff for a few years.

"I've always wanted to write my life story," Bobby said to me, "but I may need your help. Do you want to hear it?"

"Well, yeah. When we get back to the room, I'll tell you everything." 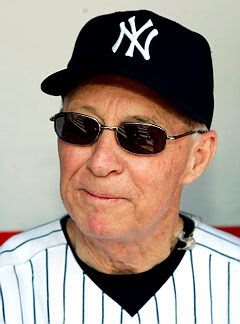 McIsaac/Getty
Murcer leaves behind his wife, Kay, and two children, Todd and Tori

Sure enough, when we got back to the hotel, Bobby doggedly followed me up to my room and as I stretched out on the bed, he pulled up a chair and a waste basket for which to deposit his "chew" spittle. I don't remember much of his monologue, other than feeling myself dozing off when, a half hour into his life story, he was only at Greensboro of the Carolina League.

The next day at the ballpark, he approached me in consternation.

"I can't believe you fell asleep in the middle of my life story!" he exclaimed.

"I can't believe you left that mess in my waste basket and that I'm probably gonna get charged for it!" I countered.

It turned out Bobby Murcer did have quite a life story. It was actually a love story that began and ended with the beautiful Kay, his high school sweetheart, and their two kids, Todd and Tori, who all survive him. And in between were all the rest of us, his friends, teammates and just plain fans, who will miss him and never forget him.
Posted by jtf at 11:17 PM

I'm terribly saddened regarding the passing of Bobby Murcer. My thoughts go out to his wife, children and grandchildren. In my eyes he was a true hero. I always admired the way he conducted himself whether it be on the field of play, the broadcast booth and interacting with his fans. Bobby faced his demise with courage and calm and dignity. The adage that "the good die young" applies here in losing Bobby. His smile, sense of humor and dignity will be missed.