Dancing on the grave of Jesse Helms 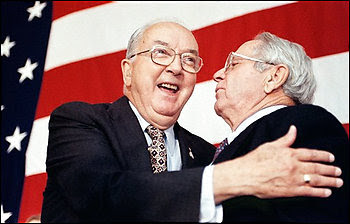 LIBERALS DIDN'T think much of Jesse Helms when he was alive, and their feelings didn't soften with his death.

"Jesse Helms, you rat bastard, burn in hell," announced a headline at Daily Kos, the hugely popular left-wing blog; "Please excuse me while I dance upon his grave," gloated another.

The invective streamed in from across the pond as well. "There seemingly wasn't a right-wing, retrograde social issue Helms met that he didn't like," wrote Melissa McEwan in a savage essay on the Guardian's website. "It was . . . his unmitigated intolerance toward people of color that will define his legacy.

Well, hating Helms is nothing new. More than 16 years ago, the scholar Charles Horner observed in Commentary that for many people Helms had become a "symbol of the evil against which all enlightened people are automatically ranged." As with the poisonous rhetoric of today's pathological George W. Bush-haters, the point of the virulence expressed toward Helms was typically character-assassination, not contention - it was aimed at demonizing the man rather than debating or disproving his ideas.

For some liberals, Helms's death had long been a fantasy. "I think he ought to be worried about what's going on in the Good Lord's mind," NPR's Nina Totenberg said in 1995, "because if there is retributive justice, he'll get AIDS from a transfusion. Or one of his grandchildren will get it."

What the left despised most about Helms varied with the seasons. There was his unyielding anticommunism. His visceral opposition to homosexuality. His war on government funding of obscene art. His blackball of William Weld's nomination as ambassador to Mexico. His staunch support of the tobacco industry. And, of course his segregationist past.

In the one-dimensional demonology of the left, Helms comes across as an unreconstructed racist who dreamed of Jim Crow every night and whose first words each morning were "Segregation forever!" The truth was considerably different - and more admirable.

Helms came to prominence as a foe of desegregation. "He battled as hard as any of them," editorialized the conservative National Review in 2001, "a shameful legacy, of which he was never ashamed." In those days Helms was a Democrat, as were most Southern segregationists. But by the time he entered Congress in 1973, he had changed both his party and his mind. Far from using his office to roll back civil rights, argued Walter Russell Mead, a noted scholar at the Council on Foreign Relations, Helms "deserves to be remembered as one of a handful of men who brought white Southern conservatives into a new era of race relations."

Mead, who grew up in the South, recalled listening as a boy to Helms's "anti-integration, anti-Martin Luther King commentaries on WRAL-TV." But once the battle was over and the civil rights laws were passed, Mead wrote years later, Helms did something "very revolutionary for Southern white populists: He accepted the laws and obeyed them." He shunned violence, hired black aides, and provided constituent services without regard to race. Instead of leading his followers into resistance, Helms "disciplined and tamed the segregationist South," prodding it "into grudging acceptance of the new racial order."

Yet rather than hail his statesmanship and acknowledge his contribution to the civil rights revolution, liberals marked his death by reaching for pejoratives. Helms's sin was not racism; it was his tenacious political incorrectness. Had he been willing to tack left on other issues, his racial wrongs would have been forgiven.

Consider, for example, the treatment meted out to Helms's senior colleague, Sam Ervin. He was beloved by the left notwithstanding his defense of segregation and his vote against elevating Thurgood Marshall to the Supreme Court. When Ervin died, The Washington Post's front-page obituary began by saluting him as a "hero to many" for his role in the Watergate hearings. His opposition to nearly every civil-rights bill of his career wasn't mentioned until the 24th paragraph - of a 25-paragraph obituary.

The real Jesse Helms was never the cartoon villain his enemies so loved to hate. But then, he didn't much care what they thought while he was alive. He certainly doesn't care now.

Jeff Jacoby can be reached at jacoby@globe.com.
Posted by jtf at 6:28 AM