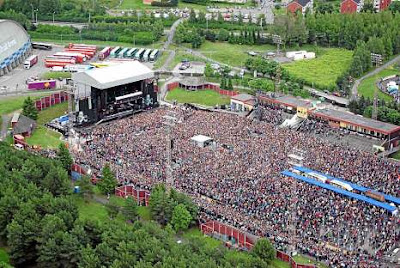 The 40,000 fans who packed Oslo's Valle Hovin stadium Monday night didn't seem to care that it was cold and damp outdoors. The man they came to see, legendary rocker Bruce Springsteen, delivered a concert that was fabulous by most accounts, and warmed up everyone.

Some fans braved cold rain to start lining up outside the stadium early Monday morning, in the hopes of getting the best spots near the stage. The concert had sold out in a matter of minutes when tickets went on sales months ago, and a second concert was scheduled for Tuesday night. It was sold out as well. 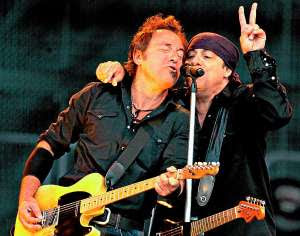 "The Boss" was back in Oslo, and delivered a concert (here with Little Steven) that won top marks from critics and fans alike.
PHOTO: MAGNUS KNUTSEN BJØRKE

Diehard fans Terje Bergan and Roar Bakken had come straight from Springsteen's concert in Stockholm. They hadn't reckoned with all the early arrivals, so hopes of getting spots near the stage faded quickly.

It didn't seem to matter. Bakken, president of Springsteen's Norwegian fan club "Blood Brothers," looked forward to the concert anyway, since a new line-up of music was likely. "The thing that's so exciting with this concert tour is that he changes 16 or 17 of the songs from concert to concert," said Bakken, who figured out that Monday night's event was the 30th time he'd been in Springsteen's audience. 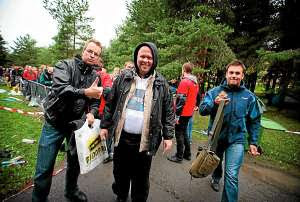 Few were happier when it was all over than Lena Milde, age 47, and her daughter Mia, 18. They'd fitted themselves out with a sign asking for a kiss, and they both got one.

"It was just incredible, it went so fast," said Lena. Springsteen had spotted their sign, climbed down from the stage and kissed both of them.

"Suddenly he was just standing there," marveled Lena, who's been a Springsteen fan since the early 1980s. "It was unreal. Great fun."

The entire concert turned into what the Norwegians affectionately call a folkefest, literally a "peoples' party." From his opening hit "Two Hearts," through "Hungry Heart," "The River," "Born to Run" and "American Land" some 30 songs later, Springsteen absolutely thrilled the crowd. Lena and Mia Milde got their request filled, much to their own amazement.
PHOTO: HANS O. TORGERSEN

As one critic wrote in Aftenposten, "In Bruce Springsteen's world, the term spilleglede (joy of playing) takes on a whole new meaning..." Springsteen was described as "a storyteller, a charmer, a comrade and the successful boy-next-door," all at once.

Commenting on the sheer energy of a man approaching 60, Springsteen was described as, "put simply, quite special."

Another 40,000 or so fans could look forward to Tuesday night's concert back at Valle Hovin. And the sun was even shining. 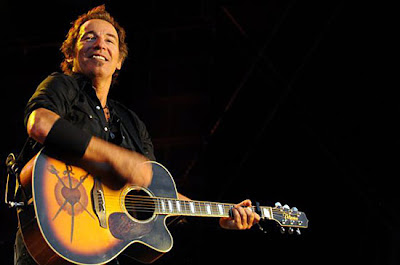 Night
Out in the Street
Radio Nowhere
Adam Raised a Cain
Spirit in the Night
Growin' Up
You Can Look (But You Better Not Touch)
The Promised Land
If I Should Fall Behind
I’ll Work for Your Love
Roulette
Trapped
Murder Incorporated
Working on the Highway
Livin' in the Future
Mary's Place
Waitin' on a Sunny Day
From Small Things (Big Things One Day Come)
The Rising
Born in the U.S.A.
Last to Die
Long Walk Home
Badlands
* * *
Girls in Their Summer Clothes
Hungry Heart
Thunder Road
Born to Run
Bobby Jean
American Land
Twist and Shout
Posted by jtf at 7:56 PM