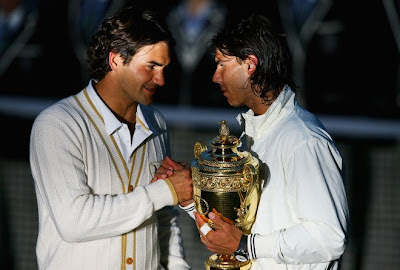 LONDON - JULY 06: Roger Federer of Switzerland congratulates Rafael Nadal of Spain in winning the Championship trophy during the men's singles Final on day thirteen of the Wimbledon Lawn Tennis Championships at the All England Lawn Tennis and Croquet Club on July 6, 2008 in London, England. (Photo by Julian Finney/Getty Images)

Sometimes, thankfully, we are given opportunities to pause, drop everything and melt in the scorched earth. No matter where you were and what you were doing Sunday, the TV screen was a magnet, and the epic grip of sport had seized your being. We won't experience 10 or 12 greater athletic moments in our lives than the Wimbledon men's final, which was so epic in its intensity and attrition that it trivialized the concept of a mere Instant Classic.

How about Eternal Gratification? Or Better Than Sex?

After four hours and 48 minutes of majesty, when Roger Federer dumped his final forehand into the net and Rafael Nadal tumbled joyfully across the Centre Court grass that Federer no longer rules, I heard applause all around me. Which was strange because the setting was a sports joint inside O'Hare International Airport. The Cubs were playing on Channel 9. The White Sox were playing on Comcast SportsNet. Our parochial city was buzzing about why seven Cubs and only two Sox had made the All-Star Game. Cubdom was crying about C.C. Sabathia heading to the rival Brewers. Yet I looked around to see two guys in Cubs caps and one in a Sox cap staring up at the screens and smiling as Nadal, climbing like Spider-Man through the tooty-snooty stands of the All England Club, hugged his loved ones and waved the yellow-and-red flag of his native Spain.

All eight TV screens were tuned to the match, too, as they'd been for hours.

"This is much bigger than the baseball games," the manager told me. "No one has complained." The only person who had a beef of any sort was a waiter, who asked me why I wrote such a tough column this year about Cubs prospect Felix Pie. I told him to find the column -- it doesn't exist because I never wrote it -- and to, um, please excuse me so I could absorb history with my Sprite.

The game was tennis, never taken seriously by the Grabowski crowd. But for all we knew, these could have been two barbarians -- football players, boxers, mixed-martial-arts goons -- as they wailed away on each other.

Including two rain delays, the match actually encompassed around 6 hours of real time, a mood-swing marathon in which young Nadal won the first two sets in a white, sleeveless, Capri-like get-up that reflects his brawling style and highlights two guns that would rival any strong safety's. This was what we¹ve been waiting for, the child of clay to challenge the grass dynasty of the stately Federer, and who knew it would evolve in one afternoon into the most crackling rivalry in sports? 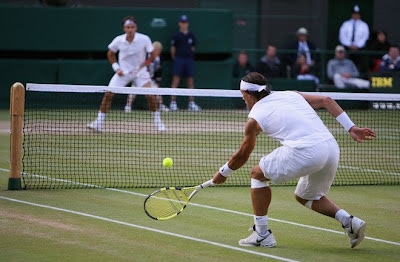 LONDON - JULY 06: Rafael Nadal of Spain plays a forehand during the men's singles Final match against Roger Federer of Switzerland on day thirteen of the Wimbledon Lawn Tennis Championships at the All England Lawn Tennis and Croquet Club on July 6, 2008 in London, England. (Photo by Lewis Whyld-Pool/Getty Images)

Nadal is what Phil Mickelson never became in a golf world owned by Tiger Woods. He is the lefty challenger who stared down Federer's 65-match winning streak on grass, which spanned five consecutive Wimbledon championships, and interrupted his reign as the sport's top player. With 12 Grand Slam titles, Federer has been making his case as tennis' all-time greatest player, yet is it possible his place in history will be swallowed up by Nadal? Already generally regarded as the most dominant ever on clay, he has mastered the grass game quicker than anyone imagined, becoming the first player since Bjorn Borg in 1980 to pull off the Wimbledon/French Open double in the same year. To see him hold off the charging Federer repeatedly in a mesmerizing fifth set, which trickled deep into the London twilight, ranks as high as any drama ever produced by tennis.

Yes, the same McEnroe who played in what previously was viewed as the greatest match ever, the 1980 Wimbledon final won by Borg in five sets.

What made it such a colossus in time was the toppling of a champion. Had Federer become the first male player since 1927 to return from a two-set hole and win the Wimbledon final, we would have hailed it as the crowning moment of his legacy and counted the days until he passes Pete Sampras' record of 14 Grand Slam wins. Now, all eyes turn to Nadal, who might be emerging as the greatest of them all at 22. To call it a changing of the guard, right there in the midst of English royalty, wouldn't be a stretch as much as probable reality. The enduring scene -- Nadal rolling on the sod and dirtying his shirt in euphoria, then scaling the TV commentators' booth with tears in his eyes to greet all of his family members and Prince Felipe and Princess Letizia of Spain -- marks the beginning of a long association we'll have with Nadal.

"It's impossible to explain what I felt in that moment," he said after winning 6-4, 6-4, 6-7 (5), 6-7 (8), 9-7. "I'm just very happy to win this title. For me, it is a dream to play in this tournament on this court. But to win, I never imagined something like this." The result, in the longest Wimbledon men's final ever, shouldn't have shocked anyone who has studied Federer of late. His game has regressed this year, and nearing 27, he could be nearing the end of his blurry run. We've tried to group him with Woods as two impenetrable pillars. They've become friends and even did a razor commercial together, but make no mistake, Federer is not Woods because Woods doesn't have a Nadal in his crosshairs.

"Probably later in life, I'll go, 'That was a great match.' But right now, it's not much of a feel-good thing," Federer said. "It's probably my hardest loss, by far. I mean, it's not much harder than this right now." The Swiss gentleman is more of a tennis throwback. His steady comportment falls more along traditional lines, right down to the classy sweaters that bear his initials. Nadal? He's a long-haired streetfighter who wears a large headband that covers his entire forehead and ties in the back. When he wins a point, he shouts instinctively and pumps his forearms, which are covered by huge wraps. But the clash of personalities and styles is what defines this rivalry and makes it fun and cool. They also are dignified and mature about the magnitude of it all, unlike some sports rivalries manufactured in America.

"I am very happy for me, but I'm sorry for him because he deserved this title, too," Nadal said. "He's still No. 1, still the best, still a five-time champion." "I tried everything. But Rafa's a deserving champion," Federer said. "He just played fantastically." Not only were they dueling each other, they were fighting the sky, the moon and the stars. By the end, it was dusk at Centre Court, where the players were engulfed by a roof that hangs over the stands. The fifth set couldn't have lasted more than another game before play would be suspended until today. Did we hear some snippiness from Federer over visibility issues at 9:15 p.m.? "It's rough on me now, to lose the biggest tournament in the world over maybe a bit of light," he said.

He wasn't the only one playing in near-darkness. "In the last game," Nadal said, "I didn't see nothing." But the challenger persevered as the champion expired. That's why we watch sports, of course, to see champs and challengers, and when they finally raise the level of drama high enough to cut through sport's scandals and smut, we tend to stop what we're doing and just gaze.

Even in Baseball City USA.
Posted by jtf at 5:27 AM