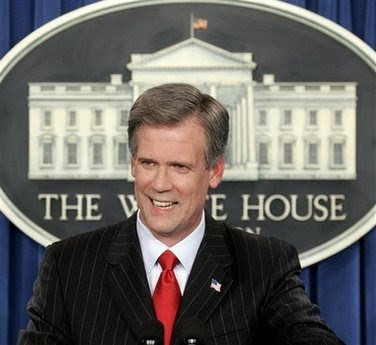 Tony Snow, 53, the former television and radio talk show host who became President Bush's chief spokesman and redefined the role of White House press secretary with his lively banter with reporters, died early this morning after losing a high-profile battle with cancer.

Snow was first diagnosed with colon cancer and treated in 2005, a year before joining the White House staff. But he discovered it had returned after an operation in March 2007 to remove what doctors thought was a benign growth in his lower abdomen. The cancer had spread to his liver, forcing Snow off the podium for treatment. Snow vowed to fight the disease and return to the briefing room but announced six months later that he was leaving his $168,000 job because he needed to recoup the income he lost when he left his job as a radio and television host. He later joined CNN as a commentator.

In as statement issued by the White House this morning, President Bush said, "Laura and I are deeply saddened by the death of our dear friend, Tony Snow. . . . Tony was one of our Nation's finest writers and commentators. He earned a loyal following with incisive radio and television broadcasts. He was a gifted speechwriter who served in my father's Administration. And I was thrilled when he agreed to return to the White House to serve as my Press Secretary. It was a joy to watch Tony at the podium each day. He brought wit, grace, and a great love of country to his work. . . .

"All of us here at the White House will miss Tony, as will the millions of Americans he inspired with his brave struggle against cancer."

In his brief tenure as the president's public advocate, Snow became perhaps the best-known face of the Bush administration after the president, vice president and secretary of state. Parlaying skills honed during years at Fox News, Snow offered a daily televised defense of the embattled president that was robust and at times even combative while still repairing strained relations with a press corps frustrated by years of rote talking points.

He was lively and entertaining, he could be disarmingly candid when ducking a question and he did not hesitate to retreat when it became clear he had gone too far. He could tell reporters to "zip it" one minute while defusing tension the next by admitting that he knew so little on a topic that he was "not going to fake it." He enjoyed the give-and-take of a tough briefing, but his smile, upbeat energy and glib repartee seemed to take the edge off sometimes rough rhetoric on behalf of a unpopular leader and unpopular policies.

When Bob Woodward of The Washington Post disclosed internal White House maneuvering to push out then-Defense Secretary Donald H. Rumsfeld, Snow tried to dismiss the account with a memorable putdown. "The book is sort of like cotton candy: It kind of melts on contact," he said. When a flamboyant radio reporter demanded to know whether Snow was going to evade a typically offbeat question, Snow chuckled. "No," he said, "I'm going to laugh at it."

In short, his was the first briefing for the talk show era, and he played the role with gusto. He loved nothing more than jousting with reporters at a televised briefing and expressed disappointment on days when they did not challenge him enough. To him, the job was the "Disney World of communications," as he once termed it. But at times, it seemed more about the theater than the information. He demonstrated little interest in the nitty-gritty of policy and delegated most off-camera reporter inquiries to his deputies. Precision was not his strong suit; translating difficult decisions into easily digestible explanations was.

Joining the White House as part of a staff shakeup in spring 2006, Snow quickly became a star among dispirited Republicans thirsty for an aggressive champion, the only press secretary in years routinely asked to sign autographs and pose for pictures while on the road. In a break with tradition -- and to some crossing a line too far into open partisanship -- the White House used him to headline Republican fundraisers. He also made the rounds of talk shows, hit the lecture circuit and even answered questions on a conservative Internet blog. 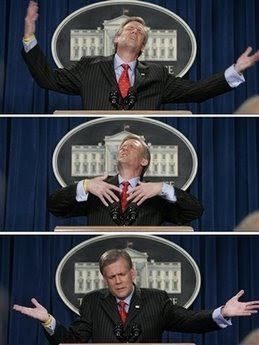 This three-picture combo shows White House Press Secretary Tony Snow reacting to a question during his daily briefing at the White House in Washington, in this Thursday, May 3, 2007 file photo.(AP Photo/Ron Edmonds, FILE)

Snow's freewheeling style took him too far on occasion. At one point, he said Bush believed that destroying embryonic stem cells was "murder." He later had to retract that, saying that he "overstepped my brief" and that the president would not use that term. Snow also apologized after initially seeming to brush off the seriousness of sexually explicit messages sent by then-Rep. Mark Foley (R-Fla.) to underage House pages by referring to them as "naughty e-mail."

And he occasionally let his passion draw him into personal exchanges with some reporters, such as when he accused NBC's David Gregory of expressing the "Democratic point of view" and "being rude." Gregory retorted: "Don't point your finger at me." Snow later called Gregory to apologize.

Snow leavened his tense tenure with humor and music. He made friends with the members of Jethro Tull and played flute, saxophone and backup guitar for his own band, called Beats Workin'. He appeared on National Public Radio's weekly humor show, "Wait, Wait . . . Don't Tell Me!"

From the beginning, Snow was open about his battles with cancer. His mother had died of colon cancer when he was in high school, and he suffered from colitis for 28 years. He frequently said he felt that he had been "stalked by cancer," and it finally struck him in February 2005 when a checkup found he had the same cancer that killed his mother.

Then a Fox News talk radio host, Snow opted for aggressive treatment, enduring two operations, six months of chemotherapy and the removal of his colon. When White House Chief of Staff Joshua B. Bolten asked him to replace Scott McClellan as press secretary in April 2006, Snow first got the endorsement of his doctor.

Cancer, Snow later said, was "the best thing that ever happened to me" because it brought him closer to his wife, Jill, and their three school-age children and made him appreciate what was really important in life. He became an evangelist for positive attitude and not letting cancer take over one's life. He constantly wore a yellow LiveStrong wristband popularized by Lance Armstrong and choked up at his first televised White House briefing when discussing his experiences, an emotional display he later jokingly called his "Ed Muskie moment."

Snow underwent frequent scans and checkups, and doctors found a growth in his abdomen in the winter of 2007. When they operated in March, they discovered that the cancer had returned and spread to his liver. Snow's deputy, Dana M. Perino, broke into tears as she announced the news. Snow returned to the White House podium five weeks later.

Robert Anthony Snow was born in Berea, Ky., and grew up in Cincinnati. His father was a teacher and assistant principal, and his mother an inner-city nurse. By Snow's description, his was a liberal, idealistic family that cared about poverty and race relations. In high school, Snow was president of the National Honor Society, a varsity tennis player and, not surprisingly, a member of the debate team.

He headed south to North Carolina to attend Davidson College, where he sported a beard and ponytail and was a self-described Marxist. But he grew disaffected with American liberalism before graduating with a philosophy degree in 1977. "We both came pretty much as McGovernites and left kind of Reaganites," a roommate said later.

Snow shuffled from job to job, first as a caseworker for the mentally ill in North Carolina, then as a teacher in Cincinnati and Kenya before doing some graduate work in economics and philosophy at the University of Chicago.

In 1979, he discovered journalism and never looked back. He started as an editorial writer for conservative editor Terry Eastland at the Greensboro Record in North Carolina, then followed Eastland to the Virginian-Pilot of Norfolk and eventually moved to the Daily Press of Newport News. In 1984, Snow became deputy editorial editor for the Detroit News, where he met and married the editor's secretary, Jill Walker. In 1987, the same year as the wedding, he became editorial page editor at the Washington Times.

President George H.W. Bush recruited him to the White House as a speechwriter, although infighting later relegated him to a backwater job in the media affairs office. After that, Snow wrote a syndicated column, as well as columns for USA Today and the Detroit News. He also branched out to broadcast, filling in for radio hosts Rush Limbaugh and Diane Rehm and doing commentary on National Public Radio, ABC's "Good Morning America" and CNN's "Late Edition." 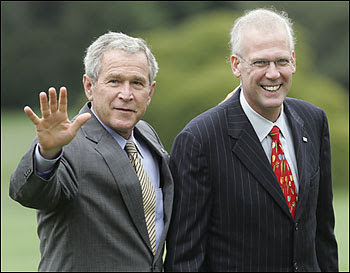 Roger Ailes, who met Snow in the Bush White House, hired him in 1996 to launch a Sunday show for the upstart Fox News Network. Snow made a national name for himself during the next seven years at the helm of "Fox News Sunday." He also played a bit part in the Monica Lewinsky scandal that nearly felled President Bill Clinton; he introduced a friend from the first Bush White House named Linda Tripp to book publisher Lucianne Goldberg, helping set in motion a chain of events that resulted in an investigation and impeachment.

After Snow was replaced at "Fox News Sunday" in 2003 by Chris Wallace, he launched his own Fox radio talk show, heard on 125 stations nationwide, and was sometimes tough on the second President Bush. In columns and on the air, Snow lambasted Bush as an "impotent" president with a "listless domestic policy" who had "lost control of the federal budget." At one point, Snow said, "George Bush has become something of an embarrassment."

When Bush announced Snow's appointment as press secretary, the president made reference to the past criticism. "I asked him about those comments," Bush told reporters, "and he said, 'You should have heard what I said about the other guy.' "

Yet as he laughed it off, Bush broke from his own pattern by inviting an outsider into what had been an unusually insular White House.

Snow is survived by his wife, Jill, and their three children, Kendall, Robbie, and Kristi.

Baker is a former Washington Post staff writer who covered the White House.
Posted by jtf at 12:25 PM