Beloved Yankee Remembered as an Example TORONTO — Bobby Murcer never played for a championship Yankees team. But like Don Mattingly, it made no difference to his legacy. Murcer was beloved by players for his good nature and revered as an embodiment of what the Yankees try to represent. He was competitive and classy, tough and tender, all at once.

“The way he handled himself,” Mariano Rivera said, “he was the best example we could have.”

The Yankees learned of Murcer’s death Saturday in the clubhouse at Rogers Centre, minutes after a victory. Suddenly the music stopped thumping through the speakers, and a celebration turned somber. One by one, players shared their memories of Murcer, who died of complications from brain cancer at age 62.

“Bobby always went out of his way to be nice,” Derek Jeter said. “He’s one of the most positive people you’d ever meet. Ever since I first came up, you always looked forward to seeing him.”

Jorge Posada would hang on Murcer’s stories about Mickey Mantle, a switch-hitter like Posada. He would ask Murcer about Thurman Munson, a predecessor as the team’s catcher. Murcer would talk — Oklahoma roots ever clear in his voice — and Posada understood his sincerity.

“A lot of stories from the heart,” Posada said. “He really meant everything he said. He was a big part of a great organization. He did a lot of good things for this team, and it’s a really sad day.”

Posada’s voice cracked, and he was not the only one who was emotional.
Jason Latimer, a Yankees’ media relations representative, learned the news from a cellphone call while Manager Joe Girardi was addressing reporters after the game. Girardi’s session ended, reporters left the manager’s office, and Latimer stayed behind to tell Girardi.

Girardi broadcast games with Murcer on YES last season and rooted for him in the 1970s, when Murcer played for the Chicago Cubs. When the door opened, Girardi sat hunched over at his desk chair, eyes red, nose sniffling. His voice broke as he called Murcer a great Yankee and a great friend.

“He was an inspiration to all of us,” Girardi said. “And I know he’s in heaven with the good Lord and he’s peaceful, but it’s hard when you lose somebody so special.”

Murcer, who was diagnosed as having cancer in 2006, was treated at the M. D. Anderson Cancer Center in Houston. Andy Pettitte, who lives in Houston, met him once for lunch. Like most of the players, Pettitte was aware of Murcer’s condition, but he was unprepared for Saturday’s news. 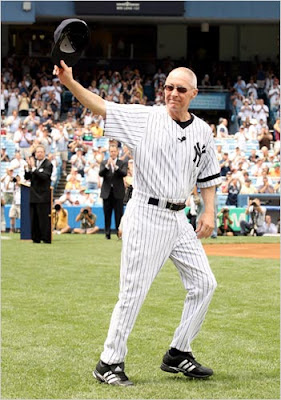 “Most of us are kind of blind-sided by it,” Pettitte said. “We didn’t know he was in such bad shape. He was just here — what, a month and a half ago? — and did a few games. I know he battled it for a long time. What a spirit he had.”

Pettitte and Jason Giambi remembered how Murcer would pat them on the back when they struggled. Murcer clowned with Giambi at Old-Timer’s Day, once showing up with a fake tattoo.

“He had that aura about him,” Giambi said. “He was always happy. You enjoyed being around him, because he was that type of guy that never seemed to have a bad day.”

Murcer also loved to talk about hitting, and as a fellow left-hander, he would tell Giambi about the adjustments needed to take advantage of the close right-field wall at Yankee Stadium.

Alex Rodriguez said Murcer often shared his simple philosophy — get a good pitch to hit — while making him feel at home.

“From the time I came over from Texas, he just treated me like I was a lifelong Yankee,” Rodriguez said.

In the clubhouse, the dean of the Yankees’ family is the trainer Gene Monahan. He started with the team as a spring-training intern in Fort Lauderdale, Fla., in the 1960s, when Murcer was also starting his career.
Monahan knew of the pressure on Murcer as an Oklahoma-born center fielder like Mantle. But Murcer carried himself with grace, Monahan said, learning how to act from the veterans and passing on the lessons.

“What stands out mostly is he was a gutty player with a lot of determination and strong will and a lot of love for his teammates,” Monahan said. “He was very kind and considerate, and he knew — because Mickey and all those guys took such great care of him in the ’60s when he came along and was highly touted — he knew that was the way to go with the young guys when they were coming up, even if you were the athletic trainer.

“He was always that way with the young kids, always took time out with them, always put his arm around them and explained things to them, even things as simple as how to dress, how to act on road trips, how to treat the clubhouse guys, how to be kind to the cab drivers and bus drivers, people who were out there to serve you, what it meant to be a big leaguer.”

Monahan was there for the ultimate example of Murcer as a teammate: his stirring eulogy at Munson’s funeral in Canton, Ohio, on Aug. 6, 1979. Murcer played for the Yankees that night in New York, driving in five runs, including the game-winner in an emotional ninth inning.

“There’s no words for that,” Monahan said, but the Yankee Stadium scoreboard operators found some. For years, whenever they showed highlights of that game, they played a song that seemed to fit Bobby Murcer: “Forever Young.”
Posted by jtf at 10:25 PM