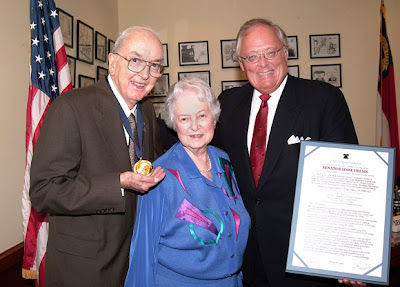 The Authenic Jesse Helms (The one I knew and loved)
By Jane Chastain
http://janechastain.com/

Heritage President Ed Feulner (pictured at right with Helms and his wife Dorothy) presented Helms in 2002 with the Clare Boothe Luce Award, Heritage’s highest honor, calling him a “dedicated, unflinching and articulate advocate of conservative policy and principle.”
Jesse Helms was astute, kind, witty and one of the most polite and fair-minded individuals I have ever known, nothing like the caricature often painted by the media.
I met him in 1967, when I presented myself as a candidate for employment at WRAL-TV. I had broken a lot of barriers for women as a sportscaster in progressive Atlanta, but when I decided to marry Roger Chastain, an industrial designer in Raleigh, I was quite sure my career had come to an end.
The television station in nearby Durham – the only other station in the area – had offered me a job as a weather girl. WRAL was my last hope.
My knees were shaking as I stood in the office of Fred Fletcher, the president of Capitol Broadcasting. Fletcher said, “Sports? You just can’t do sports for us.” That’s when Jesse Helms, his executive vice president in charge of programing, spoke up and said, “Oh, yes she can!” Mr. Fletcher, relented and I was hired on the spot.
At that time, I had no way of knowing what an influence Jesse would have on my life. He did the station’s editorials and he instilled in me – and countless others – a love of country, a sense of personal responsibility and the importance of individual liberty, a strong national defense, the free enterprise system, limited government and strong moral values.
In those days, there were very few women in television outside of secretarial positions and very few minorities. WRAL-TV had more than its share of both. When Jesse Helms was in the United States Senate, the hair on the back of my neck would stand up when I would read that he was a “racist” and “against women.”
I discovered that when liberals have no argument against conservative logic, they call you names. If those names are repeated often enough, some stick.
Jesse Helms not only paved the way for Ronald Reagan to become president, he was his point man in the Senate. He was far to busy working to defend his country from enemies here and abroad to worry about what the newspapers said about him and wouldn’t allow his staff to spend time defending his public image. He wouldn’t go on the popular Sunday morning political shows. He went to church instead.
Like most southern politicians of his era, his views on segregation evolved. However, he was never against equal opportunity or civil rights, only set asides and quotas. He felt they were unfair and demeaning to those they reported to serve, as do many thoughtful black conservatives.
On one of my visits to Jesse Helms’ Washington office, I met James Meredith, the courageous African-American who integrated the University of Mississippi. He was one of Helms’ legislative assistants. I’ll bet you never read that. The media tends to shun black heroes like Meredith, when they refuse to march to the beat of radical leaders.
On another of my visits, Senator Helms expressed exasperation when he told me about a meeting he had just had with a well-known feminist. He had graciously granted her 30 minutes on his schedule. He said, “Jane, she spent the first 25 minutes just berating me for my pro-life views. She never once took a breath!
“When I realized that our time together was almost up, I said, ‘Don’t you have a question for me? Isn’t there something you’d like to know about my stand?’
“She replied, ‘How many unwanted children have you adopted?’
“I said, ‘I regret to say only one,’ explaining that he just couldn’t help myself. ‘It just rolled out!’”
Yes, Senator Helms was reluctant to talk about the fact that he and his beloved wife Dot adopted their son, Charles, at the age of nine, who was suffering from cerebral palsy, after reading in the newspaper that he wanted a mother and father for Christmas.
Conservatism was popular in the 80s because Jesse Helms did the heavy lifting. He laid the groundwork and made the case for it. He was not afraid to confront a president – even one from his own party. He also held the feet of weak-kneed Republicans in the Senate to the fire.
In 1994, he was distressed when Oliver North lost his Senate race in Virginia. He was looking forward to passing the baton to him. When Jesse Helms retired in 2002, it was with trepidation. There was no one to take his place.
Jesse Helms died on the 4th of July, the birthday of our country as did John Adams and Thomas Jefferson. May the selfless – often lonely — battles he waged on our behalf not be in vane.
The article has 10 responses
Written by Jane Chastain
July 10th, 2008 at 12:00 am
Posted in Congress, Political Profiles
Posted by jtf at 3:47 PM